It’s going to be a blue Christmas for Kevin Roper. Today the Walmart truck driver was indicted by a New Jersey grand jury on charges of manslaughter, vehicular homicide and aggravated assault for the now infamous crash that critically injured comedian Tracy Morgan and killed passenger, James McNair. The indictment comes as the long awaited response to Roper’s legal counsel who had asked the court to have the initial charges dismissed. David Glassman had filed the motion saying that his client could not receive a fair trial given the extensive and ongoing media coverage, along with the civil settlements that may also bias the criminal case.

The crash took place on the New Jersey Turnpike in June 2014 as Morgan and several other passengers inside a limousine van were returning to New York City after a performance in Delaware. Prosecutors allege that Roper had not slept for over 24 hours before the crash and that fatigue had played a major role in crashing his tractor-trailer into the passenger van. According to court documents, Roper did not see that traffic ahead was moving slowly until it was too late, and crashed into the back of the van. In addition to killing McNair and severely injuring Morgan, two other comedians, Ardie Fuqua and Harris Stanton, and Mr. Morgan’s assistant, Jeff Millea, were also injured in the crash. Roper had initially been charged with vehicular homicide just days after the incident and he pleaded not guilty. Then, a Superior Court judge had ruled that a grand jury would decide if the case against Roper should proceed. Today, the grand jury made that decision. 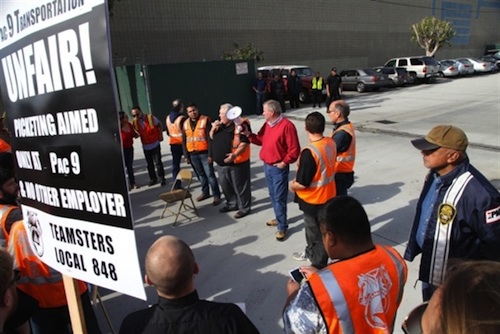 Meanwhile on the west coast, 38 port truck drivers are enjoying a little more Christmas cheer as the California Labor Commissioner awarded them $6.9 million back pay in wage theft claims. In fact, the ruling comes as a promising victory for all port truck drivers and it’s the first time that the Labor Commissioner has issued back-to-back hearings for individual wage theft claims at one company. It was officially determined that 38 port truck drivers who work for Pacific 9 Transportation (Pac 9) are employees, not independent contractors as the company claimed. The ruling subsequently ordered Pac 9 to pay the 38 employees a collective amount of $6.9 million in stolen wages, determining that Pac 9 owes unlawful deductions, liquidated damages, business expenses, meal and rest periods and interest and waiting time penalties to the drivers.

“We have finally had our day in court and we are extremely grateful that the government has realized that it isn’t just a handful of drivers that are misclassified – it is all of us. We aren’t going to back down now. We will continue suing and striking these companies until they end their unfair treatment and the industry abandons the misclassification scheme that allows these trucking companies to steal our wages and defraud the government,” said Daniel Linares, one of the Pac 9 misclassified port truck drivers.

Steven Willard
The driver had been driving along way to get to his truck. He should not have been behind the wheel. That is part of being a Professional Truck Driver. I'm not saying he's at fault. He should have know better than drive.
Dec 24, 2015 8:16pm

Rob Sanderson
I used to own a limousine service and the amazing part about the business is that it has minimal accountability in regards to the hours that chauffeurs work and drive!!! Many a time you would see other limo companies at big events that had you out until 4 or 5 am and then turn around and be doing other events etc first thing in the morning! !!! Many a sleepless night but there sure isn't anyone holding them accountable! !!
Dec 24, 2015 4:42pm

Wendell Yarbrough
Mr. Roper is already convicted and sentenced by the media. His hrs prior to service had nothing to do with dot regulations. And congratulations to the guys in California in their victory in court.
Dec 24, 2015 6:28am

Kirsten Rosseland
I know what you mean. I used to work for a company that pushed me HARD! I quit the day I drove through Michigan and didn't remember any of it. In fact I had a dream abiut my day. Sleeping wirh your eyes open is a real thing. On the other hand YAY TO THE PORT DRIVERS!
Dec 25, 2015 8:57am

Phil Killerlain
Guilty or Not Guilty will be decide by a jury ! ( I hope they can get a few that don't use FaceBook as he is Guilty with no FACTS at all by THE FB jury ) He violated NO DOT RULES OR REGULATIONS ! THE ONLY PROVEN THING IS HE FAILED TO STOP ! The rest is just SPECULATION by the media and FB jury's ! Walmart threw him under the bus along with their INSURANCE carriers by settling to get rid of the MEDIA coverage ! The Insurance carriers are suing Walmart and refusing to pay the settlement amounts agreed to as if the Limo passengers had been wearing seat belts ( AS REQUIRED BY LAW ) most if not all would have walked away with bruises and minor injuries !
Dec 25, 2015 11:13am

Michael Eldred
Complete misrepresentation of evidence, it was obvious the limo driver swerved across the lanes and caused the whole accident..
Dec 24, 2015 12:46am

Tim Scott
It sucks for truck drivers at times like this,we deal with so much from people cutting us off traffic,etc. I see this happen ALL the time drivers getting sleepy all killing there self or someone else,and not being professional isn't the reason its called getting sleepy or being fatigue.. Me being a professional driver I know exactly what happen in Mr. Roper case he was awake with his eyes open and extremely fatigue I'm sure after 24 hours,but what happen is you driving but your mine isn't there so you basically just setting there in a dead state of mind driving on cruise control with your eyes open and with no since of what going on around you til it's to late in Mr. Roper case. Sometimes if u have enough time you wake up and realize u not in your lane or coming up on someone going slower or even parked. Sometimes u don't remember the last 10 miles you drove.. But I can say being stupid played a big factor also cause he should have pulled over and slept for a hour are two,hell he was already pass his hours so it wouldn't have mattered. It sucks to kill someone like that cause it not on purpose it happen its just called being stupid and keep driving like you a machine and caring about the law... Also this happen even when drivers are not passed there hours its just called being fatigue not resting well or even being unhealthy... I'm sorry for everyone cause it was a preventable accident. The jury should be all truck drivers careNightight people don't know what its like operating and driving a Big Rig fully loaded on cruise control Late Night, In A GOOD Truck IT'S Comfortable AS Hell...... And being sleepy just don't mix with that.. OK I've said enough wishing everyone a Merry Christmas and Happy New Year..
Dec 25, 2015 8:35am

Phil Killerlain
That new a truck would have a Vorad system so if he was on cruise it should have stopped of at least slowed more than it did ! Unless like some have said the Limo swerved in front of him !
Dec 25, 2015 11:16am

Gerad Hudson
Two days of not a damn truck moving in this great country of ours would solve a lot of bullshit problems just like this that driver knows if he's sleepy or not you don't need a damn computer to tell you when to start and stop
Dec 26, 2015 4:55pm

Tommy Hamill
Guess all these port drivers will lose there job's or quit because they won this settlement. Maybe if the gov't wouldn't keep coming up with all these regulations forcing small companies to have to consider drivers as contract labor. The gov't is the problem.
Dec 25, 2015 8:54pm

Ronald Hill
Well fellows don't understand all the bullshit- they were looking for a scapegoat to blame big trucks involved automatically the trucker gets hanged. right or wrong now the fucking- government is going to watch us like a dam hawk now e-logs and set back trucks and every fucking- thing is going to go to hell- quick just could not keep from hanging a trucker just of some jackass- comedian and his screwed up side kicks including that damn limo driver
Dec 24, 2015 12:01pm

Douglas Valeria
If he were a doctor wouldn't matter how far he drove to get to work before performing surgery would it .
Dec 25, 2015 4:06pm

Tracy Hart
yea it`s easy for wal-mart to hang out a DRIVER. sure they were patting him on the back for doing a great job, then shit happens and they cut him lose. WAL-MART your a piece of shit.. i been driving 20 years and watched your drivers do everything from drive crazy to get high.i`ve seen lizzards in and out of your trucks, i`ve even watched one driver taking shit from back of trailer. this guys running to pay his bills, you never complained before when he got the job done, BACK HIS ASS UP WAL-MART... or get out of the business. your weak WAL-MART...weak ! who gives a shit someone got run over, i BET YOU they came across on the driver, i bet you he was trying to react to them driving in front of him, thats how they drive in NJ i`m there 5 times a week. UNTIL YOU GET INTO A TRUCK DONT SIT THERE AND CHARGE A DRIVER. your all a piece of shit.....NJ STATE ATTORNEY,STATE POLICE, all of you.... you charge us hundreds every day to use that road, it says TRUCKS/BUSES, but no them god damn cars have to drive on our side....you dont see us driving on the car side, wheres our HELP...you pick and chose who you wanna help or like. you flash them brights into our cabs looking for texting truckers...EVERY and i mean EVERY car that pass me on that greenstamp is TEXTING...how come we dont see you busting them. I JUST WATCHED a tanker on the NJ GREENSTAMP roll off the road and explode, that car that was NEXT to him, she was texting when she passed me.... how come she was NOT CHARGED after one of our fellow drivers was KILLED by this stupid bitch. CAUSE IT`S A ONE WAY SYSTEM IN NJ... you take our money, and you let them take our lives. !!!!!!!!!!!
Dec 26, 2015 9:31am

Tracy Hart
Gerald Gross KMA i`m a driver son. you clearly have no idea why this even happen, you sit and read your news papers and listen to fox lie... thats ok, your the reason why obama has a job... i forgive you... but dont come commenting on something you have no idea how it works.
Dec 26, 2015 5:54pm