A middle aged sheriff’s deputy in Madison County, Nebraska took on the role of Hollywood stuntman when he ran across the highway, jumped into a runaway semitrailer and pulled it to stop before it crashed into a busy viaduct bridge up the road. It was a split second decision that Deputy Todd Volk is saying, “was stupid” in retrospect, but has heralded him a hero since the dash cam video of his stunt has since gone viral. (watch the video here). 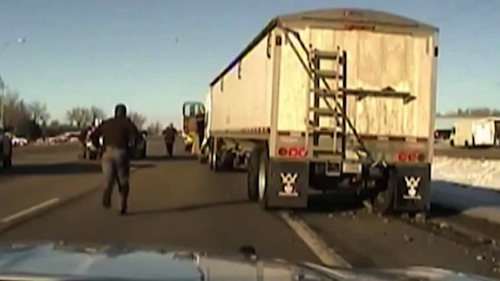 The incident occurred on December 2, when Madison County Deputies responded to a 911 call reporting a reckless tractor-trailer on U.S. Highway 81 heading towards Norfolk. When they caught up with the semi and alerted their sirens for the truck driver to pull over, the truck only continued on its reckless path. Then Volk says they realized the truck driver appeared to be passed out at the wheel and it was later determined he had suffered a diabetic reaction. Not only was Volk concerned about the big rig endangering the lives of other motorists, but it was also heading towards a busy viaduct bridge and he was worried it would crash right off the edge.

At this point the truck was rolling along at about 20 miles per hour and Volk decided there was a chance he could match its speed on foot. "I just had the perfect angle. There's not much speed left in me, but that was just at the right angle for doing that," Volk explains. In a daredevil move made for action movies, the sergeant launched himself out of his Sheriff’s vehicle parked on the left shoulder of the road and ran across the highway and then jumped onto the step of the moving tractor. “You know, there's a little bit going through my head, when I approach it, like, basically this is stupid.” But fortunately Volk was able to keep his balance, while opening the driver’s door and quickly maneuvered the big rig to a stop. It turned to be a smart decision that prevented a devastating crash, saving the truck driver’s life and potentially other motorists.

Since the video has gone viral, Volk says his colleagues have been celebrating his new super hero status. "They've been having a lot of fun with pictures and doing a little bit of, well just having too much fun with me," Volk said. He admits that it was definitely the craziest thing he's done on the job. When asked about the truck driver's condition, Volk is happy to report that he’s doing well and is very grateful for the rescue.

Ronald Hill
boy one thing you folks didn't read in this article was that driver did not know he was a diabetic till this episode. And officer volk- saved that man's life and that tractor trailer if they had not got it stopped would have been tragic people would have either got severely hurt or worse killed so officer volk you are a hero sir congratulations from another trucker family from Topeka Kansas
Dec 19, 2015 10:03pm

Ronald Hill
Kram- drawde- elliven- you don't think that deputy didn't risk his life to save that trucker you are fucked- in the head he did risk his life to save that trucker the man had a medical episode he didn't know he was a diabetic and was rendered down to the point of being unresponsive and that's where deputy volk became an instant hero by running over jumping up on the running board pulled the door open and stated braking it down and stopping it along with getting out of gear so it wouldn't take off again had it made it to that intersection it probably would have been worse with people either getting killed or severely hurt when they collided with that tractor trailer so get your story straight and learn before you comment apparently your not a trucker so you don't know shit- about cops and truckers the cops are out there to keep people and property safe and catch speeders and put people in jail that break the law and at last report as of yesterday the driver was in the hospital in fair and stable condition and thanked those deputies for saving his life
Dec 20, 2015 7:55am

Mark Edward Neville
He didn't risk his life for the trucker.. He wanted to stop it before it came to the busy intersection..read the full story
Dec 19, 2015 9:11am

Cristina Cisneros
It Is a high risk driving too many hours. He save his life, but it is something to think about change the field of work. I will advice to my friend who like that type of work, to do something less dangerous. For his own safety. It is rewardable in money, but money don't bring everything.
Dec 19, 2015 8:04am

Cristina Cisneros
Kevin Richardson I talk for my friend , he just to drive from.south Florida to Nevada, and I know the route also, it is okay for a period of time, but not for a style of life. It is my point of view.
Dec 19, 2015 9:06am

Tony Lazzara
Cristina Ciseneros ,, why don't you read the article the guy had a diabetic seizure or episode ,, geez
Dec 20, 2015 7:46am

Cristina Cisneros
I did still with seizure or not, from my point of view, to make money it is okay temporarily, but not to stay permanent. It is only an opinion. I respect others opinions.
Dec 20, 2015 8:30am