When truck driver Robby Bunn arrived in Muskogee, Oklahoma on Monday evening, he had heard the news on the radio about a manhunt for an accused murder suspect that had escaped from the county jail, but didn’t think much of it. His hours were up, so he parked his truck just off Highway 69 and checked into the Fairfield hotel. “I'm only allowed to drive 11 hours a day. My time was up, so had to stay,” Bunn said. When he woke up early Tuesday morning to start his drive back to Texas and saw that his truck was missing, Bunn just assumed that it had been towed. Then he saw the shattered glass and knew something else had gone down. 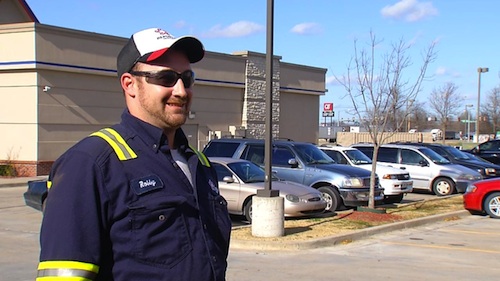 The night before Bunn arrived in town, Paul Newberry and Raymond Noriega had escaped from the Muskogee County Jail. On Sunday evening at around 10:25 p.m., they busted out a window and jumped to the ground. Noriega apparently sprained or broke his ankles from the fall and was left stranded in the bed of a truck calling for help, while Newberry went on the lam. Deputies didn’t even realize the two had escaped until midnight when they heard Noriega’s yells. They took him back into custody and the hunt was on for Newberry. Newberry is accused of murdering 88-year-old rancher, Charley Kirk, during an attempted break-in and had an upcoming court date facing serious charges that include first-degree murder with deliberate intent, robbery and burglary, among others. Police had warned the public that the escapee was desperate and dangerous but after combing the area all of Monday, Newberry was still nowhere to be found.

On Tuesday morning at around 6 a.m. when Robby Bunn had realized his truck had been stolen rather than towed, he called it in to his company dispatcher. Using the semi’s GPS tracking device they were able to pinpoint its exact location to a truck stop in Jarrell, Texas. Bunn said he was surprised to learn his truck was already in Texas before him. “Called dispatcher, asked him where my truck was at and he was wondering why it was going toward Austin,” Bunn said. It wasn’t until he filed the police report that the local news about the manhunt for Newberry popped in his head and he joked about it to the officer. “I said, 'Well, I hope it wasn't y'all's escaped convict,'” recalls Bunn. He may have been joking, but it was the lead police needed. 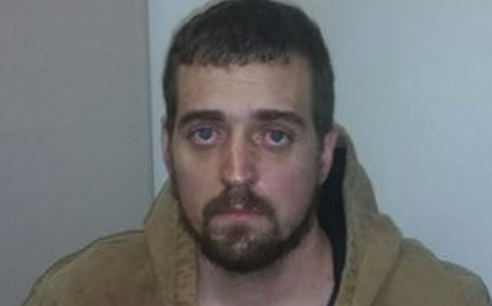 Muskogee County Sheriff, Charles Pearson, said that once they confirmed the missing semi-truck was still at the location in Texas, he called the authorities there to make the arrest. Cherokee County Sheriff’s Investigator James Brown Brown further explained that an officer north of Austin was actually about to approach the semi when federal authorities were alerted that Newberry might be inside. The lone officer was told to hold off while the Texas U.S. marshals raced to the scene. “Marshals in Austin sent some of their task force to the semi and they were waiting on a SWAT team to show up, but before SWAT could arrive, Newberry started up the semi,” Brown said. “For safety reasons, the marshals didn’t want him to get rolling, so they went ahead and arrested him.”At that point Newberry admitted who he was and co-operated as he was taken into custody. He was held in Texas until his transfer back to Muskogee on Tuesday evening.

Meanwhile, Bunn had been left stranded back in Muskogee waiting for his ride back to Texas. “I guess a stolen truck turned helpful,” he said. “But I'm ready to go home.”

Randy Rogers
Reason why every time I leave my truck unattended my war lok gets put on. No matter how secure your truck is, if a thief wants it they'll take it but definitely a deter for the thief to move on.
Dec 18, 2015 10:39am

James Canady
Yes you can...with a conceal carry permit it's just like in your personal vehicle. ..you have to make sure which states recognize your permit though. ..the only states that doesn't recognize mine I don't go to anyway
Dec 17, 2015 6:21pm

Curtis Littrell
You're full of it..the same laws apply to trucks just like any other vehicle on the hiway.You don't need anyones permission.
Dec 18, 2015 11:05pm

Peter Kenworth
Look in not gonna argue with u, in the last twenty years of driving before I retired, I had checked into it and was told not only by DOT but buy guy who worked close with the feds said u had to have a permit from federal government.
Dec 19, 2015 5:26am

Brian Meadows
Like that always stops thieves. Read the article, they broke the window.
Dec 17, 2015 1:35pm

Distance Traveler
The warlock he was talking about it a lock on the air brake valves. If you try to knock it off or pry it off it brakes the air lines and all you air leaks out. So the truck won't move.
Dec 18, 2015 10:20pm

Byron Pertuit
That's the reason to carry a pistol...What if it was a Radioactive or Explosives load stolen by muslims???
Dec 16, 2015 11:43pm

Tim Dalbec
What good would have a gun done in this situation? The semi was stolen before he knew it was stolen. Had he left it in the semi the convict could have used it on the police or other people.
Dec 17, 2015 11:59am

Michael Storay
Well if you are hauling any of that kind of freight you are not supposed to leave it unattended period just because you don't see them doesn't mean their not there people do watch them loads
Dec 17, 2015 8:00pm