A tragic accident took the life of a truck driver on Sunday when his fuel tanker crashed into railroad cars filled with liquid asphalt and ignited a massive fire along Highway 30 just south of the St. Johns Bridge near Portland, Oregon. 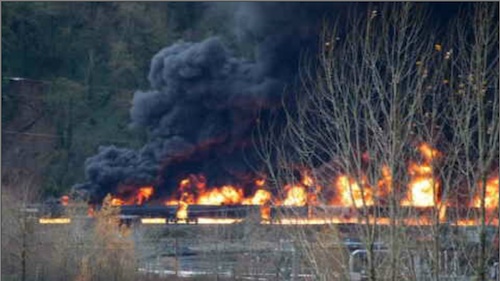 On Monday morning, the deceased truck driver was identified as 41-year-old Andrew Lambert of Vancouver, Washington. According to Portland police, Lambert had been towing a tanker full of gasoline and was heading west on Highway 30 when at around 8:50 a.m. he veered off the right side of the road. The truck went down an embankment and flipped, then collided with a power pole and the train parked on the tracks below the roadway. While Investigators believe that Lambert most likely died immediately, it is still unknown what caused him to lose control of the truck. However, the tragic result was that not only did he lose his life while on the job, the impact ignited a massive fire with 70 foot flames. The crash also caused a leak in the fuel tanker and the gasoline caused the fire to burn for over an hour before Portland Fire and Rescue crews were able to get the blaze under control. 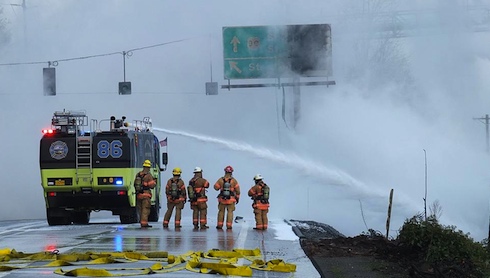 Richard Marcotte lives in the otherwise peaceful Willamette river area and said he was woken up by the sound of the massive explosion. "I heard some sound like big heavy fireworks or like a train crashing together ... that woke me up," Marcotte says. “I looked through my window and saw big smoke coming from the trains.” The fire spread to eight railroad tankers and the black smoke could be seen for miles away. The bad air quality also concerned health officials enough to warn local residents to stay indoors and forced the closure of a local half marathon that was already underway. Highway 30 was also shut down at about 9:00 am and although the Portland firefighters were able to contain the fire by 10:30 am, the highway remained closed while authorities investigated the crash. The Oregon Department of Transportation finally reopened all lanes of Highway 30 near the St. Johns Bridge early Monday morning.

While, medical officials have not yet determined the exact cause of the crash, they believe Lambert either fell asleep at the wheel or had some sort of medical issue prior to running off the road. Rescue crews said that the fuel truck was completely destroyed in the crash and at least eight railway cars were damaged in the flames but the asphalt in the cars did not leak or catch fire.

Marquita Lowry Carroll
"The truck went down an embankment and flipped, then collided with a power pole and the train parked on the tracks below the roadway."
Dec 14, 2015 2:38pm

Steve Barnett
I hauled fuel for 23yrs until I started having panic attacks brought on by home problems, ignorant customers and dispatchers! To this day I don't know how I did it without killing myself self or someone else! My condolences to his family! What always bothered me is you always hear about the crash but you don't hear about the millions of safe loads that are hauled every day! Thank you tanker yankers!!
Dec 17, 2015 8:19am

Jeff Cunningham
Funny your top post is about worshipping Him but you sit in judgment of others. Nice..... Oh by the way it's patience. Learn to spell before you judge others
Dec 15, 2015 6:55am

Marquita Lowry Carroll
Or...... What the article said: "The truck went down an embankment and flipped, then collided with a power pole and the train parked on the tracks below the roadway."
Dec 15, 2015 7:00pm

Jeff Cunningham
No Terry Perrott I'm not perfect and don't claim to be but I was just observing someone that acted pious on their personal fb page make a judgemental comment here and therefore I chose to recognize his own imperfections but apparently that was over your head or you was too stupid to make that observation
Dec 16, 2015 2:44am

Donald Gough
Me too Cathy McQuistion that guys comment pissed me off. I've seen it up close 1st hand. Usually never turns out good for the driver.
Dec 16, 2015 3:15pm