Since its Thanksgiving and all, let’s take a break from the trucking tragedies and industry politics to enjoy this true tale of two turkeys who escaped from the back of a truck en route to the slaughterhouse and are now being haled as the “luckiest turkeys in the world.” 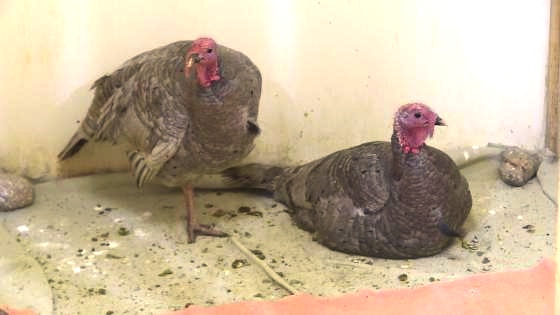 The escape tale started last weekend when a truck was hauling crates of turkeys along State 29 near South 48th Avenue in Wausau, Wisconsin, speculated to be en route to a local slaughterhouse. According to Wausau Police, two turkeys managed to escape their crate and fell off the back of the truck, unbeknownst to the truck driver. The truck simply kept driving along its way and the birds, sensing they were free, officially went on the lam. Of course, it was only a matter of time before someone spotted the feathered duo near the highway and called the cops. When officers showed up at the reported location, they found the turkeys lounging under a tree near the highway. But when the birds spotted the pigs, they again made a break for it and bided themselves more time while the officers called a local wildlife rehab operation, Raptor Education Group, to assist them. They got a hold of the group’s Executive Director, Marge Gibson, who told them that they were too busy at the time handling other matters but she found two volunteer from another local group, Wild Instincts, to go lend a hand. 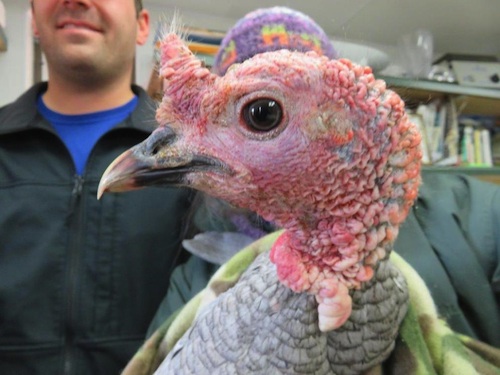 When the two volunteers, Mike Disher and Tom Rueger, arrived at the scene, the police had already managed to get one of the turkeys back into its crate, but the second wasn't going down without a fight. Disher said it took all four men and a long 15 minutes of running alongside Highway 29 to corral the bird and drape him in an emergency blanket to calm him down enough to finally put it in the crate. And as luck would have, the turkey’s escape led them to a far better fate than being part of this year’s thanksgiving feast. When they were delivered into the hands of Marge Gibson, she immediately recognized they weren't just table turkeys, but rather blue slate turkeys, listed as a critically endangered breed by the American Livestock Breeds Conservancy. "Falling off a truck on the way to market has pardon written all over it. An accident that could have killed them both actually turned out to be the luckiest thing that could have happened to them," said Gibson. She immediately settled them into her home on the center's property and has since reported that the now infamous turkeys are comfortably recovering from the leg injuries they suffered in the crate crash and will surely spend this thanksgiving - very thankful indeed.

Dale Hunter
Don't worry we'll have them over for Christmas dinner,it won't be Christmas without them.
Nov 26, 2015 12:36pm