With Black Friday and Cyber Monday upon us, companies are feeling the nationwide truck driver shortage worse than ever before. Especially with the US economy seeing its strongest year since the recession ended in 2009. While some argue that the shortage is a myth in itself or a result of an overall ploy to keep salaries low, many hiring companies are saying otherwise. In fact more and more companies are offering higher salaries, more home time and whatever else they can do to attract more qualified drivers. With “qualified” being the operative word here. 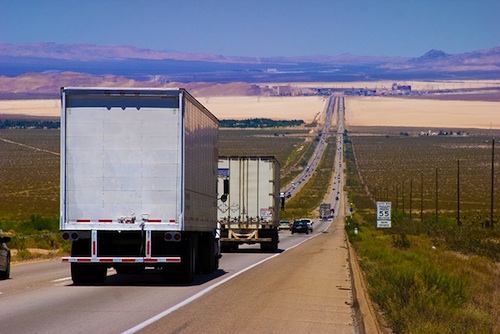 “Fleets consistently report receiving applications for open positions, but that many of those candidates do not meet the criteria to be hired. According to our research, 88% of carriers said most applicants are not qualified,” says ATA Chief Economist Bob Costello in a recent report. "If the trend stays on course, there will likely be severe supply chain disruptions resulting in significant shipping delays, higher inventory carrying costs, and perhaps shortages in stores," the report warned. The report also acknowledged that a major part of the problem is the job’s accurate reputation for long hours and weeks away from home. The ATA said that addressing those problems is the key to fixing the shortage and listed “increasing driver pay, getting drivers more time at home, as well as improving the image of the driver and their treatment by all companies in the supply chain” as the most realistic solutions.

"Every one of my members is looking for drivers," said Jim Runk, president and CEO of the Pennsylvania Motor Truck Association. After 47 years in the trucking industry he says the shortage "is as bad now as it's ever been." Jim Germak is one such employer that has been feeling the reality of the shortage and explains that usually five or six of his 40 trucks aren't operating simply because he doesn’t have enough drivers. He also knows that experienced drivers are going to the companies that offer newer equipment, better pay and even signing bonuses of up to $5,000. In addition to offering his drivers an 8 percent pay raise, Germak has begun scheduling his drivers for more regular home time and has instructed his dispatchers to adjust routes for drivers to get home in time for important family events. He says that he has also invested money on outfitting his trucks with comfort features such as refrigerators, better heating and air conditioning system, and more comfortable driver seats. "We probably have every amenity available," Germak said.

But while it remains a challenge for companies to recruit and retain “the cream of the crop” experienced drivers, the profession is managing to attracting more newcomers, such as Toby McGuigan. The former tow truck driver and crane operator is currently attending truck driving school and is looking forward to a career switch that will allow him more freedom and more opportunities. “I like the idea of being on the road and being your own boss. There's so much opportunity, not to mention good money," he says.

Kate Campbell
Treat your drivers better and pay them a living wage and you will retain good drivers.
Nov 23, 2015 3:31pm

Robert Cook
More like why did they Fuck up our hours of service. I run loose leaf but man if didn't well shit I'd lose my ass cuz if I'm not motivated to drive today I can pull over enjoy a walk then hit the road and repeat till I'm tired. Forcing driver to sit in that seat on days they are stir crazy is very dangerous. And then we lose another good driver over a stupid mistake
Nov 23, 2015 3:10pm

James McCreight
Treat drivers with more respect. At least us professional ones. And to keep your turnover rate down? How about more than a little over McDonalds management wages/salaries. I'll tell you this, autonomous vehicles won't work for the industry any time soon.
Nov 25, 2015 2:20am

Joseph Scott Jr.
Well if the wages more directly reflected the ACTUAL time a driver spent on work related tasks, maybe people would consider it. The median age of drivers is constantly going up because younger generations are not willing to sacrifice the huge amount of time and dedication that this line of work requires. There are too many other jobs with comparable wages that require much less of a person. I spent my time getting paid by mileage and getting screwed on driver unloads, then paid percentage when working for an O/O. Then got paid trip pay for a local company. Currently I get paid hourly, OT after 8, and full benefits. This is the way it should be. No need to be in a rush, take your time and drive safely. Get held up at shipper/receiver/traffic? No problem. Pay a driver for the time they have into their job and people will want to do the job and take pride in it.
Nov 24, 2015 3:33pm

Ryan Pitre
That's why they trying to force owner operators out with all these regulations so they can go out of business and become a number for one of the federally owned fleets!
Nov 24, 2015 1:52pm

Eri Rexach
Better pay,paying them while they are at the shipper waiting to get loaded,the same thing at the receiver.
Nov 23, 2015 4:49pm

Donald Gough
I'd like to drive 2 day a week part time. Something local. Medical reason.. but can still drive. No body wants part time. But they are sreaming for drivers. Lol
Nov 23, 2015 4:40pm

Rodney Hoskinson
It's a darn good thing some idiot driver recruiter doesn't tell me I have to stay out 3 weeks to get 2 days off I'd bust his nose
Nov 24, 2015 10:28am

Brandon Tune
Only gonna get worse if the government continues to get there way n mess with our regulations n force electronic books
Nov 23, 2015 9:14pm

Jon Carroll
Why yes there is a shortage of drivers...plenty of jacked up steering wheel holders out there that cant even drive a riding lawnmower but yet mysteriously hold a cdl and that is where the problem lies. More damage = higher insurance..more repair costs so the co panies compensate by short changing the drivers. Experience still means something to some ..but most would rather have an underpaid id 10 t..that cant speak English do the half azzed job for them.
Nov 25, 2015 3:51pm

Floyd Fuller
Maybe if the big companies would stop hauling cheap freight us little guys could stay a float. So I say let there be a shortage of drivers for six months or so.
Nov 23, 2015 3:47pm

Priscilla Wilson
I want to join the trucking industry and have a felony that is old as hell can pass a drug test yet can't even get accepted to a truck driving training class through any trucking company. What's up with that. Who will train and hire me??
Dec 21, 2015 9:18pm

Mike Matevich
Driver shortage isn't a myth, it's a lie. Explain to me please, IF there's a driver shortage there should be excess freight right? I left my last three jobs for lack of miles....hmmmm
Nov 24, 2015 7:14am

David Jenkins
I agree there is a shortage of good drivers .because all companies want to do is screw you.
Nov 25, 2015 7:46am

Kyle Knoblock
No driver shortage, in fact there's to many trucks and not enough freight which is why freight that was once moving for 2.50 is now moving for 1.25 and also because these larger companies can afford to haul that cheap Shit putting a hurting on us little guys.
Nov 25, 2015 5:33am

Terry Hackenberg
Never was a shortage of drivers . There's a shortage of freight and by flooding the industry with all these rookies they can get their cheap Ass freight hauled for even less !!
Nov 25, 2015 10:26am

Erick Painter
I'd like to thank the ATA and all the big companies for keeping wages low. Influencing eld legislation and basically churning through drivers like chattel. You are getting what you wanted and you are crying about it. Grow up. Let me drive the way that is best for me. I guarantee you we will both prosper.
Nov 23, 2015 4:29pm

Erick Painter
You have a better Chance of seeing a unicorn before drivers do that.
Nov 23, 2015 9:01pm

Bill Hibberts
Wouldn't be a shortage if isis got after carb Thay have put a lot of trucks out of business and putting more out everyday
Nov 23, 2015 7:50pm

Neal Newsome
The ONLY reason there's a supposed shortage is because of the requirements built into dedicated contracts to provide certain numbers of trucks. Many of these trucks are sitting. There's an overage of drivers.
Nov 24, 2015 2:34am

Robert Fonalledas
Well that's what happens when you shortchange good drivers
Nov 25, 2015 5:39am

Rick Mitchell
The only shortage I see is the shortage of good safe parking and as for union really know too many who have retired from driving and are having to work other jobs because the Union cut their pay and bennies doesn't sound like the answer to me
Nov 24, 2015 5:29am

Duane Henry
Good. Maybe then can hince the reality of trucking. We're not here for vacation so treat us like a worker.
Nov 24, 2015 4:30am

Antonio Robinson
Here is something that would help alot. START PAYING YOUR DRIVERS AND YOU WOULDNT HAVE A SHORTAGE.
Nov 29, 2015 12:20am

Daniel Chapin
Good, maybe you company assholes along with the DOT assholes will leave us alone and let us do our jobs.
Nov 24, 2015 5:57am

Gary Teague
True. And the companies are creating their own problems. If they weren't liars, dishonest, and plain old one way, they would attract good drivers and keep them. There is no legitimate reason to keep a driver out more than two weeks without home time. And so, they are their own worst enemy.
Nov 24, 2015 7:09pm

Gary Teague
I probably average 4 days a month. Sometimes more. Sometimes less. But they do give me the time off I ask for. But there are so many companies that I've came across that totally don't get it.
Nov 25, 2015 5:48am

Kurt Gunar Hilpert
It's funny, cause half these steering wheel holders don't belong on the highways to begin with,... You get what you pay for...
Nov 23, 2015 4:32pm

Joseph Fields III
I see all these comments and not a one can figure out why drivers are paid little to nothing and no benefits.. It's call organization a UNION, there is hardly no turn over in Union shops, if someone leaves everyone knows because it's un common.. Right now as I leave this message I'm getting paid to wait.. If a driver has to wait for a load, they should get paid. I think it's sad that I bet every person commenting in here say they don't need a Union!?!? But you do.. Union up drivers
Nov 23, 2015 9:39pm

Samuel Lee
Bullshit. More drivers drives down pay, which is abysmal to begin with...why do you think t hey would hire illegals if they could??
Nov 23, 2015 6:32pm

Billy Zirkle
So sad but I don't see it getting better and the trucking life isn't as cool as it once was. We used to do real well money wise but it's not there anymore.
Nov 25, 2015 8:12am