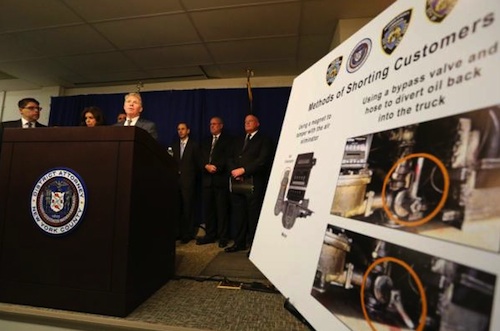 Mark Peters, Department of Investigation Commissioner, is one of the authorities that issued a detailed report about the extensive two-year investigation resulting in the indictments and arrests of 44 people from nine fuel delivery companies. The report lists nine companies involved in the alleged scam: F&S Distribution, Casanova Fuel Oil, Express Petroleum, G&D Petroleum Transportation, Inc., G&D Heating Oil, Inc., 4th Avenue, All Boro-Transportation, Enterprise Transportation and Century Star. Instead of delivering full orders to their customers, the companies are not only accused of skimming some off the top, but then selling it on the black market as well. The suspects are charged with routinely stealing heating oil from both private consumers and city agencies at an estimated cost of at least $18 million annually. "The city spends millions of dollars each year on fuel deliveries to agency buildings, money that is literally being siphoned by unscrupulous fuel delivery companies through various fraud schemes," Peters said. "Our report on this investigation sets forth new internal controls that will stem the tide of shorting with real solutions and reliable protocols that protect the integrity of the industry and the city's coffers." 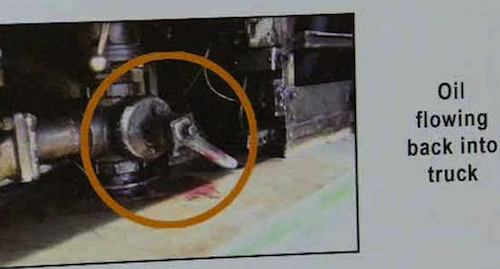 While it has yet to be revealed how the truck drivers directly benefited from the scam, prosecutors allege that the fuel delivery trucks were equipped with "diverter valves" that gave fake readouts of how much oil each customer was being delivered. The oil delivery drivers also allegedly used other tricks to fool measuring devices specifically designed to prevent fraud. Although these indictments are the latest in decades of fraud allegations with the New York City's lucrative heating-oil industry, the previous scams mainly involved oil being diluted with used oil, diesel and motor oil, or even "sludge residue from boilers." Authorities said Tuesday that while many such operations are still continuing in the city, this alleged scam was "the prime one overcharging by the millions."

Dennis Bergholz
Wtf there not there the only ones the fuel stops for truckers are beating us out of fuel
Nov 12, 2015 11:55am