A mystery truck driver is being hailed a hero after rescuing two women who were submerged in water after their SUV ran off a bridge on the 1-10 near Scott, Louisiana. The incident happened on Saturday just before 3 a.m. and according to Scott Fire Chief, Chad Sonnier, the driver of the SUV drove through the guardrail of a bridge at mile marker 99 and landed upside down in a ditch, partially submerged under water. 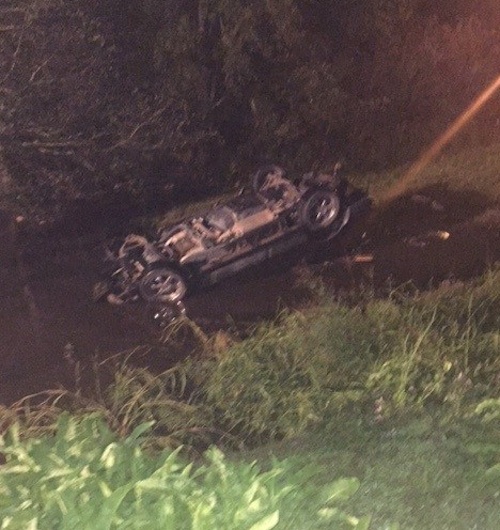 Sonnier said when emergency personnel arrived at the scene, they noticed a man near the vehicle, standing in chest deep water with the two semi-conscious females he had pulled to the edge of the water. All that is known about the truck driver is what he told rescue crews: That he had been driving his tractor-trailer on the eastbound I-10 when he witnessed the SUV drive off the bridge. He said that he saw both females ejected from the vehicle and when he pulled over his tractor-trailer, he saw them floating face down in the water. That’s when he realized he needed to act fast, so he jumped in the water and pulled the women to safety.  Sonnier said that as soon as their crew arrived and the truck driver was assured the women were safe with the medical care they needed, he quietly left the scene and drove his tractor-trailer off into the night. The man has not yet been identified but Sonnier wants everyone to know that if it wasn't for his courageous act of pulling those women from the water, they may have very well lost their lives.  “In today’s world, many are hesitant to assist total strangers. Emergency medical officials firmly believe this act of kindness, may have saved two lives,” Sonnier said.

Scott Firefighters and Acadian Ambulance personnel took over the rescue operation from there. A fire department ladder was deployed across the water and rescue workers used it as a bridge to safely move the victims to the ambulance. Both women were each secured to a spine board and medical personnel were able to stabilize them before transporting them to a local hospital. While it is still not known what caused the SUV to go through the guardrail, authorities have confirmed that the two women suffered moderate injuries as a result of the crash but are expected to make a full recovery.

Tristan McDonnell
It's our responsibility to be the first responders, at least within our abilities, to the scene of an emergency if ems or police aren't already on scene. Its part of being a professional driver.
Nov 09, 2015 7:18pm

Richard Cuppy
dont blame him save there lifes and left the way he did today's word is the 2 women could have filed a bad report on the man like he touched me in the wrong spot you got to be be a angle and ho on here is to that angle god bless u sir from one driver to the next
Nov 11, 2015 3:55pm

Steven Mees
Google Cassidy boon guy saved her from drowning n she's accused him of rape for grabbing her arm. Several ppl at the scene. Unfriggin real.
Nov 12, 2015 4:22am

Richard Cuppy
dont blame him save there lifes and left the way todsys word is the 2 women could have filed a bad report on the man like he touched me in the wrong spot you got to be be a angle and ho on here is to that angle god bless u sir from one driver to the next
Nov 11, 2015 3:55pm