Well, California Finally Got Its Rain...


The most recent heat wave has had the already drought stricken state of California praying for rain and on Thursday the skies finally answered with an explosive succession of heavy downpours drowning areas of northern Los Angeles County throughout the evening and into Friday.  The extreme change of conditions also resulted in flash floods and deep mudslides trapping hundreds of drivers overnight and closing nearly 40 miles of Interstate 5. 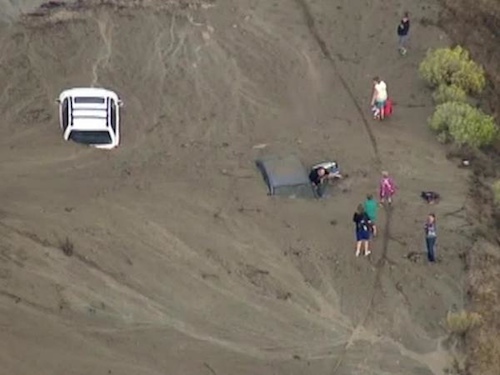 As huge golf balls of hail added to damage around Lake Hughes and parts of the Palmdale area, nearly 200 vehicles including 75 big rigs and two tour buses full of passengers got trapped in nearly 20 feet of mud and debris along highway 58 near Tehachapi. As the torrential rains relentlessly continued to pummel the area, multiple mudslides created chaos for commuters traveling on the Tehachapi Pass in Kern County. Ray Pruitt of the Kern County Sheriff’s Department confirmed 115 passenger vehicles, tractors-trailers and tour buses were swallowed by the mud. “I have never seen slides like this,” he said.

And in all his time on the road, truck driver Shannon Doyle hadn’t seen anything quite like it either. He had been driving east on the 58 when rain and hail first started pouring down and the poor visibility brought the traffic to a crawl. He said that all the truck drivers in the area began talking to each other on the radios all saying the same thing. “Everyone was saying, ‘Can’t see. Can’t see,’” Doyle said. Then he said he happened to spot something coming from his left and saw what looked like a huge waterfall pouring from a canyon. Before anyone had a chance to realize what was happening, the water and mud completely engulfed the vehicles stuck in the highway traffic jam. “It was just a mess,” Doyle explained. 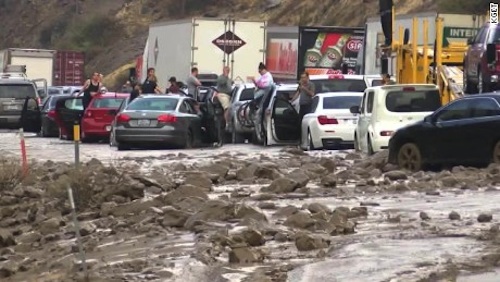 Doyle says that he had no choice but to stay in his truck for a few hours until about 9 p.m. when he finally felt it was safe to get out. Then he and other stranded truckers began to search through the swamp of mud and cars, looking for people who might need their help. He spotted a group of four women who were already trying to flee the highway on foot and he said they were covered in mud as they sloshed their way down the road. It wasn’t until about midnight that search and rescue crews started to appear followed by heavy equipment that began clearing the mud from the road. “We couldn’t go anywhere. We couldn’t do anything. It was crazy,” Doyle says. By morning the crews had cleared enough mud to start allowing tractor-trailers carrying horses and cattle to make their way out. Doyle said it wasn’t until about 9 am Friday that he was finally able to turn his truck around to head back to his home in Fresno.

Lester Proctor
It was pouring in Barstow for a bit yesterday lots of water and mud in spots on 15 but not near what they had on 58 ovee tehatchabie or on 5 over the grapevine
Oct 19, 2015 7:50am

Samuel Lee
The drought and other disasters will continue until tax and gun laws change.
Oct 18, 2015 4:52pm