A tragic accident in Texas killed a family of five (including an unborn child) early Monday morning on the westbound Interstate 20 in southern Dallas County. While the incident is still under investigation, officials believe that shortly after 6:30 a.m., a passenger vehicle slammed into the back of an 18-wheeler log truck and caused the truck's fuel tank to explode into flames. 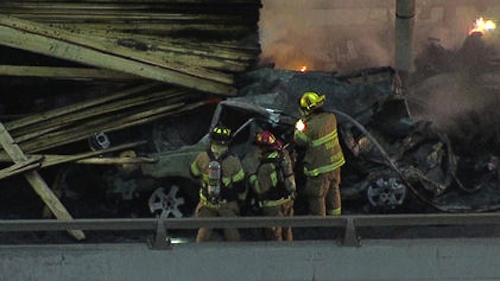 The fire quickly spread to the lumber and the flames grew more intense as they spread across the road. Then, the flaming lumber fell into the area directly below the bridge and ignited a second fire. Early morning commuters saw the early morning sky lit with flames as the entire ramp from westbound Interstate-20 to southbound I-35E was engulfed for about an hour. Crews with Dallas Fire Rescue were quick to respond to the scene and used water and foam to put out the blaze, and tossed wood from the overpass onto the ground as they worked to try and clear the scene. By 7:30 a.m. most of the fire on the ramp had been extinguished, and the fires underneath the bridge were completely out.

Officials still aren’t certain as to whether or not mechanical issues caused the collision and there were earlier conflicting reports as to the exact number of victims it claimed.  But as of Monday afternoon they have confirmed that five people in the passenger vehicle died and tragically, it was a family of two adults, two children and an unborn child. Raul Reyna of the Dallas County Sheriff’s Office says the passenger vehicle became wedged under the truck and that is when the fuel tank on the truck exploded. “Both vehicles became engulfed in flames. The secondary vehicle was wedged between the cab and the trailer,” said Reyna. “The victims were all in the vehicle, the secondary vehicle. The tractor-trailer driver did make it out okay.” The truck driver was also coherent enough to speak to investigators following the incident and told them that he didn’t know if his truck had blown a tire or if the passenger vehicle was stalled on the ramp. Investigators say the heat from the blaze was so intense that they haven’t yet been able to determine the exact cause of the collision or even the make or model of the passenger vehicle. 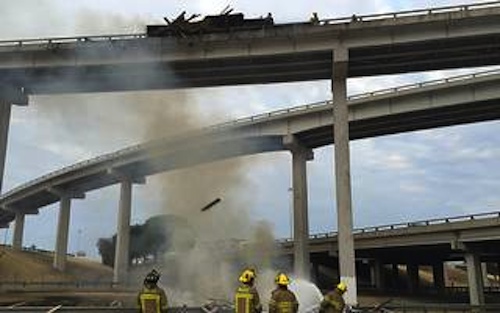 The ramp has remained closed Monday afternoon as Texas Department of Transportation engineers are still determining if its structural integrity was compromised. There is still no word on exactly how long it will be before the ramp is reopened.

Grant Knight
Story doesn't make sense. How can a car slam into the rear of a semi trailer and cause the fuel tanks to explode. Diesel doesn't explode it's combustible. The story corrects it self
Oct 06, 2015 6:26am

Mark A Fitez
I'm glad you said it I seem to piss everyone off when I do the whole story makes no since they ran into the rear and the truck exploded then if you read what the driver said he says he doesn't know if he blew a tire or if the car was broke down on the exit ramp
Oct 06, 2015 5:55pm

Trucking Unlimited
Apologies, it should read that it was first believed/reported that the vehicle ran into the truck and then later reports indicated the driver and investigators were unclear as to what actually happened. There were other later reports that even said the log truck may have been stalled on the road...
Oct 06, 2015 7:23pm

James R Maxwell
There are pieces of this puzzle all over the place...... Car slammed into rear of TT Car stalled on ramp Truck possibly blew steer tire
Oct 07, 2015 8:44am

Trucking Unlimited
there were early reports about the car rearing TT, then later reports about truck blowing a tire, stalling etc....they won't know for sure until further investigation...the truck driver said he wasn't even sure what happened!
Oct 07, 2015 12:31pm