Investigators say it was an SUV’s blow tire that triggered a tragic chain reaction crash on Interstate 59 in Birmingham and ended with the death of an Alabama truck driver. Today, the Jefferson County Coroner's Office identified the victim of Thursday’s deadly crash as 56-year-old Charles Ward Miller from Ethelsville in Pickens County. 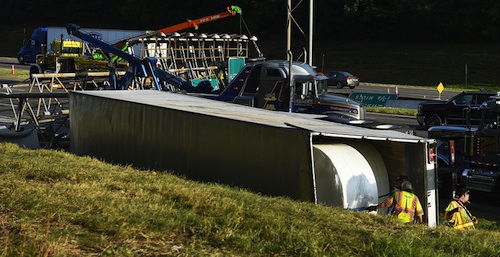 The accident occurred on Thursday afternoon at around 3 p.m.in the southbound lanes of I-59 near the Arkadelphia Road exit. According to Chief Deputy Coroner, Bill Yates, Miller had been driving an International tractor-trailer for Jeff Chisholm Trucking LLC in Mississippi. A Ford Explorer had also been driving southbound when the driver felt the SUV begin to shake before blowing its tire. The driver told authorities that she wasn't sure what happened after that, but she felt something hit her and it caused her to come to a complete stop in the exit lane to Arkadelphia.

But the driver of a Ford Escort had also been traveling in the southbound lanes and saw how it all went down. She told police that she first saw the Explorer's tire blow and when the Explorer lost control, it hit the tractor-trailer. The collision caused the truck to run off the road and crash into the support beams for the large interstate directional sign. The sign then fell onto the roof of the tractor-trailer, and also across all lanes of the I-59. While it is unclear what caused the tractor-trailer to end up overturned in the ditch, Birmingham Police Officer Chris Robinette believes the SUV pushed the truck across the road, until it rested in a ditch, and before nearly hitting another car. 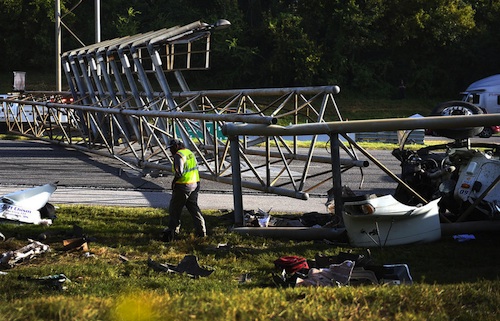 The most tragic end to the accident was that the truck driver, Charles Ward Miller, was pronounced dead on the scene, shortly after emergency crews pulled him out of the cab. Crash investigators have determined there was no other option for the parties involved and nobody is being charged for what occurred.

But truck driver Stephen Hamill, who regularly drives from Missouri to the south isn’t so sure. "At this point, I can't speculate that this could have been avoided. But If they jump out in front of you, you hit the brakes, you will lock it up but will not stop," said Hamill. He thinks that too many motorists make the mistake of assuming truckers can react better because they’re sitting higher up in cabs and get a better view. "Be aware. We can't stop on a dime. We make wide turns. If you're weighing 80,000 lbs, you are not going to stop," Hamill added.

Bryan Jaynes
This was a friend of mine that lost his life. He left behind a lovely wife and three kids. Roll on Chuck! May the Lord be with you and your family.
Sep 26, 2015 12:19pm

Trucking Unlimited
So sorry, this happened to be your friend as well! Our thoughts are with his loved ones and those who loved him.
Sep 26, 2015 8:44pm

Pat Offenberger
My sympathy for your loss, and especially for his family's loss. Ya'all are in my prayers. And please, everyone else, be careful out there. I know I watch way closer than I ever have through better than 40 years running trucks, I only pray that I'm able to avoid a fate like this. We all pray that we return safely to our loved ones. Way too much is out of our control.
Sep 26, 2015 9:47pm

Kenny G Simms
If it was the truck driver's tire that blew out n killed sombody it would of been his and vehicler manslaughter and some more shit, R.I.P Driver
Sep 26, 2015 10:51am

Jerry Mark White
R.I..P. DRIVER! As a driver myself we get cut off daily by 4 wheelers and Lawyers try to pin it us! Praying for his family and friends but hope they get part of what's owed them! America couldn't survive without Big Rigs on the roads! God Bless and keep all drivers safe...... ROLL ON DRIVER ROLL ON!
Sep 26, 2015 11:56am

Christopher David Grandy
How about a pretrip on the four wheeler look at the tires
Sep 25, 2015 8:40pm

Kenny G Simms
Picture that we as truckers would enjoy having the big rd all to ourselves,without having to deal with some of them fools out there
Sep 28, 2015 1:32pm

Charles Napier
Some of the most inconsiderate drivers on the road I hate to say are the new breed truck steering wheel holders still waiting on seeing one run over one of us while they race threw parking lots and pray for all drivers and families for none of us out here know when it's our time
Sep 28, 2015 2:08pm

Ryan Miller
No charges filled???? WTF??? How about vehicular manslaughter for driving with shit tires or probably using the phone. Double standards like this are sick!
Sep 26, 2015 11:57am

Ranj Singh
Awesome! Really does sum up the laws. Make no sense whatsoever some of them. I stopped at mile mark 623 I-5 NB in California at might. Wanted to go to 630 but couldn't keep myself awake. Woke up 7 hours later and headed to Corning Truck stop to get stopped by CHP. Issued me a ticket for logbook violation and 8 hours OOS. My need for restrooms made no difference. He was however happy to drive behind me and let me use the restrooms and cite me after. Could I of gotten into an accident in 7 miles? Possibly, but I thought these laws were to stop drivers who kept on driving for hours past their 11 or 14 but not in my situation. It's nice to have a job where you have restrooms readily available and a home.
Sep 27, 2015 1:56am

Tommy Hamill
More double standards with this. How many times do you see Car's and heavy SUV's running down the road with a low tire. Have tried to flag them down pointing at the tires they look at you like what. Had a pickup trk with a low tire about flat tried to warn her. She blew the tire as I passed her. Luckily she was in the right lane and pulled up on the shoulder. Praying for the family.
Sep 28, 2015 8:38pm

Jessie Thompkins
Bryan, sorry for the loss of your friend, thoughts and prayers. R.i.p driver. I'm a trucker myself. take care.
Sep 28, 2015 9:29am

Bryan Jaynes
We as truckers have alot of responsibility on us. It was a tragic accident and he was not at fault. He went home to be with the Lord !
Sep 28, 2015 5:57pm

Jessie Thompkins
Amen brother. Take care and be safe driver. I'm from Birmingham so it really hits home. I blast my air horn everytime I past by.
Sep 28, 2015 6:15pm