After a truck driver was killed last week at the Port of Long Beach, the family has been demanding more answers and has publicly stated that the port has not been forthcoming with information despite their numerous calls. On Tuesday, the family held a press conference along with their attorneys and the International Brotherhood of Teamsters asking for the port to provide more information and for public’s help in finding out what happened to 26-year-old William Vasquez. Vasquez worked as an independent contract truck driver for California Multimodal LLC and was killed on September 16 while he was working at the Long Beach port. 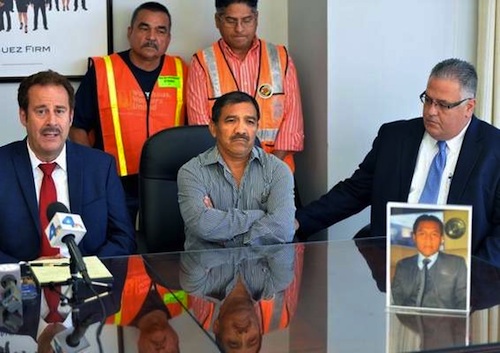 On Wednesday, the Long Beach Police Department responded by releasing more details to the media. According to LBPD press release, the Long Beach port police responded to an accident at 700 Pier A Way, at around 8:47AM on Wednesday, September 16. They discovered William Vasquez lying on the ground next to a trailer and about 30 feet behind a 2009 Sterling 3-axle tractor. Investigators believe he had exited his tractor without putting it in park or setting the emergency brake. They say that he had also been on his cellphone at the time and when he tried to unlatch his trailer, it slowly began to roll forward and struck him. Vasquez was pronounced dead at the scene by emergency responders from the Long Beach Fire Department.

At the Tuesday press conference held in Los Angeles, the truck driver’s father, Wilfredo Vasquez, said that immediately after he was told that his son was in an accident, he rushed to port. “I was calling my son in hopes that he would answer and that would mean he is alive,” Vasquez said. He also said that this is the hardest thing he has dealt with as a father and that he has not yet seen his son’s body. William Vasquez had been a truck driver for 3 years and his father said said that he had worked hard to recently lease a new car and was very excited that he had just gone into escrow on a house. The family’s attorneys, Juan J. Dominguez and George Singer of The Dominguez Firm said that in the days following Vasquez’s death, the family wasn’t able to get any information about the obvious questions they wanted answers to and that the port wasn't even returning their calls. On Tuesday's press conference, Dominguez told the media that it wasn’t acceptable to the family and that as their lawyers they intend to seek the truth and would even take legal action if necessary. “The family is owed an explanation and the family wants to know what happened at the port,” he said. 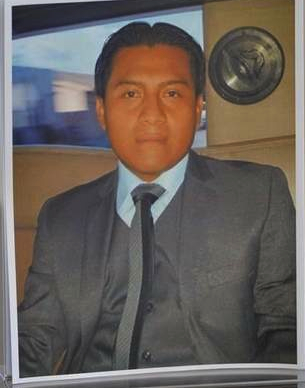 Also on Tuesday, port Chief Executive Jon Slangerup made a public statement about Vasquez’s "unfortunate" death. “Our sympathies go to his family and friends. Cal/OSHA is currently investigating his death,” he said. The family has not yet commented on whether they are satisfied with the details provided by the Wednesday press release issued by the LBPD. In the meantime, a spokesperson for Cal/OSHA has confirmed it is also actively investigating Vasquez’s death but could not release more information at this time.

Joseph Scott Jr.
There IS no "park", and it is totally plausible that he forgot to set the brake and got run over by his own truck. Are they really that determined to place blame on someone and not accept that he may have lost his life due to his own negligence?
Sep 23, 2015 4:17pm

Lester Proctor
I bet 90% of the drivers out here at least once in there careers has forgot to set their parking breaks but few will admit to it
Sep 24, 2015 5:36am

Paul Infante
Happened at a warehouse I worked at. Driver walked into the building, cab was rolling slowly away. someone jumped in the cab and had to pull the brake
Sep 24, 2015 2:55am

Gary Rogers
Key words , "independent contract truck driver," if the man was paid by the hour, and possibly in no hurry, well, you figure it out. Safety Safety Safety, get it? Got it? GOOD!!
Sep 23, 2015 5:47pm

James R Maxwell
Because people getting paid by the hour don't make stupid mistakes?
Sep 25, 2015 10:24am

Ray Cunningham
You all want hourly pay go get it. Just leave those of us who like making money alone hourly pay is going to be like a waitress below minimum with the exception you won't get the tips.
Sep 25, 2015 3:48pm

Ronald Charles
Don,t set trolley brake know a driver set trolley brake talked to his friend someone came in asked who drove blue Martin guy said me feller told him better go get it out of river rolled across U.S. 23 in Floyd county crossed 4 lanes of traffic never hit no one nosed into river never turned over
Sep 24, 2015 6:27pm

Kevin Hunter
Yep happens all the time. and there is no "park" when it's a manual transmission. had a switcher run himself over once doing that
Sep 24, 2015 3:45am

Dustin Mangum
Even if you forget to set brakes your not really positioned to get ran over unless the pin release is stuck.
Sep 24, 2015 3:04pm

Charles Elick Jr
Number 1 get off the phone, number 2 tractor in park ?????, 3 how does a trailer roll forward hooked to a tractor, definitely fishy circumstances here
Sep 24, 2015 6:05pm

Julie Morgan
If he was on the phone then he was distracted. I've done stupid things myself being on the phone which why I know when to be on it and when not.
Sep 24, 2015 4:55pm

Pat Offenberger
Look at the Swift driver recently awarded a couple of million dollars for getting his foot ran over by the trailer tires. He was pulling the slide release while another driver jerked the unit back and forth. If you're so stupid that you put your foot where it can get ran over, it should be your problem. Not your company. Such is the new breed in trucking. God help us all!
Sep 23, 2015 9:11pm

Chris Neal
I understand that. And proper trailer pretrip will show any brake issues including slack adjustment out to far. I've never had a trailer roll and never will using trolly brake
Sep 25, 2015 5:37am

Sue Domenico
It can happen. Driver at our company didnt pull brakes pulled 5th wheel truck released he had door locked it ended up in what was calked the pool. 2 tow trucks to remove it
Sep 26, 2015 2:01pm

Sean P. Brown
If you have to ask if a truck was put in park gear, you have no business posting on trucking site. Even an automatic transmission truck doesn't have a park gear. Guy was in a hurry and blew it. I have done it myself. Thankfully, on flat ground.
Sep 25, 2015 1:11am

Susan Swanson Smolen
It boils down to the family looking for a payday.. The bread winner is now deceased.. You don't put a truck in park.. If he was on his phone when all this happened then chances are he was distracted & it cost him his life..
Sep 24, 2015 10:10pm

Ck Newberry
Been driving for a long time,and yes I have for got to set brakes once or twice,I've never sat my butt in one of these automatic trucks,do they not have a park or are they like some of the fire trucks with just a push button D N R,like I said never been in one,always have a shifter in my hand.. Just wondering
Sep 26, 2015 11:13am

Penelope Townsend
We just loaded today at a place that makes you chock the wheels since someone got injured cause driver forgot to pull brakes
Sep 25, 2015 11:01pm

Ronald Charles
Marion's are tough trks or this one was stayed on it,s feet the whole time this was back when coal was big when owner got there they hooked 2 wreckers to it pulled it back up to highway stayed on it,s wheels the whole time done a little work to under carriage sent down the road to work
Sep 24, 2015 10:50pm

Clint Walker
I've seen it happen at truck stops, wharehouses, Walmart parking lots and even did it once in my own driveway.
Sep 25, 2015 9:21am

John Spencer
Never forgot to do it. Usually Professionals don't forget to do something as easy as setting the parking brake.
Sep 26, 2015 6:45am

Mark A Fitez
And the other thing is have you seen the junk trucks that those guys drive in and out of the ports and rail yards even if he had set his brakes he may not even have any
Sep 25, 2015 5:53am

Kenny G Simms
Yea bad way to go out,he probably set trolly valve and it slowly released on its on, I drivers do it all the time,but I think the family pretty much got the answer they are looking for just from what I have read
Sep 25, 2015 12:30pm

Jim Rigney
It's those pos auto shift Transmissions. They should not be in semis. This is just the beginning
Sep 25, 2015 10:59am

Fred Rodriguez
I forgot once when I was just starting. Didn't put my parking brakes on. Truck rolled just a bit, and jumped and pulled those buttons
Oct 20, 2015 11:27am