Unlike the heavy national media coverage of the 1-10 freeway shootings that have gripped Arizona motorists in an on-going state of fear, a similar scenario has also been occurring in southern Michigan but authorities have released little details until now. This week, the Calhoun County Sheriff’s Office released the recordings of a number of 911 calls related to incidents that have occurred on the I-69 and I-94 in recent months. One of those calls was regarding a truck driver who nearly got shot in the head. (watch the truck driver tell his story here) 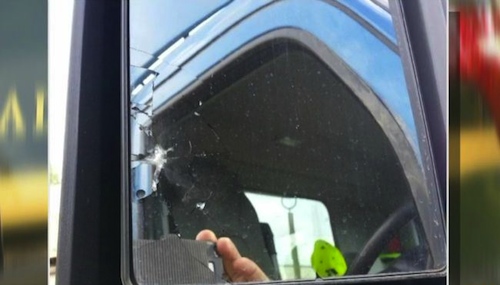 “I believe one of my semi-trucks was shot at on the I-94/I-69. He said there wasn’t no one around him and he’s checking out an air issue and he just heard a bang.” The caller was the employer of truck driver, Ubaldo Ruiz. On September 3, Ruiz had been driving his semi-truck along I-69 when he pulled over at exit 42 to deal with a mechanical issue he was having.  “All I heard was a whistle and that was it. I didn’t hear like a gunshot or anything,” Ruiz told local news media on Wednesday. “It’s like pretty much a head shot if it was over another foot or two,” Ruiz said. He explained that his first instinct was to immediately drive away from the area and have his boss call 911. The Calhoun County Sheriff’s Office investigated the incident and confirmed it was indeed a bullet that nearly hit the truck driver’s head as he was climbing into the cab and instead hit the driver’s side mirror. 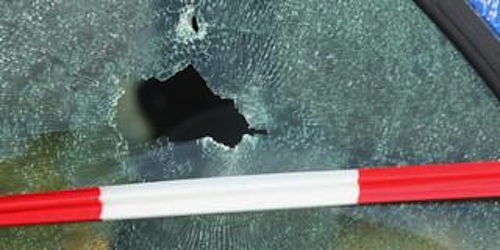 Just two days earlier on September 1, Calhoun County dispatchers had received an eerily similar call from a man on his cellphone who said his back window had just been hit:

“It was a loud sound, then my glass broke and flew all over,” the caller said.

“Did you happen to notice anything in the area when you went by?” Like anything off to the side of the road or anything?” asked the dispatcher.

“Nope, there’s nothing and there wasn’t like a car next to me or nothing,” the caller replied.

In fact, there have been nearly 20 similar reports of shots fired or damage to vehicles occurring on the I-94 and I-69 from roughly the end of July to early September. However, only three of the Calhoun County incidents, including the semi-truck driver, have been confirmed as gunfire. But all of the reported incidents have occurred in a small stretch of the highways in Calhoun and Branch counties during the afternoon and evening hours.

Calhoun County Sheriffs and the Michigan State Police have been investigating the shooting and say that although they've received tips on possible persons of interest, all of those have been cleared. So basically Michigan is left as stumped as Arizona and neither state seems to have any real suspects at this time. While its been at least a few weeks since any new incidents have been reported in Calhoun County, it doesn’t ease the mind of the truck driver who heard that bullet whiz by his head.

“I think I would feel better if they caught somebody,” Ruiz said.

Calhoun County authorities have assured that increased patrols are still in effect and ask anyone with information related to the shootings to call 269.781.9700.

Richard Meek
Paul Werly you may not want to visit Michigan until they catch this guy
Sep 20, 2015 1:34pm

Paul Werly
The 94/69 split is by my family and it's been going on for a couple months now. They are having problems finding the person responsible
Sep 20, 2015 1:40pm

Jason Stearns
I go to michigan a couple times a week. No issues..hardly see any cops of any kind and nobody there seems to be talking about it.
Sep 20, 2015 5:16pm

Cody Cruttenden
No body is talking about it cause the police don't tell anything about it not many people know what's going on and the people that do know have very little information I drive the area that it is happening in almost daily and yet been shot at but it doesn't mean he isn't out there targeting people, it is still an issue and the police presence has been greater in the areas of shootings just can't keep someone there at all times, today even I seen police out in fields and a chopper flying around the area as if that's what they were searching for
Sep 21, 2015 5:37pm

Jason Stearns
Well as i said above...I go that way on a regular basis as well as the 131 off of the 94...also take 96 and 196 on a regular and very rarely do I ever see any law enforcement. All I see is 4 wheelers whizzing by and the local trucks doing the same...the majority of them. The company I pull for is up by GR and I am up and down the 69/94/131/96/196 a lot while traveling between Mi to Fl round trip and Mi to Tx round trip and if the police presence was as great as you say then there wouldn't be the vast number of people speeding and driving as recklessly as they do. And yes that includes the local trucks and the multi axle trucks that are going as fast as the cars or faster. I just drove through there on Thursday and again on Friday. But cody I'm gonna have to call bs on your story because you can't possibly be driving it daily while supposedly living in S.C. lol my truck isn't governed and I wouldn't be able to drive through daily. You'd actually have to live in Mi but you don't
Sep 21, 2015 7:29pm

Brian Gosvener
The purpose of this group is for OTR truckers to get together and discuss topics concerning the industry. The hope is that drivers can share vital information like construction. . Traffic.. wrecks.. weather. . Scales. .. law changes and more. In order for this group to be successful we ask ***ALL MEMBERS*** to add all drivers they know. Knowledge is power and together we have unlimited knowledge. https://www.facebook.com/groups/1459200271055339/
Sep 18, 2015 7:35pm