Yet again, a truck driver failing to slow down in a construction zone has led to a fatal crash causing the death of a motorist and likely the end of his job. It’s the similar set of circumstances cited in the Tracey Morgan crash, the tragic accident that killed five Georgia nursing students and the Indiana crash that killed five motorists in July. This time, the tragic accident occurred in Michigan on eastbound I-94 near Exit 60 at Paw Paw. According to the Michigan state police, the incident happened at about 2:15 p.m. Thursday, when a construction project east of Exit 60 slowed highway traffic to a crawl and an approaching truck driver failed to slowdown. 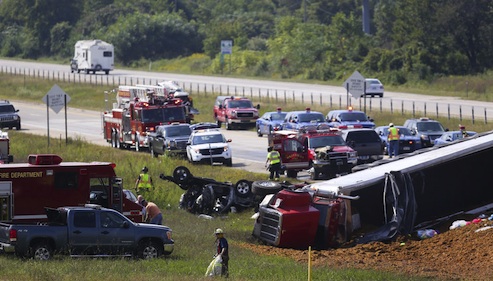 Police say the crash happened when a semi-truck approached the construction zone and failed to slow down despite the backed up traffic. Instead, he rear-ended a Toyota SUV instantly killing a 72-year-old Illinois man. The semi driver, whose name and age has not yet been released, was hauling apple pulp, when he rear-ended the Toyota SUV driven and killed the driver, whose name has also not yet been released. According to Michigan State Police Lt. Dale Hinz, the initial hit caused a chain reaction crash, which involved two semi-trucks and five passenger vehicles in total. Four vehicle occupants were transported to area hospitals, with two being critically injured and seven other motorists were treated for minor injuries at the scene. 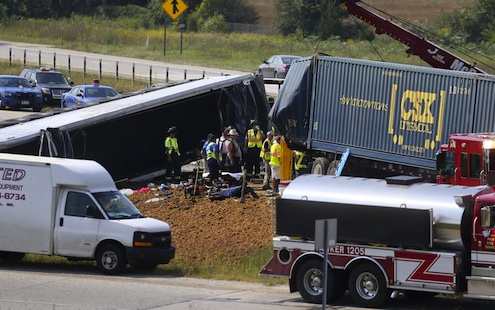 Police were forced to shut down the entire eastbound I-94 at Exit 60, causing even more traffic back up in the already congested construction area. Traffic was re-routed for three hours following the crash as emergency crews and investigators attended to the grisly scene. At least one victim had to be extracted from their vehicle. It was after 5 p.m. on Thursday evening when the highway finally reopened. According to a preliminary report, the truck driver has been found at fault for failing to slowdown in the congested highway construction zone. "The preliminary investigation shows that the inattentive semi driver failed to react to the slowed traffic, causing the initial collision. The MSP Fifth District Traffic Crash Reconstructionist is currently investigating to determine the exact sequence of events following the initial collision,” the report said. 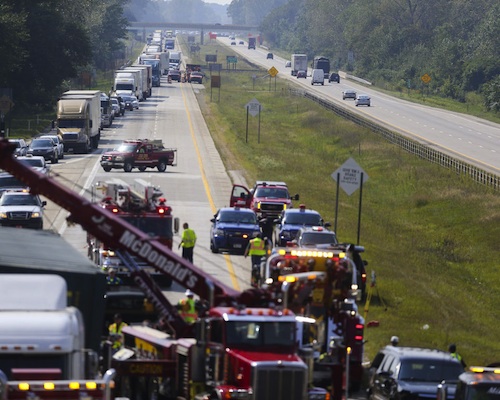 Hinz also confirmed that they are investigating why the truck driver was not paying attention to the road at the time of the crash. "90% of traffic crashes are a result of driver behavior. The takeaway from today's crash is you have to pay attention, you have to be ready especially during the summer months for lane closures and backups...unfortunately in this case we can see the results of when driver inattention comes into play," said Hinz.

Justin Hoke
Butthurt about PHONES being the root cause of MOST accidents now? You're probably the most guilty!
Sep 06, 2015 4:04pm

Timothy Begle
Dweebs and their simpleton grade school psychology. Here’s a help that I know you haven’t the ability understand. There’s ALWAYS been mindless unexplainable truck crashes. Well unexplainable until they were investigated and the findings published. However, now days we ALL try every driver on social media. Standard mindless yammering is blame the cell phone. Yet all around us we see butter nut drivers speeding into constructions. Speeding and tailgating. All driving mindlessly like zombies. They have speed limiters. GPS tracking. Warning this and warning that. All kinds of junk in their trucks as if we can take the driver out of the equation. And you a great thinker? Say the same thing as every mindless welfare queen does. Blame the phone. Well smart guy, WHAT THE HECK DID WE BLAME IT ALL ON BEFORE CELL PHONES? Is that so hard to understand? Or Are you to busy driving mindless through constructions zones to notice the world around you?
Sep 06, 2015 4:28pm

Jeni Heneghan
It was probably his dispatcher on the Qualcomm squawking at him at the worst possible time.
Sep 06, 2015 11:08pm

Timothy Begle
Dispatcher: Why aren't you replying to my Qualcomm messages??!!! Driver: Because all the messages you have been sending me caused me to pay attention to your demands to read them. I've been a little busy. There's several cars under my truck right now and the truck's wiring is shorting out. Dispatcher: DOES THIS MEAN YOU'RE DOING TO BE DELIEVERING LATE AGAIN!? I'm contacting your driver supervisor, he will deal with you. A few minutes go by. Driver: You may want to send a few lawyers up here. We’re going to need them. No reply from Dispatcher: He’s to busy deleting message from their system and changing the GPS records. Later he will stop past the club and have a few cold drinks and talk to others about how unreliable and slow truck drivers are.
Sep 07, 2015 5:32am

Mike Browning
with the new hours of service companies are having to buy more trucks and hire more drivers...... therefore with this increase of traffic, we will all see an increase of crash's,,,,,, it's simple math percentages. With the increase of devices in the truck, phone,gps,internet, ect. ect. distractions are going to effect drivers in all vehicles, not just trucks, Unfortunatly, it's the trucks that cause the most damage. and get the most attention in the press. There are 100 car crashes for every truck crash, but you don't hear about them on a national scale?
Sep 05, 2015 2:51am

Jason Stearns
I drive to Michigan on a weekly basis and I have to say this...the local drivers never obey the 60mph speed limit and Michigans split speed limit doesn't do any good or matter for the most part. I've come up on local trucks going under the speed limit that will speed up when I go to pass them. Luckily I'm not in a governed truck and i get past them just to have them go flying by me or have another one do so. It's a regular sight to see a multi axled rig doing 70 or so down the highways as well as speeding on the 2 lanes. The 4 wheelers are even worse. Hell they don't even slow down at all for construction zones in Michigan unless they see a trooper. But then again they just speed right back up as soon as they get 50 yards pasr the trooper. They do that in Indiana and Illinois too. Not to mention ALL of the traffic that is speeding at 60+ mph in the 45 and 55 zones on I-80 in Indiana and Illinois.
Sep 06, 2015 12:50pm

Ruben Luna
It's funny how they say it the trucker every day I go out there a car gets in front me when I am fully loaded and then when they see some thing going on the other side of the free way they stop to look at it
Sep 04, 2015 7:19pm

Robert McDaniel
So dam sad.its clear as hell he did not have his dam eyes on the road.you see it every day the truck that do not slow down for road work or right on the bump of someone trying to do the speed limit.
Sep 04, 2015 6:38pm

Ripudaman Singh Sohi
If shipper load on time and receiving unload on time , brokers don't rush drivers to get on appointment time, even drivers get on time loading and unloading takes hours delay . I think this a main cause of accidents. Some drivers they don't pay attention on signs and some of them don't know how to read in English.
Sep 06, 2015 8:19am

Josh Cronch
Yet another example of how speed limiters will not improve safety...
Sep 06, 2015 7:03am

Kenny Henke
Phone law not hardly being enforced more drivers are driving with phone to ear than ever before had another of the company drivers that I drive for pass me with phone plugged to his ear and never missed a lick .
Sep 04, 2015 6:19pm

Kirk Righetti
as tragic as this is, I am sure that this will be blamed on the whole industry where I am sure more regulations to sufficate the industry. Instead of going after the whole industry maybe just prosecute this driver...being that not all drivers are reckless.
Sep 05, 2015 2:53pm

James R Maxwell
My thoughts exactly. You see certain driving habits by the way one is paid.
Sep 06, 2015 6:55am

Brandon Ackerman
They want us to slow down and take a pay cut but the company s don't want to pay 45cpm with a 13 hour plus day for most. With average moving speed of 30 to 45mph due to construction, curves, Red lights, trafic, and other non paid stuff. This kinda rushing thing will continue to until we are paid hourly or subsidized for lost wages
Sep 06, 2015 7:04am

Pat Offenberger
Check the load, stuff like that ain't on "slow" trucks, or trucks with E-logs. Apple pulp would be agricultural hauling.
Sep 06, 2015 12:12am

James R Maxwell
Wasn't addressing this truck. I was addressing Timothy comment about construction zones. This guy was probably paid by the load or tonnage and was in race to get the next load.
Sep 06, 2015 7:01am

Timothy Begle
Hell Max they all are racing now days. The pay isn't the issue the driver is an issue. So many drive like mindless zombies. They have no idea what is going on in front of them. They only look a few feet past their hood and never read the road ahead. It’s gotta go gotta go as they jump from lane to lane like animals instead of think reasoning humans. I’ve said it before and I will say it again. I swear many are possessed or under the possession of demons. There’s nobody home in their head but a spirit that is out to kill and maim. We got Spirit Fill Churches. We got Spirit Filled people. We have people who’s minds were taken over when they tripped out on drugs. We got schools and colleges leading kids to open their minds to anything and let it in. We got people seeing visions. We got people who claim they see the future and talk to dead people and dead animals. We have a world that has flipped off God, flipped off common sense, flipped off all authority. Just what the heck do people expect when you have a world filled with self-absorbed people behind the wheel of a car, truck or whatever and running a country. We have been given over. In other countries they have been like this for years. Roads are killing fields. America has important those people under the guise of being open-minded to illegal immigration. Plus, we have turned into those people from other countries as we keep going backwards as a mindless population. Only thing different is we still dress a little better and the bones in our noses, ears, face and dozens of other spots on our bodies are just more civilized looking. Plus, we beat on better looking drums with better looking sticks instead of dead-men’s bones.
Sep 06, 2015 7:46am

Justin Hoke
If he hadn't had his phone plugged in his ass, it may not have happened. I guess those super trucker bad girls aren't invincible afterall! Hopefully the persons death haunts this driver to the point of suicide!
Sep 06, 2015 4:03pm