A truck driver became more like the villain of an action movie when he led police on a 90-mile chase in Atlanta, late Monday evening. According to investigators, 26-year-old Bernard Mageto Monyoncho of Robbinsdale, Minnesota, was drunk as he drove his tractor-trailer erratically and led multiple police agencies on the dangerous chase that began in the Macon area and ended near Atlantic Station. 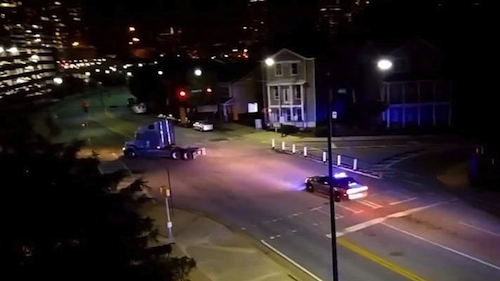 The incident started at about 11:15pm Monday evening when Bibb sheriff’s deputies got word that a truck cab without a trailer attached was driving dangerously and without headlights while heading north on Interstate 475 near Zebulon Road. The truck driver also wasn’t signaling as he continued to cut across lanes of traffic, without any regard for the safety of others. According to the sheriff’s incident report, deputies from Bibb County began their attempts to stop the tractor-trailer, but instead the driver looked like he was attempting to hit other vehicles, including the patrol cars.

As the chase continued from Macon towards downtown Atlanta, Monyoncho started throwing items out the window at Bibb County sheriff’s deputies. He also slammed on his brakes several times to try to disable the nearing Bibb patrol vehicle. Monroe County deputies soon joined the chase at Rumble Road on I-75 and then at mile marker 191 a Monroe County deputy pulled beside the truck and shot out the two rear tires. However that didn’t stop the truck driver and he continued to drive on his rims. “He was driving on his rims. The tires were gone,” said Allison Selman-Willis, public information officer for the Monroe County Sheriff’s Office.

When he reached mile marker 206, another deputy shot out the tractor-trailer’s front tire but he still kept going. Deputies continued their chase to Henry County, where police put out “stop sticks” in an attempt to disable the vehicle and still he kept going. Finally, a construction zone at mile marker 210 forced the truck driver to stop. It was after 1 a.m., when Monyoncho was arrested in the 2200 block of 16th Street in Atlanta. The arresting officers immediately detected the smell of alcohol in the vehicle and he was taken to Monroe County to face multiple charges including aggravated assault with a motor vehicle, felony fleeing, open container and DUI, as well as littering.

The long pursuit often reach very low speeds and at one point an officer from the Motor Carrier Compliance Division of the Georgia Department of Public Safety had joined the trail and when they entered Atlanta, a Georgia state trooper got involved as well.

Timothy Begle
He wasn't one of us. He's part of the new breed that the trucking companies hire to fill seats. They work cheap and only need either money for drugs and booze.
Sep 02, 2015 6:20pm

Kelly Kirkpatrick Sr.
Watch someone will riot over this . for wrongfully Accused
Sep 04, 2015 3:23am

Doug Wellington
At what point should they have considered Him a threat to sociade ? & just shot him ? I'm thinking mile two or three . That's the kind of asshole that gives us all a bad name !
Sep 03, 2015 12:33am