Another trucking tragedy occurred Thursday evening, when a runaway tractor-trailer crashed into a pick-up truck killing a mother and injuring three family members that were riding with her. The incident occurred around 8:30 p.m. on Highway 41 in Emerson, Atlanta and according to City Police Chief, Stan Bradley, the truck driver had parked in the driveway of Zep Inc. to do a safety inspection on his big rig, which was hauling corrosive cleaning chemicals. Although he was not in the truck at the time, his fatal mistake was forgetting to put the parking brake on and the vehicle rolled downhill into the northbound lane of the highway. 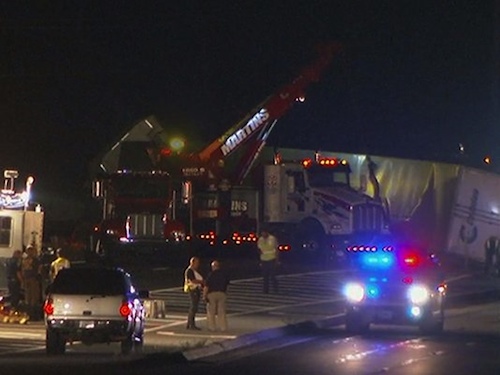 Bradley reported that the truck driver was unable to stop the semi truck before it crashed into the on-coming pick-up truck, a Toyota Tundra carrying a man, a woman and their two young children. The father had been driving and was taken to hospital non-life-threatening injuries, but tragically the mother who had been riding in the front passenger seat was killed immediately on impact. Their two children, (an infant and a toddler), had been riding in the Toyota as well and were taken to Children's Healthcare of Atlanta in serious but stable condition. It took two hours for emergency crews to free the father and children from the truck, making the experience even more horrific for the survivors. Police said that because the tractor-trailer was carrying hazardous materials, it slowed down the process of removing it. 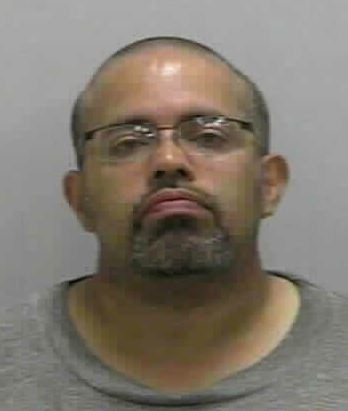 The truck driver is 52 year-old Ivan Delgado; a contract driver from New York who was arrested at the scene after police performed a field sobriety test and determined him to be under the influence of narcotics. Delgado was immediately charged with DUI and later charged with First Degree Vehicular Homicide, Involuntary Manslaughter, Reckless Conduct and Failure to Exercise Due Care.

“The brakes, the parking brake on the vehicle was either not set or failed causing the vehicle to become unsecured and rolled down the hill, striking the red truck as it was traveling northbound on Highway 41,” said Chief Bradley.

The father driving the Toyota pick-up told investigators he had been driving with his wife and children home to Cartersville, and he did not even see the rolling semi-truck until it hit his vehicle. As of early Friday, the two young children remained in serious condition and while the father’s condition was not known, he is expected to survive.

Terry Brown
Terrible tragedy. All the more reason four wheelers need to watch more attentively the road and surroundings. The 4 wheeler was not at fault the truck driver was.
Aug 14, 2015 12:27pm

Daniel Kettlewell
Sounds almost like you are putting part of the blame on the four wheeler.........The four wheeler is not at fault in any way shape or form in this terrible accident. The truck driver is totally at fault in this case.......if the dumbass hadn't been under the influence this wouldn't have happened.
Aug 14, 2015 5:58pm

Terry Brown
The only thing i was trying to convey was about being aware of the surroundings whenever anyone was driving. I expressed that due to the four wheeler stating he was not aware of the truck until it struck them. Sorry for making it sound as though i was trying to place blame on the 4 wheeler.
Aug 14, 2015 6:34pm

Steven Buckley
Sadly, people do dumb things. Once in awhile the consequences are serious...
Aug 16, 2015 3:15pm

Terry Perrott
It also goes the same for the : FOUR WHEELERS" I drove OVER THE ROAD and seen some Stupid shit that the Four Wheelers do...Like one woman put makeup on a book propped up in the steering wheel and eating a bowl of fruit... And Steering with her knees. ...Thats not ssfe ...This is just a very small piece of the pie that Im Sharing. ......
Aug 15, 2015 8:11pm

Mike Wilhelm Sr
I never could understand how we categorize truck drivers as professionals but cars just drivers don't both have license and are they not professionals if so why do they have to have a license. Never understood that
Aug 16, 2015 4:27am

Marcin Wiecek
Besides the skills, we are held to a higher standard. If something happens on the road, it will , most likeley always be a truck drivers fault. We are required to make the right decision where regular drivers would be given a pass.
Aug 16, 2015 4:18pm

Mike Wilhelm Sr
And I see a lot paying for theirs to drive a truck no different anymore. Maybe years ago but know days some of these truck drivers I wouldn't let drive my bicycle. They go to these schools and pay for their license and I think it is crazy. It's not about knowing anymore it's about the old mighty dollar I had one that had license and said he needed training on stick when I finally had enough I told the boss he couldn't and never would he was a moron. But how did he get license in a school crazy.
Aug 17, 2015 12:20am

Mike Wilhelm Sr
So truck drivers are know no different than cars in my book they will let any idiot behind the wheel if you have the money you don't have to know how to drive it is a shame and I have personally seen this not once but twice so it is not just a fluke.
Aug 17, 2015 12:25am