Just when you think you’ve heard everything that could possible go wrong on the road, a truck driver took a plunge into the Manatee River – tractor, trailer and all. The incident happened on Saturday evening in Manatee County, Florida where the truck driver had been heading northbound on I-75 and the slick roads caused him to lose control. The semi-truck veered off course then smashed through a concrete barrier and went sailing off the Jeff Young Bridge at Mile Marker 224 and into the Manatee River. 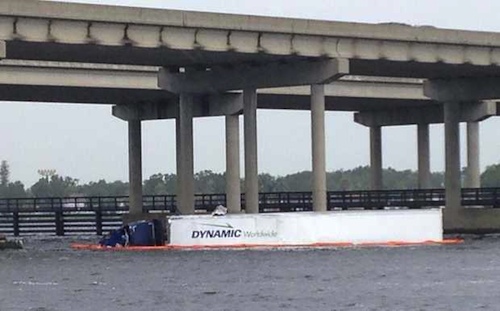 Ellenton resident Robby Smith had been chilling with his friends at a nearby riverfront property during the thunderstorm and they saw the whole thing happen first hand. They were stunned as they watched the truck slam through the barrier and splash into the river and according to Smith the truck had also caught on fire before plunging off the bridge - so that dive into the water might have actually saved the truck driver’s life. “It was a big explosion. A big old black cloud went up in the air,” said Smith. The friends quickly got over their own shock and sprung into action to rescue the driver. Luckily,  they had a boat on hand and immediately hopped in it racing over to the submerged semi. As they neared the site they could see the truck was crushed, sinking and leaking diesel fluid. Smith feared the worst and wasn’t even sure if they would find the truck driver alive. “Everything was going through my mind like this is going to be bad right here. We were like ‘hey, is anybody in there?’ And he was like, ‘yeah, I’m OK,” Smith said. 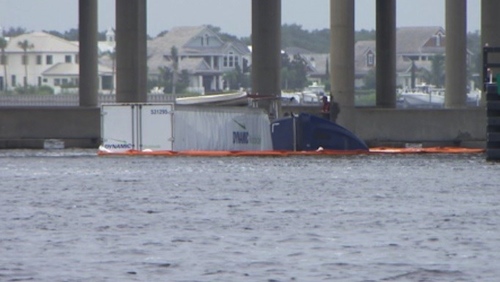 Fortunately the 29-year-old truck driver, Timothy Dale of New Jersey, was still alive but the cab was quickly filling up with water and he was trapped behind the wheel. "The water was about up to his chest. He was still in his seat belt and everything. And he was like, 'I can't swim.' So, he wasn't getting out of that truck. He was happy to see us," Smith continued. The Good Samaritans raced against the deadly rising water and managed to pull Dale out of the cab and safely into their boat. “The whole time on the way back in the boat he was like 'Oh, thank you man! I’m so glad to see y’all,” Smith said. They then realized Dale was soaked with diesel fuel and so the impromptu rescue team did their best to wash it off him until the paramedics arrived and were able to take over.

The Florida Highway Patrol confirmed that Dale survived the incident with only a few minor injuries and although alcohol was ruled out as a factor in the crash, the truck driver will be cited for careless driving. The truck’s cab was completely crushed and crews are still working to pull the entire vehicle out of the Manatee River.

Mark Nichols
Kate Campbell a boater saw the accident. He pulled the driver out with mostly scratches and bruises.
Aug 03, 2015 8:19pm