A tragic chain of events ended up killing a truck driver and seriously injuring three firefighters Sunday on Texas 183. It began around 3am when police and firefighters were on the scene responding to a major accident involving a GMC pick-up truck in the eastbound lanes of Texas 183 near Irving.

According to Irving police officer, Stephen Burres, the GMC driver had fled the scene on foot after abandoning his vehicle and although officers eventually apprehended him down the road and arrested him on suspicion of driving while intoxicated, the events did not end there. An aerial ladder fire truck had been at the scene helping to block traffic while a tow truck removed the wrecked pick-up. Then, an 18-wheeler semi-truck came along the eastbound lane driving at highway speed and smashed right into the back of the fire truck. The collision sent the fire truck spinning 180 degrees and caused it to roll over on the passenger side. Assistant Fire Chief Rusty Wilson reported that two firefighters had been sitting on the front bumper and a third was standing in front of them at the time of the collision. The cab of the semi-truck burst into flames shortly after impact and the truck driver, 55 year-old Ilian Lalev, was pronounced dead at the scene. While the incident is still being investigated, authorities believe the truck driver may have suffered some type of medical condition, which prevented him from being able to stop. “We don’t know if the driver managed to touch the brakes or not. We don’t know if the driver fell asleep or had a medical condition,” said officer Burres. 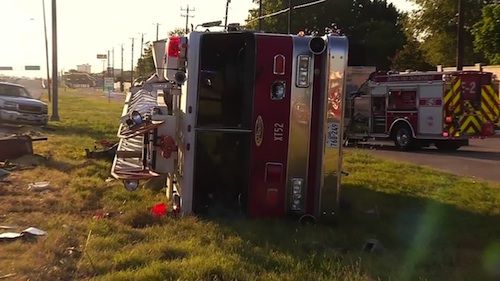 Miraculously, the firefighters survived the big truck’s blow but all were taken to hospital with injuries. One firefighter suffered a concussion and the two other firefighters had cuts and bruises. “The two on the front bumper were thrown off toward the service road,” Wilson said. “The third firefighter doesn’t remember much of what happened to him.” A patrol car had also been at the scene working the fatal wreck and was hit by yet another vehicle. Fortunately, the officer was not in the vehicle at the time but the patrol car was badly damaged and that second motorist was also arrested on suspicion of driving while intoxicated. 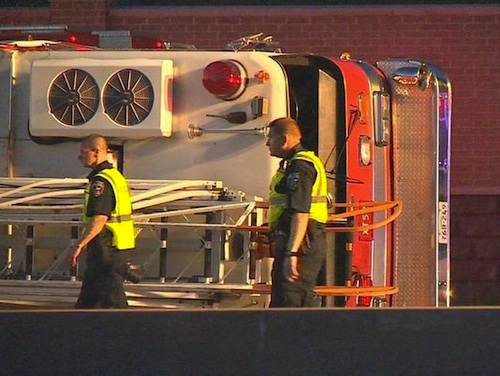 Emergency crews spent the rest of Sunday morning removing the 18-wheeler and the fire truck off the highway. Other crews were also called in to remove fuel and transmission fluid from the eastbound lanes of Texas 183. The eastbound lanes and the service road of Texas 183 between Belt Line and Story roads were closed for the cleanup but re-opened Monday.

Kevin Fox
And the reason that they always blame a professional driver is cause they can always find something wrong with our trucks or log book but put a retired person in a big ass camper pulling a vehicle and the don't need no license to do it . If u can take it off on your taxes u should CROSS THE FUCKING SCALES AND FOLLOW THE SAME RULES AS US .
Jul 29, 2015 12:04am

Renee Bragg
A firetruck is on the scene of an accident and the truck rams into it. Noone thinks it's the drivers fault? What did I miss?
Jul 29, 2015 5:54am

Brad Strain
How about instead of placing blame on the truck driver or assuming it was anything other then a medical condition until it's proven fact. We focus on the first possibly drunk driver that started the whole series of events.
Jul 28, 2015 6:20pm

Joshua Smiley Contreras
This happened near where I live one of the firefighter said he doesn't remember hearing the semi braking at all
Jul 27, 2015 6:27pm

Robert Barnett
They have ran out so many of the multi generation drivers that have grown up with an old school driver with the B S regulations. Now there is such a shortage they will take any warm body to fill the seat. It's very sad. Btw, to hell with "politically correct" have a backbone.
Jul 27, 2015 4:30pm

John Highley
You nailed it Alan Hale. Nobody wants to talk about it because it's not "politically correct" but it's a fact.
Jul 27, 2015 4:11pm