Are “Safety Trucks” Really Going to Save the Highways?


In June, Samsung introduced its “Safety Truck” to the world and the transparent truck concept with its slick looking LCD screen immediately went viral. Poised to be the best potential lifesaver of the future, Samsung put its electronic mastery to work and found a way to make the relatively simple “Safety Truck” concept into a real life thing. By sticking a camera on the front of a lorry and then hooking it up to a screen on the back, the truck essentially becomes ‘transparent’, allowing motorists to see the road ahead in order pass big trucks much more safely. 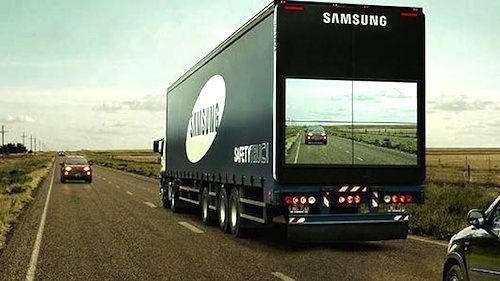 But the genius idea that got everyone excited and many truck drivers on board during its last month debut, is now being scrutinized for the possible holes in the reality of its ability to make our highways safer. The first logical question that many want to know is why with today’s technology, hasn’t this been done before?The fact is that in 2009, Moscow based company, Art Lebdevev, introduced the exact same concept in, “Transparentius,” a truck designed to function just like Samsung’s Safety Truck. However, the potential problems became evident immediately around the uncertainty as to whether or not the technology would work in low light environments, in adverse weather conditions or whether it could cope with sun glare etc.

While Samsung has since stepped in with its experience with outdoor technology (such as its infamous screens in Times Square) and stepped up the game with the “Safety Truck” having already passed testing in Argentina, the specifics of how well it really works have yet to be released. But even if the “Safety Truck” does end up being all that, some have raised another valid concern about economically viable it will be for the industry to invest in such technology. Especially considering whether or not the cost would balance out with the number of fatal collisions reduced by these trucks. While the camera would be a relatively cheap investment, installing the four required large displays on each truck would be a major investment for trucking companies, with no real financial benefit - as of yet. Would companies be forced to recoup the costs with advertising dollars? And that raises the question of whether these giant screens would actually be safer or simply more distracting to drivers? 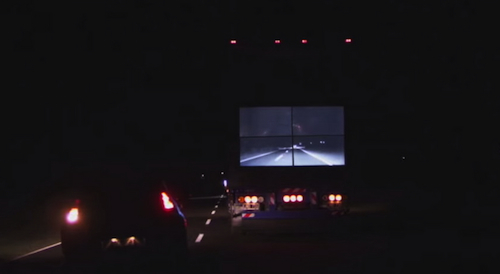 Of course another crucial concern that has been raised, is how accurately do these screen represent the actual distance of oncoming cars? How well would motorists be able to rely on the screens in order make their own accurate judgements of timing and speed? Some critics have also questioned whether certain drivers would only be encouraged to make even riskier attempts at passing large sized vehicle on the highways. Not to mention the question of whether the “Safety Truck” would even be really necessary on highways with multiple lanes.

So less than a month after the “Safety Truck” concept makes it widely applauded debut, critics are already driving it down and paving the way for the next, technological breakthrough - Vehicle-to-Vehicle (V2V) communication systems. Stay tuned…

Martin Webster
Wait till someone runs up the back of it because they "didn't realize there was a truck there" lol
Jul 06, 2015 6:54pm

Thomas Steensma
Twrrible idea, truckers already got enough shit to deal with, how bout they train them four wheelers to calm down and not be jackasses around big trucks
Jul 06, 2015 11:25pm

Jim Ragan
No people will still tailgate us drivers. This just gives them more of an excuse when they get into an accident dealing with truck drivers
Jul 08, 2015 9:16pm

Cliff Norris
Regardless there will always be dumbass drivers.
Jul 07, 2015 6:19pm

Samuel Byler
Its going to make things worst...until drivers take personal responsibility for their actions and make sure they do not make a move until everything is clear nothing will get better....I think speed limits for cars and trucks should b the same.....when u have speed limits for truck slower then cars it causes car drivers to hate the slow trucks and subconsciously as soon as they see a truck their first inclination is to pass.....this happened to me in MI the other week...I was slowing down for an ambulance coming towards me and a car behind me was traveling at a much higher speed than I was....and as I can only imagine...when they saw me probably pick up speed..and then suddenly realized what was going on...they lost control of their car and went head on into the ambulance.
Jul 09, 2015 4:38am

Jim Kratzer
Wonder what the screen will show when that June bug gets a bullseye on the camera lens......and will the four wheeler tailgating the truck flinch and run off the road?
Jul 08, 2015 5:50pm

Rick Mitchell
It will cause more headons because of the me first factor. No depth perception
Jul 06, 2015 8:59pm

David Wilmot
One of the things I have noticed in the 40+ years of driving, as cars have gotten 'safer' seatbelts, airbags, etc. Drivers have simply got dumber, less attentive, take more chances and are more aggressive.
Jul 09, 2015 8:46am

Troy Carnahan
Who's going to be liable when somebody steps out to pass and gets in a head on because they can't anticipate the oncoming traffics speed, or they can't see clearly because the screen or camera are dirty? Is the car still at fault? Or is this "safety" device going to cause the truck insurance to pay. That's been my question all along.
Jul 07, 2015 7:00am

Jason Stearns
Won't really work at all and most of all it'll just be another thing on our trucks that dot could and would ticket for...ie: something is broke,a flicker,not visible and so on. Plus them 4 wheelers already have enough distractions...why add an even bigger one? It would be a kind of target
Jul 07, 2015 11:08am

Paul Kirby
If the cars had a correct following distance there wouldnt be an issue !!! Or any motorist for that matter
Jul 08, 2015 8:41pm