A tanker truck driver tanker was carrying 8,000 gallons of ethanol near Columbus, Ohio Wednesday morning when something caused the vehicle to crash and overturn, then slide along the I-270 before it erupted into flames under the eastbound I-70 bridge. Although it has yet to be determined what caused the tanker to crash at around 6 a.m., officials say that the driver is being cited with failure to control and with transporting a hazardous load in city limits. 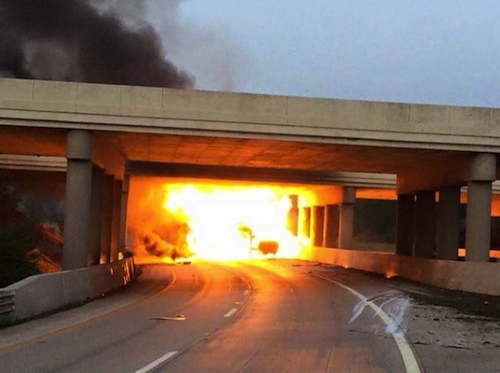 The good news is that the driver, 50-year-old Charles Lackings (employed by HOC Transport Company), was able to escape the deadly inferno and has already been released from hospital suffering only minor injuries. But his clean accident history has certainly been muddied by today’s incident, especially with the severe damage it caused to the I-70 eastbound bridge. According to the district deputy fire chief, the damage to the steel and concrete is so significant that he expects the bridge to be closed for several weeks. Fire battalion chief, Tracy Smith, explains that the ethanol caused the blaze to be so bad that the crews just had to let it go. “We had to let it burn,” she said. “That product doesn’t mix with water, so it burned.”

Fire crews were able to safely extinguish the flames about an hour after the crash, and I-70 westbound lanes have since been reopened Wednesday afternoon. Officials say they will also create a crossover lane so that eastbound traffic will be able to resume by Friday afternoon. However, the ODOT has estimated the crash has already caused around $1 million in damages to the surrounding bridges and roads. Fire crews had to bring massive amounts of water to the scene, along with multiple departments bringing foam to help extinguish the blaze and then continuing to spray the hot metal until it stops igniting. A cleanup crew from the tanker truck company, Columbus HAZMAT crews, and the EPA were also called to the scene to clean up the ethanol. 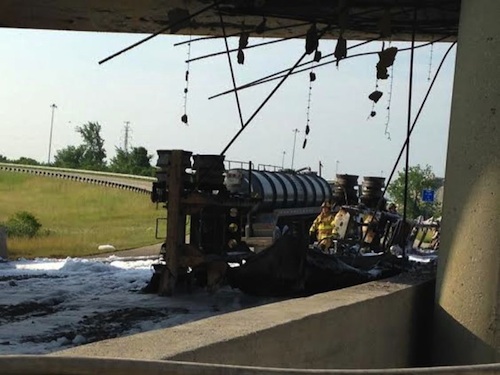 Adding to the costs, are the estimated repairs to parts of the I-70 bridge and pavement on the I-270 ramp. The repair project is expected to take a month to complete and transportation officials are already working with the governor to allocate emergency state funding for the costly repairs. Jerry Wray of the Ohio Department of Transportation says they have already scheduled teams to be on location at the bridge around the clock to check the integrity of the concrete. “They will be critical. That group will be together, working shifts 24 hours a day, seven days a week…making decisions quickly, and on the spot,” Wray said.

Dan Ashby
I was in the area when it happened, I don't know the specifics of how it happened, but in Columbus drivers are following to closely, big trucks, 4-wheelers a like.
Jul 03, 2015 12:53pm

Stephen J Penix
That's my thoughts exactly!! 270 is the bypass loop and hazmat route wow what they won't write a ticket for SMH us truck drivers don't have a chance
Jul 03, 2015 10:35pm

Jon Mc
We have a dangerous job and 4 wheelers make it harder jumping in front of us slamming on brakes. To many things to list
Jul 03, 2015 6:20am

Chris Richerson
I remember when it happened in Birmingham AL
Jul 03, 2015 8:29am

David Hanifan
Did you people saying prayers for the victims even read the story??? There were no victims! Even the driver made it out.
Jul 04, 2015 11:11am