A truck driver faces multiple charges after causing a chain reaction crash involving 12 vehicles around 4 a.m., Friday morning. Mark Tipton of Crossville, Tenn., had been driving a 2016 Freightliner in the northbound lanes of I-55, just south of First Avenue in Forest View, when he failed to slow down in a construction zone and caused the 12-car pile-up, which sent at least five people to hospital and injured nine others. According to the police report, Tipton told the responding officers that he had fallen asleep while driving and did not make any attempt to stop. 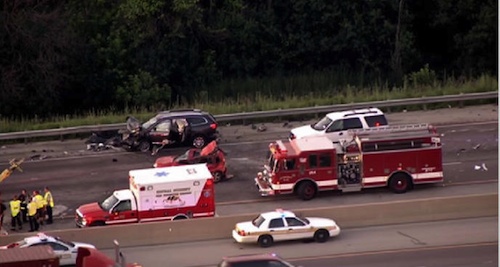 Fortunately, Tipton came out of the incident relatively unharmed and had declined medical treatment at the scene. But the bad news for the truck driver came when he was arrested at the scene and charged with six violations that include driving while fatigued (which is a Class 4 felony), driving for more than 14 consecutive hours, false report of duty status, brake out of adjustment, automatic slack adjusters required and failure to reduce speed to avoid a crash. According to the prosecutors, “Tipton picked up a load and realized he might not make his destination, so he "kept his foot down.”

The details of Tipton’s employment situation and delivery details have yet to be released but the prosecutors may be blaming the truck driver for acting in a negligent manner when its often the companies pressuring their drivers to push their hours and to even falsify logs. In fact, since NBC’s highly publicized investigation of "truck drivers forced to falsify logs", more and more truck drivers have come forward with similar stories. 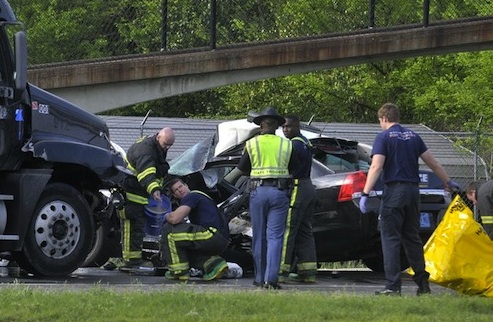 The family of a Montgomery police officer killed by a fatigued truck driver last April has certainly recognized the fatigued driving factor in the wrongful death lawsuit they recently filed. The lawsuit names both the trucking company TUI Express Inc. and truck driver Yasin Steven-Conley James as defendants, and alleges that both parties were responsible for Officer David Lee Colley's death:

"The truck driver was cited for numerous violations of Federal Motor Carrier Safety Act regulations. Those violations included responsibilities he has as a driver on the road and those his trucking company has to maintain a safe vehicle. His logbooks revealed that he was attempting to conceal his duty status and hours of service. The hours-of-service rules are in place to prevent fatigued driving. A fatigued truck driver is not as capable of reacting to the environment around him, especially emergency situations like the one we have in this case. Fatigued driving is a big problem and results in thousands of crashes each year. Mr. James was faced with a police officer who was responding to an emergency call. The accident could have been avoided with an alert and oriented truck driver appropriately responding to his environment. Unfortunately, he did not," said the lawsuit filed by the Beasley Allen Law Firm.

Clint Ladd
Hmmm.... I saw this story on the local news station in Kankakee, IL a lunch time, and at that time they were reporting that the investigation was still going on and that no charges were made yet.
Jun 22, 2015 8:52pm

Trucking Unlimited
He was charged and saw the judge on Sunday, then released on bail.
Jun 23, 2015 9:22am

Doc Gunderson
I have never had any job loss due to forced trucking. I'm the driver I choose when to roll and if a job tryed to fire me for not breaking my logs I would sue and have the entire government to back it up. . So driving out side logs is only drivers fault you have the power of choice . ..so choose wisely . ..it your life on the line...
Jun 22, 2015 2:48pm

Robert Todd DeGraaf
A fatigued driver does not mean he was fatigued from driving. Wasn't the Walmart truck driver that hit the comedian on a restart but he partied hard in his days off? He was tired just coming back on.
Jun 24, 2015 5:38pm

William Seifert
I've been driving for a little while.......over the years I've got in quite a few tug'o'wars over this issue. Brokers trying to push you,bosses,etc. Also their some drivers with BILLY BIG RIGGER SYNDROME. who are selfish idiots breaking laws.....not to mention some recent. arrivals from europe and else where who dont have a clue handcuffed to their truck.....BOTTOM LINE do whats right dont push it.....I tell brokers if they act stupid about this....THEY SHOULD OF PUT IT ON A HELICOPTER.....
Jun 24, 2015 9:58am

Nick Stewart
The driver needs to be responsible and follow the rules. As a driver myself I just told the owner of the company that the truck wasn't moving for 2 reasons... I was out of hours and it was a hazmat load which I am not authorized to haul. Be a professional driver or don't drive at all.
Jun 23, 2015 10:10am

William Brady
Ok here's the argument, how can you have false logs now days when the majority of industry is on elogs. The fatigue driving comes from having to races clock to somewhere that probably full from everybody else whose time is up. So now what? None of this is making sense.
Jun 23, 2015 8:19am

Randall L Stutler
Because a lot of small companies still use paper logs
Jun 23, 2015 8:50am

Doc Gunderson
I have heard of Elogs being altered by the company also. If true just to give drivers back some drive time I would bust that company .
Jun 23, 2015 10:39am

Jason Stearns
Companies on elogs get audited regularly. Changing someones elogs does show up in multiple forms and can't be hidden. The inspecting officer has multiple ways of seeing and getting info pertaining to altered elogs.
Jun 23, 2015 3:22pm

Bo Venable
If you look into the national crash statistics you will find its majority big companies... Most drivers running loose leaf logs sleep when they are tired and truck when they are awake
Jun 23, 2015 5:13pm

Wayne Doel
Drive illegal and get in a accident guess what the troopers are going to check? Your cell phone ping locations. If you don't really show pinging from same tower for 8-10 hours goodbye job,truck, and opens a whole lot of lawsuits cus your at where your not supposed to be at.
Jun 24, 2015 4:25am

Greg Seabaugh
But the bad news for the truck driver came when he was arrested at the scene and charged with six violations that include driving while fatigued (which is a Class 4 felony), driving for more than 14 consecutive hours, false report of duty status, brake out of adjustment, automatic slack adjusters required and failure to reduce speed to avoid a crash. And y'all are blaming it on e-logs, Hahaha!
Jun 24, 2015 7:41pm

Darvin Campbell
Sounds like to me Greg Seabaugh that you were paying attention we must have been the only ones to notice
Jun 25, 2015 4:13am

Greg Flynn
This whole argument about falsifying logs is BS. If people would manage their rest time properly, and nap when they were sleepy, there wouldn't be many problems. With the current driver shortage, no company will force any driver to run outside of the law. Drivers need to adjust their routines to the demands of the industry, or find something else to do. I've been OTR for 35 years, and never had an issue.
Jun 24, 2015 7:13pm

David Turner
I had a company write me up and suspend me and fired me for not agreeing to run 2 log book's that didn't work out 2 well for them dot is on that ass like fire now
Jun 23, 2015 8:14pm

Eddie Heeder
First of all I think the rules are bullshit I know when I'm tired or not if I wreck because of poor judgement it's on me.not the rest of the driver's second of all I and I alone am responsible for that truck e-logs paper logs or pushy dispatch doesn't matter I control the truck when I'm behind the wheel so me and me alone is responsible for what happens period
Jun 23, 2015 3:06pm

Tom Gillies
Clint Hughes, I agree with you on that, further the HOS is the culprit. The so called safety advocates have no clue as to how unsafe they have made the highways. Complete and utter lack of common sense.
Jun 23, 2015 11:45am

Roxann Brousseau
Nope, I would rather find another job than to risk it by driving fatigued or any other unsafe manner.
Jun 25, 2015 7:48am

Matt Kreider
You can drive across the country in a rv and kill someone. But don't do it in a 18 Wheeler,then your just a murderer. If you are gonna drive over the 11 hours,your gonna do it with or without a log book..nothing more than a money racket.
Jun 24, 2015 1:46pm

Tracy Canada
Let a man drive when he wants too and there won't be this problem! Making a person drive when they are tired,recipe for disaster!
Jun 24, 2015 4:01am

Chad Klingshirn
Force them to drive, then charge them with murder. Seems like a setup to me. If a guy could stop for a nap and not count against the clock things would go a lot better!
Jun 24, 2015 6:00am

Chad Klingshirn
You got that right. CVSA said it themselves that forcing drivers to drive more during the day has created more accidents in commercial vehicles so they suspended the rule. Of 2-5am.. if the mother fuckers would let us log it how we do it and stop fucking with shit ppl could stop for naps during rush hours and when they get sleepy and there would be no problems.
Jun 24, 2015 6:08am

Tracy Canada
You need to run Chad Klingshirn, you and Ron Ron Bowers, Josh Thornhill can tear shit up!! Lol
Jun 24, 2015 6:18am

Clint Hughes
E logs are the cause of fatigue they force u to push or lose out on ur 14 hour clock a guy used to be able to stop take a nap and truck some more but not with these bs rules so the industry is more unsafe now due to rule makers not crappy drivers
Jun 23, 2015 9:39am

Andrew Bersosa
I run E logs and love them! My day is planned to the "T" , sometimes things happen and my plan (out of my control) is changed. I always felt more tired when I would ,"pluck away" at my trip and in truth, I didn't accomplish as much. Unless , I tore a page out and put another one in, so that I could make up for the lost time. And now I have to preplan my trip from start to stop so that I may maximize my 14. (My 2 cents)
Jun 23, 2015 10:34pm

Jon Rubin
I'm not on e logs yet. For the most part they will be fine just the little things that you can't do with them but on paper you can will suck not being able to do
Jun 23, 2015 10:45pm

Jared Jrod Goff
All company, if say half the dispatchers have never been in the seat. They don't know what it's really like out here. They say go go go... Maybe they should check into the company and their dispatchers.. When your tired. Stop. Plain and simple. No load is worth your life or someone else's.
Jun 23, 2015 7:14am

Craig Farmer
If you feeling fatigued go to bed nobody's life or load is worth having an accident over. The potential for serious injuries are extremely high. Be safe your family depends on you making the right professional decisions.
Jun 23, 2015 8:36am

Doc Gunderson
I have heard of Elogs being altered by the company also. If true just to give drivers back some drive time I would bust that company .
Jun 23, 2015 10:40am

Doc Gunderson
I have heard of Elogs being altered by the company also. If true just to give drivers back some drive time I would bust that company .
Jun 23, 2015 10:39am