Truck drivers always need to be on alert for the common road hazards but there are also those out of the ordinary events that even the most cautious drivers can’t prepare for.

Seasoned long haul truck driver, Myles Hupp, was doing everything right as he drove along the eastbound Interstate 20 near Weatherford, Texas. Then, along came another rig heading in the opposite direction on the other side of the median. Suddenly, that other truck driver lost control and hit the grass median with such force that it caused chunks of mud to violently shatter through the windshield of Hupp’s on-coming rig. Not only was he covered in mud, but the impact lodged shards of glass into his head and arms as well. Luckily, Hupp kept his cool and was able to pull over to safety at the side of the road. He immediately called his wife, Donna Hupp, to let her know that he got a serious mud bath while en route. At first she didn’t understand the severity of what happened and thought that he must have simply had his windows rolled down. Fortunately, Hupp happened to catch it all on video and he sent it to his wife, who has since posted it on-line for all to see. Paramedics soon arrived on the scene and were able to release Hupp after pulling the shards of glass from his scalp. 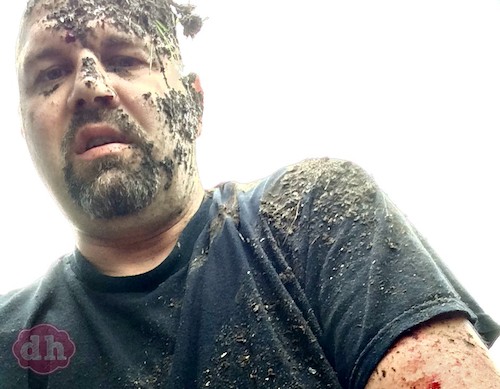 Another incident occurred in Los Angeles this weekend, and while it involves a catering truck rather than a big rig, it’s a crazy road story nonetheless. On Saturday afternoon, at around 12:50pm a catering truck was heading downhill in the steep Hollywood Hills area behind Sunset Blvd when the driver lost control and the vehicle started speeding down the hill. When the driver attempted to slow the truck by rubbing its wheels against the curb, the vehicle instead hopped the curb then slammed into a tree and a pole, critically injuring three women on board. 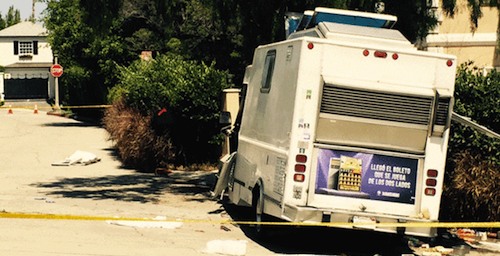 If that wasn’t bad enough, the impact disturbed a beehive and a swarm of angry bees soon descended on the scene. Fortunately, there were no reports of anyone getting stung except the sheriff’s deputy who was the first to arrive and assist the injured passengers inside the vehicle. According to Sgt. Kevin Rasmussen of the sheriff’s West Hollywood Station, the deputy was stung only stung a few times and aside from being treated for slight swelling, he was released from the hospital and is recovering just fine. 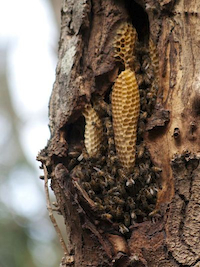