"I Was Being Chased By An Angry Mob!"


Things got crazy in Chicapoo, MA. when a truck driver crashed into a motel, two tractor-trailer trucks, a parked car and then dragged a 2,000-pound boulder down the road until he was finally forced to stop. The explanation he gave police was that he was being “chased by an angry mob”, but not surprisingly police found him to be severely intoxicated with an open container of vodka in his tractor cab. 63-year-old Edward Lynch of Alexandria, Virginia was arrested on charges of drunken driving, leaving the scene of a property damage accident, larceny under $250, and having an open container of alcohol. On Thursday, Lynch plead not-guilty to all charges and the Chicopee District Court judge set his bail at $2,500 cash or $25,000 surety.

According to the arresting officers, there was some truth to Lynch’s story about "being chased by an angry mob." When they arrived at the scene and Lynch finally exited his truck, several people came running from the Burnett Road Pride gas station and nearby Motel 6, and they were all yelling at him. Police said that they put Lynch in the cruiser partly for his own safety and had asked him what happened and if he had been drinking. Although he adamantly denied the drinking, Lynch did tell police that he had struck a truck at the truck stop and when he tried to pull over to stop he had struck a second truck instead. “Lynch then stated that was when several people started yelling at him and began chasing him," court records said. Lynch then continued driving his tractor-trailer fleeing across the street to a Motel 6, where he drove around the building and hit a parked car, as well as a corner of the building’s cinder block wall. "He stated he struck something over there so he left because people started chasing him over there," police said in court records. 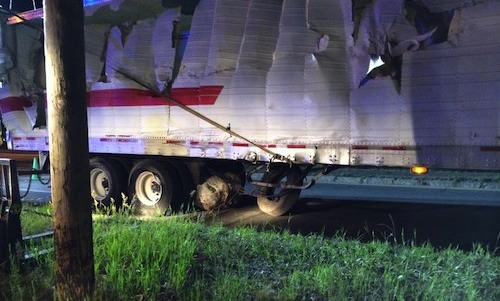 When Lynch proceeded to drive across to the McDonald's restaurant located next to the motel, he ran over a 2,000-pound boulder and simply kept driving, dragging it behind the truck. When police finally arrived on the scene, the tractor-trailer was heading for the entrance of Interstate 291 and they attempted to stop him by turning on their blue lights. "The suspect tractor-trailer unit continued to flee but was unable to due to the large rock dragging under the vehicle," police said.

Police also said that they could immediately smell alcohol on Lynch’s breath and that he was unsteady on his feet. They also discovered an open bottle of vodka in his truck and when they asked him to take a field-sobriety test, Lynch became belligerent. However, Lynch did end up agreeing to take the test and failed miserably. He stumbled all over during the walking test and recited the alphabet as "ABCDEFYNCHIGHFLMNOTXYNG," court records indicated. Lynch also refused a Breathalyzer test, which means that his commercial driver’s license will be automatically revoked. The truck that Lynch was driving is severely damaged and had several flat tires and bent rims. A towing company had to lift up the tractor-trailer with a winch to remove the boulder trapped under the back axle.

Trucking Unlimited
I guess because he refused the breathalyzer...he thinks there is no proof of the DUI. True, but refusal often leads to automatic conviction anyways.
Jun 07, 2015 12:55pm

Marquita Lowry Carroll
Armando, Carmen, I wonder if the guy we talked about earlier, with the crazy bent rims, had an angry mob chasing him too lol.
Jun 06, 2015 6:19am