Tragedy struck a truck driver Tuesday morning after a deer went through his windshield on Highway 126 near Eugene, Oregon. According to the Oregon State Police, 37 year-old Jesse Bastien was driving a 2000 Freightliner truck for the Oroweat bread company, when an eastbound Ford Focus struck the deer just before 9 a.m. The deer flew up into the air and into the windshield of Bastien’s westbound truck. Although Bastien was able to drive the truck to the shoulder of the road, passing motorists who stopped to help him said that he was already unconscious and not breathing by the time they went to assist him inside his cab. They performed CPR until medics arrived on the scene and rushed him to Sacred Heart Medical Center for neck and head trauma. Tragically, he was declared dead upon arrival. 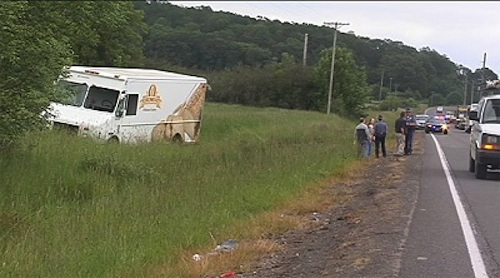 Meanwhile, the truck driver involved in Monday’s fiery collision on the 210 Freeway near Los Angeles has told investigators that he had lost a wheel before losing control of his tractor-trailer. Officer Ryan Bejar of the California Highway Patrol says that they have yet to confirm the exact cause of the crash, but that the tractor trailer had been hauling cars when it jack knifed on the 210 Freeway at around 7p.m. on Monday evening and proceeded to hit a Mercedes sedan and a Ford Pick-up truck before slamming into the center divider near Santa Anita Avenue in Arcadia.

Captain Mike Cate of the Monrovia Fire Department added that when the truck rear-ended the two other cars it proceeded to push them along the center divider as well. When the truck finally came to a stop, it was straddling the median with the cab portion sticking out into the westbound lanes. The impact also sent debris flying into the westbound lanes striking a Toyota sedan, a Nissan sedan and another big rig that were all traveling west. To make matters even worse, the Mercedes and Ford both ended up being pushed over the divider and into the carpool lane of the westbound side, which caused the Ford to collide with an oncoming Toyota sport utility vehicle. 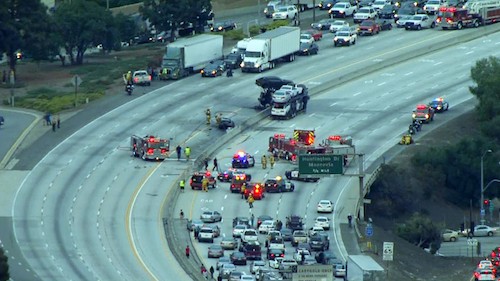 And to top everything off, the tractor-trailer’s fuel tanks had also ruptured, spilling diesel fuel into the road and then igniting into flames. Fortunately, the truck driver and the Mercedes driver managed to escape their vehicles before they caught fire. The good news is that this incident did not result in any fatalities but according to the CHP, the big rig driver and four others were transported to the hospital with minor injuries and a lot of other minor traffic collisions occurred as a result of the incident.