The  on-going dispute over wage theft claims has fired up again and West coast port truck drivers from Los Angeles down to the Mexican border are striking for the third straight day since Monday.

Truck drivers working at the ports of Los Angeles, Long Beach and San Diego began their strike Monday in order to get their employers to start obeying the recent ruling that they're being misclassified as “independent contractors.” According to a spokesperson for the striking truck drivers, the independent contractor classification has been allowing companies to pay the truck drivers less than minimum wage and that this can end up shorting a single truck driver out of $60,000 in pay each year.

The 4 major firms currently being picketed against include Pacer Cartage, Pacific 9 Transportation, Harbor Rail Transport and Intermodal Bridge Transport. But the effects of the strike go much wider and are directly impacting a number of major retail giants such as Wal-Mart, Toyota, Costco, Target, General Electric, Forever 21, Louis Vuitton, CVS, Procter and Gamble, Macy’s, Family Dollar, and JC Penney. During the last three days, San Diego picketers have been specifically targeting trucks delivering cargo to Toyota’s Otay Mesa facility, which is to then be transferred to Toyota’s Mexico manufacturing plants. However the strikers' intentions are to disrupt the company’s cross-border operations, as they have effectively done in the past. 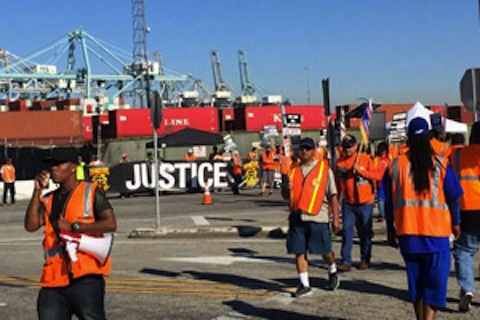 Last November, Green Fleet Systems drayage firm also reached a “comprehensive labor peace agreement” with the Teamsters union. However, the other companies have been standing firm despite the strike continuing over he last three days and representatives for both the Los Angeles and Los Beach ports have even gone so far as to say that their business has hardly been affected and that freight is moving along just fine.

Perhaps its because the picketers at the port marine terminals have been stationed to only target trucks arriving from the four targeted trucking firms and the terminals simply reacted by discouraging those very firms from dropping off or picking up containers over the strike duration. That leaves 800 other trucking firms unaffected and thousands of other non-striking truck drivers still going on with business as usual.

While union officials indicated that the collective strike effort would continue until at least Friday, it has yet to be seen how far they intend to “drive-up” their actions.

What do you think would finally resolve this issue? Is strike action enough?

Rodolfo S Garza Jr.
It's not effective enough. A Nationwide over the road Strike would work. Even if the train took the freight you need the trucks to get it to the stores.
May 02, 2015 7:34am

Dan Guise
lol and really they dont work drive junk but they wanna strike lol wtf
May 02, 2015 7:13am

Rodger Caquelin
Over paid the way it is shut down the ports send them boats back to china
May 01, 2015 6:26am

Chris Cobb
But they got the money so they can bitch and get something accomplished
Apr 29, 2015 6:41pm