Distracted Hazmat Driver Causes Truck To Go Up in Flames


The Wednesday morning commute along Indiana’s southbound I-65 started off with a bang today, when a semi-truck driver carrying chemicals crashed into an abandoned car and burst into flames. Indiana State Police said that at around 5:30 am the truck driver had been heading south near the 38th Street exit, when he began “messing with his radio” and veered off the road, hitting the abandoned vehicle parked along the shoulder. 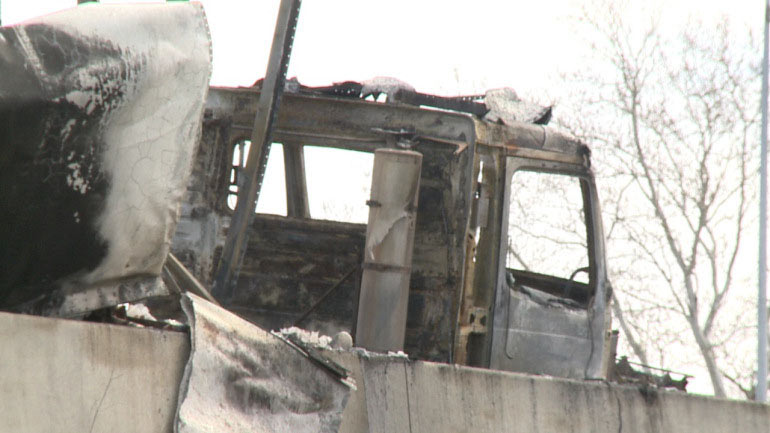 “The gentleman just took his eyes off the road to mess with his radio for a little bit and that perfect storm put that car where he was at as he veered off the road to the right and struck it,” said Sergeant Richard Meyers.

To make matters even worse, the semi-truck had been carrying 17,000 pounds of the corrosive chemical, potassium hydroxide, which immediately escalated the crash into an explosion causing the truck to burst into flames. Hazmat cleanup crews were forced to shut down the southbound lanes of the interstate for nearly three hours. Fortunately, the 35-year-old truck driver managed to escape from his cab with only minor injuries. He later told investigators, he was “messing with his radio,” when he lost control of his truck and state police said that following an investigation, the driver of the truck could face charges.

While the accident did not result in anyone being hurt, it caused traffic to come to a screeching halt and shut down the southbound lanes of I-65 for several hours during the busy morning commute. Firefighters and Hazmat crews battled the fire, and the Indiana Department of Health was also called out to help with the cleanup as well. Eventually the police were able to reopen one lane at around 8 a.m. allowing traffic to start crawling through, but it took nearly ten hours to completely clear the scene.

The Indiana State Police say that the wreck is a perfect example to warn people about the dangers of distracted driving and how easily the catastrophe could have been avoided. “Could’ve been a trooper, could’ve been a highway worker, could’ve been anybody off the side of the road, so you want to make sure you pay attention at all times,” said Sergeant Meyers.

Last May, a similar incident occurred when a semi-truck driver told police he had been reaching for a tissue and suddenly crashed into a retaining wall on Interstate 465. His truck spilled 200 gallons of fuel and burst into flames, forcing the Interstate to shut down for hours. According to distraction.gov, in 2013 distracted drivers killed 3,154 Americans and injured roughly 424,000.

“We have all these distractions that are built into the cars, we have distractions outside of the cars and you’ve got to just have that mindset that it just takes that brief second where you could be involved in an accident and maybe take someone’s life, or take your own life,” warns Sergeant Meyers.

Trucking Unlimited
A strong reminder to keep your eyes on the road at all times, a mere 2 seconds to grab a tissue almost cost this truck driver his life!
Apr 16, 2015 12:02am

Joshua Miller
Dude don't post shit like this.are you up and make us look bad driver nobody's perfect everyone makes mistakes so he rubbed against concrete wall cause of flame and there goes his rig his job and is load
Apr 15, 2015 9:26pm