Police Officer Daniel Segura of Fort Worth, Texas, says it was a single-vehicle accident that started the chain of events that left 5 dead and 12 injured early Sunday morning at around 2:30am. The worst part, is that among those who lost their lives were the good Samaritans who had stopped to help the driver who initially crashed near the Oakland Blvd Exit on the Interstate 30. The victims had exited their vehicles and were assisting the driver along the side of the westbound lanes, when an 18-wheeler carrying the Sunday edition of the Fort Worth Star-Telegram crashed into the original vehicle involved in the accident, then struck several other cars and the people providing "road-side assistance". The big rig then erupted in flames. 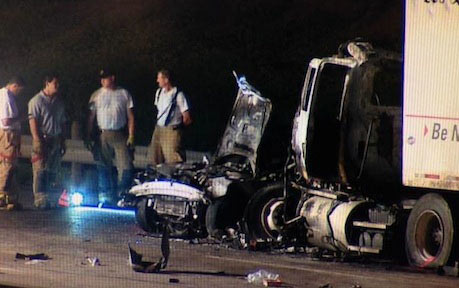 Four people were pronounced dead at the scene and a fifth victim later died at a nearby hospital. Of the 12 people injured, two were hospitalized in critical condition and another suffered serious injuries but is expected to survive. So far the Tarrant County Medical Examiner's office has officially identified two of the deceased victims as 43-year-old Veronica Gonzalez and 42-year-old Mary Hernandez, both of Fort Worth, Texas. The niece of Veronica Gonzalez said that she had spent the night dancing and celebrating at her engagement party with friends. Veronica had been driving home with her fiancée’s sister when they spotted the driver who had crashed on the Interstate 30. They pulled over to see what they could do, as it was simply part of their nature to do so. “When they see somebody who needs help, they always pull over and help them,” said Sarafina Gonzalez.

Family friends of Steve and Tracey Franklin spoke to the media saying that were also among the good Samaritans who stopped to help. They said that Steve Franklin was a member of a local Jeep club that helps stranded drivers during winter storms and someone whose first instinct would be to pull over and help any driver in need. Unfortunately Steve was killed during his final act of kindness and his wife, Tracey, was seriously injured.

The Fort Worth police said that the victims had likely been standing in a lane of traffic when the truck driver came along and didn’t have enough time to stop the 18-wheeler. Police also confirmed that the truck driver was among those injured but did not appear to have serious injuries and it's unlikely that he will face any charges for the unfortunate circumstances that lead to this tragic outcome. The Ryder truck driver had simply been doing his job and transporting copies of the Sunday paper when he came upon an accident that "was already in progress." Lt. Kyle Falkner of the Fort Worth Fire Department said that it has still not been determined what caused the truck to erupt into flames.

It's also still unclear what caused the initial vehicle to crash into the concrete barrier along the freeway and police are still investigating all possible factors.