Experts Say Train/Truck Crashes Ultimately in the Hands of Truck Drivers. What Do You Say?


After a series of train/truck crashes occurring at multiple railroad crossings throughout the US over the past few years, the Federal Railroad Administration (FRA) announced a new campaign designed to increase enforcement and safety awareness at grade crossings. Less than two weeks after their incentive was announced, another crash between an Amtrak train crashed and a tractor-trailer occurred in North Carolina, injuring 55 passengers. Since then, the National Transportation Safety Board (NTSB) has been heavily investigating the cause of that crash and consulting with experts to determining how to better prevent these incidents from occurring at all. 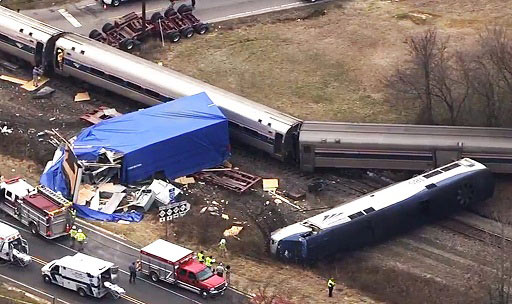 Russell Quimby is the lead investigator for the NTSB and has had over 22 years of railroad accident investigation experience. He says that the answer is better truck driver training and stricter licensing requirements for CDLs. “Many times the truck driver is tired, makes a bad choice or is trying to beat the train. Trucks have a lot more flexibility than a train - the train can't stop – but all the driver has to do is stop and make sure that a train isn't coming," Quimby says.

Alarming FRA statistics found that between 2010 and 2012, train/tractor- trailer accidents occurred at highway grade crossings more than 300 times each year alone and that the total grade crossing incidents for all vehicles and pedestrians had reached a whopping 2,262 resulting in 250 fatalities. While the FRA and railroad companies have been trying to increase grade-crossing safety through public awareness campaigns, technology, enforcement and infrastructure upgrades, the consensus among many experts is that that the major responsibility for train/truck crashes is still in the hands of truck drivers.

Jeffrey Buckholz is president of Buckholz Traffic in Jacksonville, Florida, with 37 years experience in the traffic-engineering field. "The problem with truck drivers is not that they go around the gates. They typically get caught on the tracks," Buckholz says. He further explains that truck drivers sometimes attempt to cross tracks but then find that they don't have enough room to clear it as traffic in front of them backs up. He also adds that the time a crossing warning bell sounds and the train rushes past can be as little as 20 seconds and this doesn't give a driver a lot of time to clear the tracks if traffic has backed up. He suggests that simply increasing the warning time would help a lot in preventing these type of incidents . 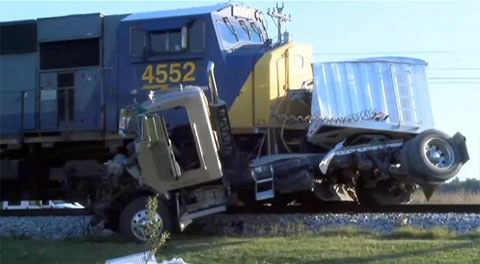 But Scott Turner, president of Scott L. Turner Consulting, in Blairstown, New Jersey argues that the prevention of truck/truck crashes really comes down to the truck driver's Inattentiveness or poor judgment about the length of their trailer. "He thinks he has enough space to clear the tracks but then realizes, too late, that he doesn’t and winds up getting his tail-end clipped by the train." Turner suggests that carriers should give their drivers more incentive to pay attention to safety by offering rewards for incident-free miles as well as providing them with better training to understand what behaviors cause crashes. ""Things like that, in conjunction with other incremental steps, can really make a solid system that helps improve safety… If you can reduce accidents by 20 percent, say, that's money that goes directly to the bottom line as well as saving lives," he says.

What do you say? Do truck/train crashes mostly come down to the ability of the truck driver or are there other factors that should be looked at as well?

Jim Kratzer
Also not mentioned is that the driver did conduct a safety meeting that morning with all the escorts, both civilian and the State Police. That very turn at the railroad crossing was their primary topic. The driver made everyone aware that the turn couldn't be completed in one movement. He had to 3-point the turn. That means he has to stop and back up briefly, to reposition the tractor and jeep, in order to keep the back end of the trailer on the street.The driver wasn't stuck on the tracks, but when he stopped to back up, he couldn't because the State Police Officer at the rear was on his cellphone and not paying attention, pulled up with the load and had truck blocked from doing any rearward movement. Traffic stuck behind the load pulled up with the trooper which effectively sealed the fate of the train and the load.
Apr 04, 2015 6:54am

Dan Everson
As a guy who pulls 13 axle for a living I get so pissed off at these Internet super heroes that have an opinion on what we do when something goes wrong but have no idea how to do what we do. First of all; if you didn't even read the WHOLE article the just keep your mouth shut and second; just because you pull 53' vans or flats doesn't mean that you know what it actually takes to pull the kind of load this guy was pulling. The driver is getting screwed in this situation...plain and simple.
Apr 05, 2015 1:33pm

Terry Evans
Did you hear about the truck driver that was on a plane that crashed? The headline in the news paper read "plane crash. Truck driver involved"
Apr 05, 2015 6:35am

Daniel Chapin
Yes it is ultimately the truckers decisions that will decide any outcome.
Apr 05, 2015 3:46pm

Jeffery Longcore
From what I understand the state of NC is pointing the blame at the truck driver to cover their own ass. I crossed this very crossing a week later. Why in the hell would you send a oversize load down there is beyond me. He shouldn't have even been sent down that way. The state screwed up and is covering their ass by throwing his in the fire and from what I understand the railroad new he was coming through there.
Apr 05, 2015 4:45am

Chris Denney
This accident came down to neglect of calling the train company. And the fact that the state trooper escorting didn't think he he is stuck maybe I should double check
Apr 03, 2015 4:58pm

Dan Everson
Do you realize that even if he called the second he realized that there was a problem it still wouldn't have been soon enough? Do you haul oversized loads? Do you have any idea what you're talking about or do you just have an Internet opinion?
Apr 05, 2015 1:18pm

A.j. Grooms
They said he was stuck on tracks over twenty minutes that was a enough time to stop train and I do haul oversized loads and you Dan Everson should agree the police should be held just as responsible
Apr 06, 2015 5:02pm

Dan Everson
This coming from a guy who works for a moving company who likely doesn't or hasn't hauled oversized loads like a 13 axle that's over 120' long and weighing in over 230,000 lbs. Keep talking super trucker...you're showing your intelligence.
Apr 05, 2015 1:25pm

Timothy Begle
If a train is just out of sight. Traveling as fast as an Amtrak train goes. Your truck gets stuck on the track or you can't make the turn (as in the case in North Carolina). Which one of you super truckers can outrun that speeding train, look at the number on the pole and dial that number in less then a minute. Plus expect the guy answering the phone to get that message to that train in that same minute? Well answer me!! I get so damn tired of Internet experts who haven't a clue of the real world.
Apr 03, 2015 10:12pm

Joe Werner
Get rid of the 14 hour rule since that rule been in place truckers are plum stupid cause there always in a hurry
Apr 06, 2015 10:42am

Steve Oreson
We could not survive if it was not for truck drivers. Without them… How would we get everything we have every day?
Apr 04, 2015 8:59pm

David Holt
Train was traveling slow. Cop should have got up with railroad to let them know there was an issue. Both cop and driver were out if there vehicle when train came. Why are they routing a 164' load on this road. If you know this area in nc there is no reason why they were there. The biggest bunch of b/s is they hauled the damaged building away on a 3 axle step deck with out any incidents.
Apr 04, 2015 4:16pm

Timothy Begle
If the train is a mile away. All the permit reading in the world. All the super hero training. All that bravery. Won't get that train stopped in time. Some trains don't blow the horn until they're less then a 1/4 mile away. Many are almost at the crossing before they blow the horn. Same with the lights and gates. Train is almost there when the gates come down.
Apr 03, 2015 10:16pm

Michael Cummings
My biggest worry when I stop at railroad crossings is getting rear ended. Had some close calls on US Rte 30 in Indiana. Stopping at lighted and gated Rail Crossings with HAZ MAT IS DANGEROUS. Worry about getting rear ended. Also worry about Engine shutting off while I'm still crossing. You go across rough tracks, shakes tractor, engine shuts off because a electrical wire connections comes apart. Your screwed.
Apr 04, 2015 6:13pm