Last week a federal court judge ruled in favor of the Owner-Operator Independent Drivers Association allowing their DataQ lawsuit to continue moving forward. OOIDA had filed a complaint against the U.S. Department of Transportation and FMSCA challenging the accuracy of the data that the department maintains and reports about truck drivers under the Privacy Act. The defendants had then filed a motion to dismiss the OOIDA's complaint, but the U.S. Court of Appeals for the District of Columbia Circuit denied the motion and the case is moving forward. The next step is for both parties to propose a scheduling order for further proceedings before Tuesday, March 24 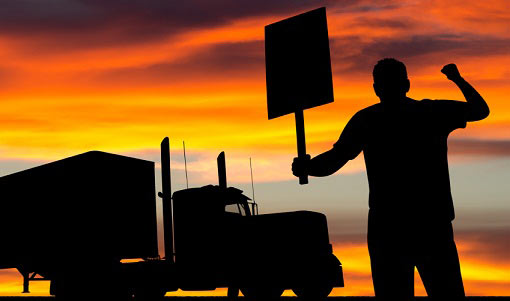 The OOIDA’s complaint claims that the federal agency refuses to delete inaccurate information from its database and continues to maintain and report bad data to the public about drivers violating certain safety rules. The complaint also alleges that the agency continues to use faulty data even when the allegations against truck drivers have been dismissed or received not-guilty verdicts in state court.

The FMCSA provides financial grants to individual states that agree to enforce the federal safety standards governing commercial motor vehicles and drivers. That has allowed the FMCSA to keep a large database called the “Motor Carrier Management Information System” or MCMIS, which acts as a depository of reports of all such state enforcement activity. OOIDA makes the valid argument that under various federal statutes, the FMCSA should also be responsible for ensuring the accuracy of the records in the database.

The main issue to be decided in OOIDA’s case against the FMSCA is whether or not the government maintains inaccurate information in the MCMIS database. But so far it’s looking good for OOIDA since the court has already rejected the government’s argument that it has complied with all federal laws regarding the dissemination of records from the database. OOIDA is also asking the court to order FMCSA to purge the MCMIS database of records of all enforcement actions by states prior to the time a driver has his day in court and after charges against the driver have been dismissed, or after that person is acquitted by a court of competent jurisdiction.

Jim Johnston, OOIDA president and CEO says the FMCSA has no authority to delegate its own statutory responsibility for accuracy to the states. “FMCSA has failed to fulfill its responsibility to ensure the accuracy of the data maintained by it in the MCMIS database,” he said “FMCSA should never report enforcement activity as a ‘violation’ before a driver has his or her day in court or after the driver has been acquitted or the charges dismissed,” Johnston added.

Have you had any personal experiences with the MCMIS inaccuracies?

Tony Morrow
I've been so pissed at this very damn thing. My company disposition has always been in excellent standings until this bs has come a long. Now even the slightest thing that is later to be unfounded has put me close to the top of the list for scrutiny. I used to be pulled in to be looked at about 3 times a year. Now about 2 to 3 times a month. And they're even more zealous about the most minor imperfections than before. This just compounds the problem further. F-ing pricks need to get a real job instead of harassing me!!
Mar 17, 2015 7:17pm