Yet Another Truck Gets Stuck and Causes Commuter Train Crash


Yet another truck/train collision occurred Monday morning when a tractor-trailer hauling heavy equipment got stuck at a North Carolina railroad crossing, causing an Amtrak passenger train to crash and derail. Fortunately, the accident did not result in any fatalities but many of the 200 train passengers did suffer injuries. 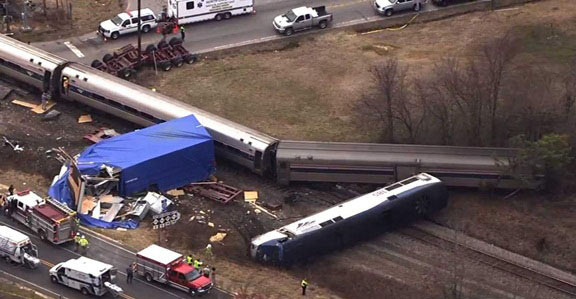 According to local authorities, the train had been heading northbound up the East Coast when the truck driver got stuck on the tracks in Halifax County and had been in the process of trying to get unstuck when the crash occurred. The Sheriff’s office reported that the impact was severe enough to land the train’s engine on its side, completely derail the passenger car behind it and partially derailed the third car.

While there is still no word on the condition of the truck driver, it is believed that he escaped without any life threatening injuries. Emergency workers were on the scene near the Virginia-North Carolina border helping passengers off the train and news cameras captured the passengers emerging from the wreckage with their luggage and boarding onto waiting buses. Charlotte Story was one of the train passengers and told local news that she never heard a whistle and could not tell if the train had tried to slow down before the crash. "There was a massive jerk and we were kind of thrown forward a little bit, and the train came to a sudden stop," she said. Amtrak and local authorities are continuing to investigate the incident while the NCDOT is providing support as needed. It is uncertain as to whether the truck driver is being found at fault for causing the incident.

Meanwhile, the truck driver involved in the recent California MetroLink train crash is not so lucky. Last week, Glenn Steele, the engineer involved in the crash finally succumbed to his injuries after being hospitalized for over a week. The 62 year old died at Cedars Sinai with his wife and two sons by his side. Steele had been the longest-serving engineer for the MetroLink commuter train line and he was at the helm of the train with a trainee when the crash occurred. Although it is still unclear what happened in the front cab car right before the crash, Steele did everything in his power to stop the train and save the lives of his passengers.

Steele’s death may be a game changer for Jose Alejandro Sanchez-Ramirez, the truck driver who abandoned his Ford F-450 after getting stuck on the tracks. He had originally been jailed for suspicion of felony hit-and-run and later released after his lawyer indicated that his inability to speak English forced him to abandon his truck and find help. Unfortunately now that the crash has resulted in the train engineer’s death, Sanchez-Ramirez could be facing heavier charges such as vehicular manslaughter.

Jonathan Coleman
I don't know exactly what happened but I do know he was being escorted by an NC diesel cop because I passed them and the Amtrak about 45 mins before it happened!
Mar 10, 2015 4:32am

Derril Salter
It was an oversize load escorted by state troppers. He couldn't make his turn, so he backed up to reposition. The lights came on when he was on the track. He was not injured and will not be charged.
Mar 09, 2015 10:45pm

Brandon Baker
There is a number on the silver boxes right by the crossing. If you ever get stuck or see anyone call it right away.
Mar 10, 2015 11:59am

Clarence Belcher
If a load like thar is going across track I would think they would call railroad for someone to assist them across just in case they get stuck
Mar 10, 2015 2:14pm

Chris Newlin
The dot trooper escort and the driver both called Amtrak there was no answer at the emergency desk
Mar 10, 2015 5:02pm

Jonathan Smith
I was told he was stuck on the tracks and still nobody alerted railroad
Mar 10, 2015 8:51am