Bonnie Clark, the widow of retired law enforcement officer Wiley Clark, has filed a wrongful lawsuit against Wal-Mart, claiming that both Wal-Mart and Swift Transportation are responsible for her husband's death. In the suit filed last week, Clark’s lawyers say that the truck driver, who works for Swift Transportation, which is a trucking company that works with Wal-Mart, was not only fatigued but that the truck he was driving also had maintenance issues. 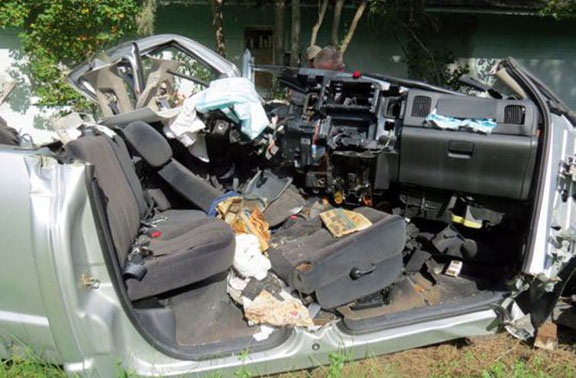 Wiley Clark was a 72-year-old Hawthorne man and recently retired investigator with the Bradford County State Attorney's Office. Bonnie Clark says that she and her husband had just retired together and were starting a new chapter in their lives until he went out for breakfast one Sunday morning last June and never came home. A semi truck struck him head-on not far from his home. Wilbur Peterson had been driving an 18-wheeler driven and crossed a median, killing Wiley Clark and mangling his vehicle in the head-on collision.

“You can’t imagine what it’s like to have two policemen come to your door and tell you that your husband’s dead in a traffic accident and all of sudden you’re making funeral plans instead of travel plans,” says Bonnie Clark said. Bonnie Clark also says it was an accident that simply didn’t have to happen.

According to Clark family attorney, Steve Pajcic, Swift Transportation and Wal-Mart allowed Peterson to operate his rig while he was fatigued. “He had already driven that truck 65 hours in the preceding week and he had been asked to come in and drive for 12 straight nights,” Pajcic explains. He says that he has the driver logs to verify the fact that Peterson was being overworked.

Pajcic also says that Peterson's 18-wheeler was going 17 miles over the speed limit and that the tractor tires were worn down to 1/32nd of an inch, which is a violation of federal standards.

“It really comes down to the bottom line for them. The more you can get out of a driver, then the less you have to pay for the drive, the more profits they make, but we need to tell them with lawsuits like these that they have to pay for mistakes, too.” Pajcic says.

“It’s broken hearts and I don’t want to see other families suffer needlessly,” Bonnie Clark adds. “We need to send a message to these companies that these big trucks can’t be speeding through our little towns.”

Ralph Dailey
Walmart does not put up with anything illegal. This is all on Swift
Feb 23, 2015 5:16pm

John Edmunds
Wow. Walmart had an employee drive something like 17 hours to get to the terminal then start his shift. Just because swift was involved doesn't mean it all swift. Also with something like 30,000 trucks swift is entitled to have some fuckups.
Feb 24, 2015 4:56am

Jason Stearns
Barry Homebrew...you make ni sense and apparently don't understand law and the ability to sue the carrier (swift) who has a contract with walmart and the fact both companies are responsible for driver safety,equipment safety and such. But yes if ups had a contract with amazon and pulled trailers marked amazon and they pushed loads out regardless of safety issues then yes they are both responsible.
Feb 24, 2015 9:05am

Lynnwood Edward Sonnier
No jason you don't understand. I haul for oilfield companies. They pay a company to haul a product. That's it. Swift may have dropped the ball. If u ship something through fed ex and that truck wrecks. Is it ur fault???
Feb 24, 2015 4:17pm

Lynnwood Edward Sonnier
And John the cummins u make to go to work is ur problem. It's not walmarts fault the guy lives 17 hrs away. Maybe he should have chose to make the commute (which in no part is related to his job or driving time) on the day before!
Feb 24, 2015 4:19pm

Mike Towsley
Either it's Walmart's own trucking or any other trucking companies need to stop making drivers or workers being like a slave, over work, or like a robot, we're not machines, we are people just like the rest of us that needs a lot of rest and some time off! That's how this ends up in an accident just like this! Not fair for this poor woman that lost her husband because of this! :-/ This is down right terrible, and yes she deserves a lawsuit against Walmart! I wouldn't blame her one bit!
Feb 24, 2015 12:27pm

Lynnwood Edward Sonnier
Terry they got sued over bullshit with Tracy morgan. That drivers commute has nothing to do with walmart and this doesn't either. Read my previous comment!
Feb 24, 2015 4:24pm

Lynnwood Edward Sonnier
Mike Towsley you must really not have any brains. Walmart has the strictest rules in the industry. 65 hours is legal. This guy didn't even work for walmart. I think walmart should sue her for dragging their name through the mud. I bet if they did these bullshit lawsuits would stop. If you pay fedex to haul a package and that truck wrecks should you be responsible?? They contracted a company to haul a product. That's as far as their responsibility goes. Plus swift uses elogs so if that guy goes over the legal limit that truck will shut down. And swift is governed at 62 so I doubt he was flying!
Feb 24, 2015 4:22pm