Federal investigators busted the owner of an Atlanta insurance agency alleged to have been running an insurance scam that involved up to 900 potential victims, which were mainly commercial trucking companies. The investigation found that between Jan. 1, 2013 and July 31, 2014, a total of $3.7 million was deposited into Kill's personal bank accounts, money that his victims had paid for insurance coverage that never really existed. 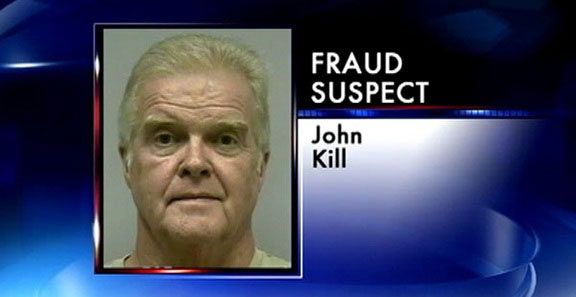 Feds say that the scam was initially discovered by the giant insurance company, Lloyds and once they began investigating, they learned that Kill was preying on commercial trucking companies, (as well as construction companies) and collecting hefty insurance premiums, without securing legitimate policies for his “customers.” Instead, he used the money to fund his lavish lifestyle and pay off insurance claims that were filed with his own company, operating out of his home.

John Kill, 63, of Gwinnett County, Ga., was arrested for the alleged sale of fake insurance policies under the name Appeal Insurance Agency. He was charged with 10 counts of fraud after it was determined that businesses in 10 states had been allegedly duped by the Kill’s scheme. Investigators found files listing commercial trucking firms and constructions companies located in Georgia, Alabama, Arkansas, Arizona, Florida, Mississippi, South Carolina, Texas, Tennessee and Vermont that were all affected by the fraud.They believe Kill has duped up to 900 victims including both individuals and companies out of hundreds of thousands of dollars.

“There may be 750 up to 1,000 individuals that think they have insurance that really don’t. There is a serious financial threat to consumers whenever you have a small operation like this, ran out of someone’s home without proper regulatory oversight,” said Georgia Insurance Commissioner Ralph Hudgens.

While Kill was released from the Gwinnett County jail the day of his arrest on $24,000 bond and is still awaiting trial, he is facing up to 10 years in prison for multiple charges of insurance fraud. Hudgens also said that Kill would no longer be doing any business as he signed a consent order, voluntarily forfeiting his license to sell insurance in the state. Even worse for Kill, is that as of the February 12th complaint filed in the Northern District of Georgia federal court, authorities were able to forfeit all remaining funds from Kill’s five different Wells Fargo accounts, (totaling nearly $730,000), leaving him high and dry.

Steve Johnston
Now they need to bust all the other insurance companies down too. Biggest scam in the U.S. is insurance companies. It would be nice if we could get a return for not filing any claims. I know it doesn't work that way but, sure would give some people incentive to stay covered and drive safer.
Feb 17, 2015 11:10am