Another major winter storm hit the mid-west hard over the weekend, killing two in Nebraska, dropping over 20 inches of snow in Chicago and is heading to the North East still recovering from last week’s blizzard. In addition to causing treacherous driving conditions, the storm halted 2,500 flights on Sunday and cancelled more than 3,600 flights on Monday across the United States. 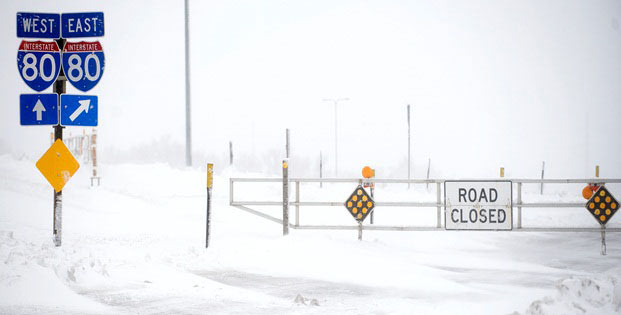 Nebraska suffered the most dangerous driving conditions on Sunday with icy roads and poor visibility causing two fatal accidents. According to the Nebraska State Patrol, a 30-year-old truck driver lost control on Interstate 80 during the heavy snowfall on Sunday morning. The Illinois driver, who has not been identified, was tragically killed when his truck collided with another semi tractor-trailer on the interstate. While the driver of the second truck was not injured, the accident caused major traffic delays throughout the rest of the day.

Slick road conditions also led to a second fatal collision on the highway 92 near Wahoo, Nebraska. Two passenger cars collided, taking the life of Kathleen Schulzkump, who was a passenger in one of the vehicles. The two drivers suffered injuries and are both being treated at Saunders County Medical Center.

Authorities were also forced to close U.S. 6 west of Lincoln and U.S. 34 east of the city for most of Sunday after high winds blew deep drifts across the roadways. The Nebraska Department of Transportation also had to close roads and block parts of both the U.S. 34 and U.S. 136 on Monday.

While Cleveland and other regions of northeastern Ohio remain under a winter storm warning with many roads closed to all but emergency personnel, the Northeast is bracing for a repeat of last week with storm warnings issued across several states, including Pennsylvania, New York, New Jersey, Connecticut, Massachusetts, Rhode Island, Vermont, Maine and New Hampshire. Already, canceled flights, school closures and traffic back ups are creating havoc across the region.

The New England Patriots may have won the Super Bowl on Sunday, but on Monday afternoon another 10 inches of snow had already fallen on Boston setting a new 7-day snowfall record of 34.2 inches and more snow likely delaying the Patriots’ celebratory parade. "We were hoping if we didn't have a snowstorm today, we probably could have announced it this morning, but because of the snow, it kind of sets us back a little bit," Boston Mayor Marty Walsh said.

Although New York isn’t expecting as much accumulation of additional snow, the temperature drop is expected to turn the current rain and slush into dangerous, icy conditions and officials are urging drivers to stay off the roads.