US Finally Lifts Ban On Long Haul Deliveries From Mexico


After a drawn out dispute over safety and regulations involving Mexican trucks, the United States has finally ended the ban on long haul truck deliveries from Mexico. Although the U.S. government had first promised to lift the ban twenty years ago as part of the North American Free Trade Agreement, the Teamsters union has been taking a strong stance against it, arguing that Mexican trucks would be a safety hazard on U.S. roads. 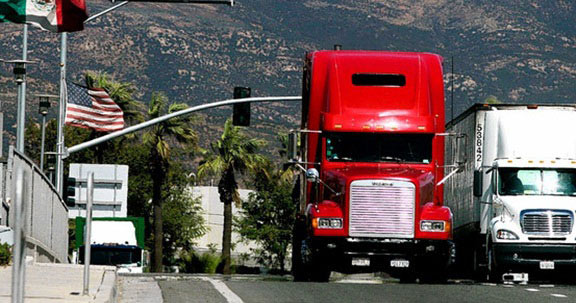 Also part of the NAFTA Agreement, delivery trucks based out of Canada have had free access to the U.S. highways since 1982.

In addition to the concerns about the safety of Mexican trucks, the Teamsters and other labor unions have been voicing other issues such as recent heightened concerns about Mexico’s violent drug war and illegal immigration. The stronghold opposition has been repeatedly delaying the promised provision from taking effect.

But despite the Teamsters’ claims that Mexican trucks are subject to inadequate, poorly enforced regulations and that their drivers are poorly trained compared to U.S. standards, twenty years of data and two pilot programs have seemed to convince the U.S. government otherwise. In fact, some would go so far as to say that the Teamsters’ argument has been “inexcusably misleading”, since Mexican trucks operating in the United States have always had to get permits that require prescreening and regular inspections.

In other words, those in support of lifting the ban argue that Mexican trucks operating here in the United States are regulated by the U.S. government and must follow the same safety standards. The only difference is the nationality of the trucks’ drivers and owners. Supporters even go so far as to say that the Teamsters and other opposition groups have used fear tactics and false claims as a cover for their more self-serving agendas. For example, the Teamsters union could have a vested interest in keeping Mexican truckers off the roads because they are often non-union drivers posing a threat to their unionized interests.

The Teamsters are also accused of having an “official list” of concerns that they often trumpet at the opportune moments and always includes job loss, border security and highway safety to cover their real, self-serving interests.

Whatever the real truth behind the matter is, the ban on Mexican long-haul deliveries has now officially ended and this particular political stand off is behind us.

What is your position on the matter? Do you think the ban lift will directly affect you as a U.S. truck driver?

Louis Papsidero
They should be required to read, write and fluently speak English before they're allowed to cross the border. And their trucks should be DOT inspected before they leave the border crossing.
Jan 15, 2015 11:14am

Ray Sewell
Lots of accidents and do they have a million dollar insurance policy like American trucks
Jan 17, 2015 12:45am