Only hours after our last report about the two fatal accidents occurring on the I-94 in Wisconsin and Indiana, a 193-vehicle pile up occurred about 9:30 a.m. Friday morning in Michigan, near mile marker 90. One person was killed and 22 others were injured as a result of a massive chain-reaction crash that closed the highway for 43 hours. National media coverage also managed to capture a dramatic explosion of an entire semi load of fireworks going off. 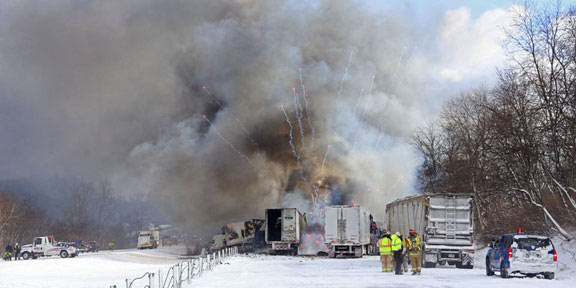 According to the Michigan Department of Transportation, the stretch of highway has a long record and bad reputation for accidents. Between 2008 and 2012, police handled about 850 crashes between mile markers 81 and 88 - which pretty much amounts to one every other day.

On Friday morning, the wreckage involved 177 cars and 76 semi-trucks and occurred on both the east and westbound lanes of the highway between Galesburg and Battle Creek. In addition to a semi-truck carrying fire works, another semi was carrying hazardous material and is said to be what sparked a massive fire that destroyed some vehicles. The worst tragedy is that one person died as a result of the accident. 22 other were sent to the hospital and the highway was closed while crews worked to clear the wreckage until early Sunday morning.

A nearby Kalamazoo towing company filled nearly four lots with the cars and semi-trucks left smashed and burned along the I-94. In fact, McDonald’s Towing and Rescue didn’t even have enough space on their lots and had to use a neighbor’s lot and an additional lot for the spill over. The huge numbers of vehicles were also brought in so quickly that the company wasn’t able to make complete inventory. Many people have had to walk around the lots just to find their vehicle.

“You can see all the different plates: Indiana, Illinois, Georgia, Ohio,” said Doug of McDonald’s Towing said.“When you’re moving 180 cars and get a highway cleared in 12 hours, you aren’t going to know exactly where they’re at.”

On Sunday, Dinah Owiti went to the tow yard to retrieve her car and described her experience of the mass pile-up. “At the end of it I was sandwiched between three cars. I just had this feeling a fire was going to come out. And when I looked on the side, the semi that had hit me — the white semi — there was smoke.”

Other drivers had pulled Owiti out of her car before the semi burst into flames.

When she finally found her car Sunday, all that was left was burned-out skeleton.