This week two eerily similar accidents both involving three semi-trailers along different points of the I-94, have tragically claimed the lives of two more truck drivers. 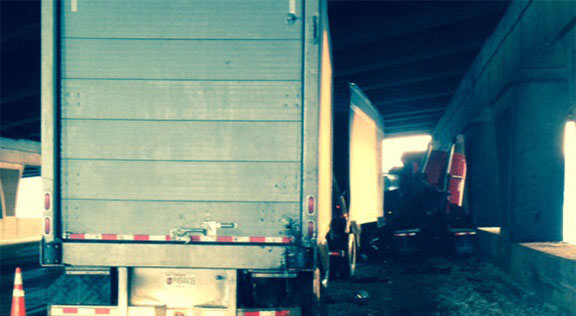 The first accident occurred at 2:50 a.m. on January 7thon the westbound side of I-94 at County Road HH in Eau Claire County. According to the Wisconsin State Patrol, the crash involved three semi-trailer trucks and the preliminary investigation reveals that it began when a westbound semi unit traveling in the right lane began experiencing mechanical problems and had slowed down near Milepost 75. A second semi unit that had been traveling in the same lane didn’t slow down in time and drove right into the rear of the first trailer. Then a third semi-trailer, also traveling in the same lane came along and clipped the rear of the second semi trailer and then jackknifed into the median.

It was the driver of the second semi that suffered fatal injuries and died as a result of the crash. The drivers of the first and third units were transported to Mayo Health System in Eau Claire. The names of the drivers have not been released until the families are notified. The crash is still under investigation by the Wisconsin State Patrol and so far nobody has been charged.

The second deadly accident occurred around 3:45am early Friday morning in the eastbound lanes of I-80/94 in northwest Indiana.

According to Indiana State Police, a 2010 Kenworth tractor bobtail with no trailer lost control and started to spin out. A 2014 Volvo semi pulling double trailers came along and clipped the rear driver’s side of the Kenworth. The Kenworth then went across all lanes of traffic before hitting the concrete barrier wall on the opposite outer shoulder, and then slid along the wall until it struck a disabled 2006 International UPS semi.

The disabled UPS semi had its emergency triangles out and had also been pulling double trailers. The Kenworth clipped the rear of the second trailer, then struck the back of the first trailer and then hit the tractor itself on the passenger side before finally stopping against the barrier and tractor. Unfortunately, it was the wrong place to stop. According to the Indiana State Patrol, the UPS driver, 38-year old Marvin Reinholtz of Indiana, “was found outside partially pinned under the front right tire of his own tractor and the rear left tire of the Kenworth,” ISP said. Reinholtz was pronounced dead at the scene by the Lake County coroner’s office and his family has been notified.

The ISP also said that the Kenworth driver, 32-year-old Ismael Flores of Chicago, did not suffer any injuries from the crash but has been fined for unsafe lane movement. The Volvo semi truck driver, 58-year old James Bauer of Michigan was not injured and was not charged for any wrongdoing.

Colby Brown
It doesn't matter if your a rookie or a 45 year veteran when it's your time to go it's your time to go everybody has an appointment with the creator! If you ain't ready you better get ready because it can happen to any of us in the blink of an eye on today's roads!
Jan 10, 2015 2:05pm

Todd Ross
I would be interested to know how long these drivers have been driving a truck.... Rookie mistakes
Jan 10, 2015 11:35am