It started as a search effort to find 24-year old Trent Michael Cook, after the armored truck he was driving was found empty, with the engine still running, in an alley in Amarillo, Texas. Police first listed Cook as missing/endangered when they found the Rochester Armored vehicle after receiving a call that it was standing unoccupied, with the engine running. 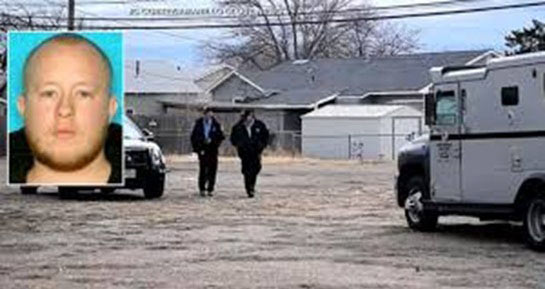 Amarillo PD Sgt. Brent Barbee explains, "Our first concern was with the welfare of the driver in this case, that's what we're looking at immediately, which is where is Trent Michael Cook? Is he OK? Did he leave that vehicle because he wanted to? Did he leave that truck because somebody made him? One way or another our first and best bet is to talk to him."

After police found the armored vehicle Monday morning, the search for the missing driver was full on Monday evening and while investigators have been reviewing evidence and have not confirmed the circumstances of Cook's disappearance, nor the missing contents of the truck – they have issued a warrant for Cook and have already arrested his father.

The warrant issued yesterday charged the missing driver Trent Michael Cook, with first-degree felony theft of over $200,000. Officers also arrested Cook's father, Brian Keith Hodge, 43, for tampering with or fabricating evidence in connection with the case. Cook was last seen wearing his company uniform. He is 5 feet, 6 inches tall, weighs 165 pounds, and has blond hair and hazel eyes.

Not all truck driving jobs require the driver to be armed, and so while Cook was not hired as an armed employee, investigators have developed credible evidence to suggest that Cook has access to a rifle and handguns. Amarillo police also released a statement saying that Trent Michael Cook could be considered dangerous due to this new information.

Investigators also added that there was no sign of a struggle or forced entry into the vehicle and that they had collected information that the suspect had previously discussed how a theft like this would be committed.

However, Cook’s family has also made a public statement saying that he's not involved in his own disappearance or the removal of the truck's contents. Bill Wills, Trent Cook’s stepfather made a statement to the press saying, "There is speculation that he’s involved in this, but his mom and I are steadfast in our belief that he had nothing to do with this and was an unwilling participant."

Do you think the missing truck driver is guilty or not guilty? If he planned this, where do you think he would of gone to avoid being found with that amount of cash?

James McCreight
LoL saw it too. Brinks. Facing south. Passed him comin home from the john hahaha
Dec 25, 2014 6:38am

Adeshola Aicert
I have a testimony to share,,My Name is Mrs Aicert am from the Jamaica am now 30years old Am a Medical doctor in Michigan,I married for about 5years ago without any child then me and my husband go for an adoption of 2kids male/female. Last years something wonderful and gracious happened to me i came across this witch doctor in the internet that promise to help me get pregnant which i totally disagree,,,How can i be pregnant, he ask me not to worry that he only specialize on pregnancy no other. That after the job has been completed there is no any side effect,that was how he told me what to do which i did, could you believe i miss my periodical time that same Month and i was pregnant. Today am now the happiest woman on Earth,,While am i testify to this site i know there are a lot of people that are in this kind of trouble some will decide to commit suicide. please just do and contact him for help make him to understand that Mrs Aicert from Jamaica directed you, his email: orunmilaspellcaster1@gmail.com
Dec 31, 2014 12:04am