Two short-haul truck drivers at the Port of Los Angeles made a significant courtroom victory today in their long-running campaign to stop the violation of their labor rights, which is a widespread practice in the trucking industry. 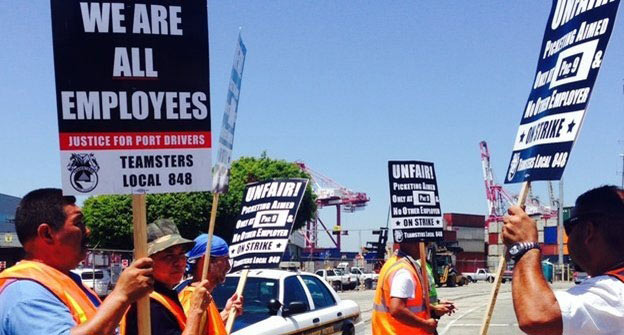 It all started when the two truckers were fired earlier this year after protesting against wage theft and unfair treatment by Green Fleet Systems. They had filed suit asking that their positions be reinstated and that they be treated as full time employees rather than as independent contractors. In early October, a federal judge had in fact ordered Green Fleet to reinstate the drivers but Green Fleet had gone to the Ninth Circuit Court of Appeals to have that ruling overturned.

Today it was announced that the Appeals Court declined Green Fleet’s motion and ruled in the truck driver’s favor. Not only will Mateo Mares and Amicar Cardona get their jobs back, they will be officially classified as full time employees of the company, with all the legal rights and benefits to go with it.

“This ruling is a great victory not just for me, Amilcar, and our families, but for all drivers at Green Fleet Systems who have been too fearful to openly support our effort to become Teamsters, and for misclassified workers across America,” Mares said.

Mares and Cardona are only two among many port truck drivers in southern California that have been continuously going on strike to try to obtain full labor rights. The have been retaliating against the companies that purposely classify drivers as independent contractors, so that basic labor laws such as payroll tax, minimum wage, and overtime laws don’t have to be followed. In fact, the “loophole” of misclassifying employees as contractors can save these employers up to $4000 per year and it doesn’t just happen in the trucking industry.

But for truck drivers, being misclassified as a contractor can cost a lot more because it also means having to pay for their own truck repairs, tolls, insurance, gas, and numerous other charges that the company would otherwise cover for full time employees. Many port truck drivers have also been on a wider spread campaign, filing hundreds of wage theft complaints alleging they are owed millions of dollars in back pay.

Do you think today’s court ruling is the start of widespread change for the better?