It was a merry morning in Maryland for drivers who happened to be riding along the I-270, when the door to a GardaWorld Security company armored truck malfunctioned and spilled thousands of dollars onto the roadway. You can imagine that for the many motorists who suddenly saw cash flying in the air and into their view, it became a mad dash to pull over and quickly grab up as much as they could. 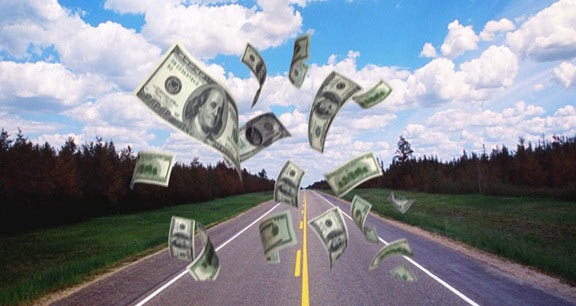 Describing it as a snow globe of money, David Minnich saw everything unfold first hand. "Everyone hit their break lights and there was like a cloud of money in the air, and it was just flying all over the place," Minnich said.

Derek Finke happened to be driving to work during the incident as well. "I was driving southbound and saw it happen northbound. I saw the armored truck and a bunch of traffic behind it. I didn't know what had happened," Finke said.

The Maryland State Police certainly know what happened and they’re calling it an illegal cash grab. Greg Shipley of Maryland State Police explains that a malfunctioning door lock on the armored transport vehicle caused a moneybag to fall out of the truck and motorists made the mistake of assuming the cash was up for grabs. "The driver did his best to get over to the shoulder, but by the time he got out of his truck, it was too late. It was thousands of dollars at least," Shipley said.

Amanda Ziadeh is one driver who agrees with the police. "It was crazy. People were parking and running out and taking cash. I think you would know not do that,” he said.Even hours later there were still people spotted pacing the shoulder of the highway for any cash that may have been missed.

The Maryland State Police had also been scouring the scene and with the help of a K-9 they only managed to recover about $200. While the total amount missing is not confirmed, it’s being investigated by GardaWorld Security firm officials.

In the meantime the police are warning those who managed to capture some of the flying cash could face criminal charges if they don’t return it. They are going over traffic cameras to try and identify the vehicles that had pulled over in the area. In fact, one woman already turned in $1100 and police are commending her for honesty and urging others to follow her lead.

Do you think others will come forward? What would you do?