Stay Metrics reports that the recent study is published at a time within the trucking industry where several carriers in the country are seeking solutions to ease the shortage of drivers across the board, with a figure of driver deficit at 50,000, according to the American Trucking Association.

According to Tim Hines, CEO of Stay Metrics, the report conducted by the company revealed that age is not the only contributing factor to the turnover rate, as some sources in the industry may have previously suggested.

“Contrary to popular belief, ‘Millennial’ drivers are only slightly more likely than middle-age Gen X drivers to leave their carriers,” said Hindes. “The study shows age is a factor, but we don't see that impulsive decision making we often associate with youth as a leading cause of early driver turnover.” 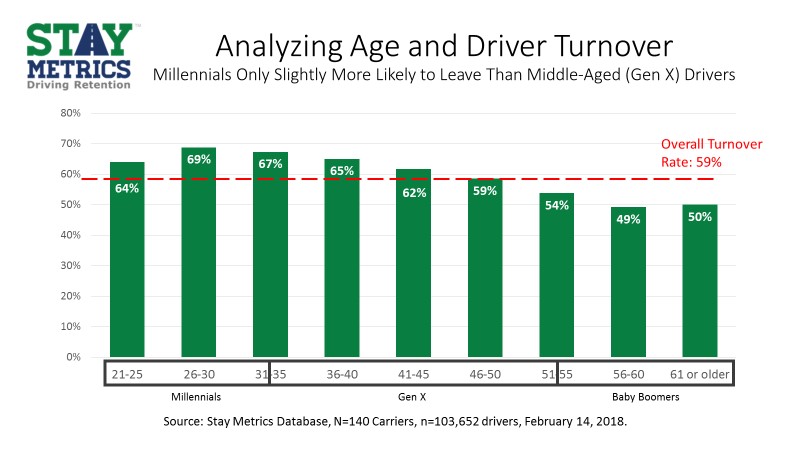 In relation to age as a determining factor in the driver shortage, Stay Metrics cites the bill introduced to Congress in March of this year by the American Trucking Associations, The DRIVE-Safe Act, which if passed would allow drivers between the ages of 18 and 21 to operate across state lines pending they meet rigorous training requirements.

Stay Metrics reports that a significant factor in driver turnover rates is the lack of professional experience that many younger drivers are facing, particularly those under the age of 25 who may see fewer job alternatives to driving than more seasoned drivers.

Additionally, the study shows that driver turnover peaks between 26 and 30 years of age at 69% turnover, decreasing by two to three percent in the successive age groups in 5-year increments, with the lowest turnover rate for drivers at the 56 to 60 years of age at 49 percent turnover.

More findings and data from the study may be found at Stay Metrics’ site.