More details have been released about Sunday’s high-speed chase between a Tennessee truck driver and the Ohio State Police. It started with 61-year old Ronald Weaver allegedly shoplifting pet supplies and other items from a Sandusky area Family Dollar store and then when police tried to pull him over, he ignored their requests and led them on a 75-mile long high-speed chase instead. 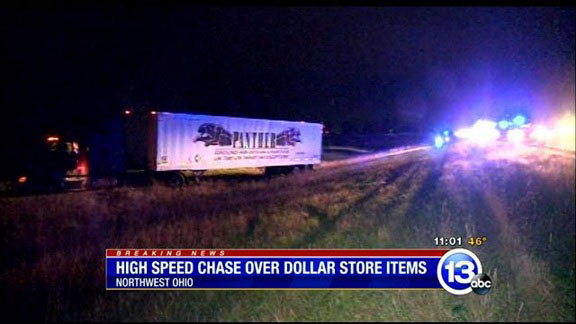 According to the police report, it was about 6:30 p.m. Sunday evening when Weaver stopped at the Family Dollar in Sandusky Plaza and began to browse around the store. About 15 minutes later, the store employees heard the alarm go off, alerting them to Weaver who was blatantly carrying a handful of items right out of the store. A female employee ran to the door and asked Weaver what he was doing and basically old him he had to pay for the items. Instead, he responded by dropping several items in the parking lot, according to the police report. The clerk also told police that she was stunned at how open this person was about shoplifting.

After ditching some of the loot that included air-fresheners, pet shampoo and a pack of light bulbs in the parking lot, Weaver still had a lamp, a can of dog food and a dog sweater in his possession when he jumped into his big-rig and fled the scene. His semi-trailer had been filled with a pickle delivery and he nearly hit someone on Cleveland Road as soon as his dangerous trip began.

A Sandusky police Officer had tried to stop the tractor-trailer on Washington Street, but Weaver continued driving and went onto the Ohio Interstate 2, heading west through four different counties. The chase lasted over an hour, collected dozens of state troopers along the way and reached speeds of up to 95 mph. The troopers had even dropped “stop sticks” numerous times during the chase, and even used a “commercial-vehicle version” to try and stop the 18-wheeler.

Nevertheless, Weaver managed to keep running on his rims after popping all of his tires. He finally gave up the pursuit near Bowling Green and he was taken to a Toledo hospital to be treated for minor injuries. Mental health issues could have been a major factor in the incident and Ohio State Highway Patrol Lieutenant Brett Gockstetter said that Weaver is being evaluated at Mercy St. Vincent Medical Center.

The Sandusky police also said that Weaver will likely be sent to jail upon his hospital release, as he's now facing a felony charge of fleeing and eluding, as well as a misdemeanor count of theft.