For the past three years, the Obama administration has allowed 13 Mexican trucking firms to cross the border and carry freight in and out of the United States. The provisional operating status was part of a three-year pilot program to collect and evaluate data concerning cross border trucking operations and safety on US roads. 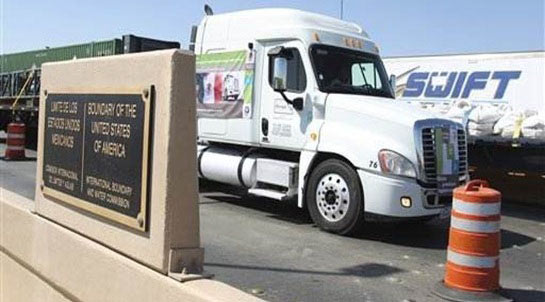 The program ran its duration and expired at the beginning of October, but failed to reach any conclusions about the safety of cross border operations. The government hasn’t yet indicated what would happen next and various commodity groups are nervous Mexican tariffs might resume.

In 1994, the U.S. and Mexico agreed to allow each other’s trucks into the interior of their countries to transport goods as part of the North American Free Trade Agreement, but trucks were not to compete with domestic trucking within the country. In 2001, the World Trade Organization found the U.S. in violation of the agreement for not allowing Mexican trucks and authorized Mexico to retaliate. In 2007, the Bush administration initiated a pilot program allowing some Mexican trucks to make deliveries to Chicago. But the Teamsters opposed the program, citing safety and job loss concerns, and by March of 2009, Congress had cut funding and ended it.

Mexico retaliated with tariffs of 5 to 45 percent on U.S. goods and expanded it in 2010. Some 99 products were valued at $2.4 billion by the U.S. Chamber of Commerce when they were targeted in 2009, 2010 and 2011. Washington apples, pork, dairy, fruit, grain, potatoes and Christmas trees suffered huge losses as a result of the tariffs, so in 2011 another agreement was reached to renew the pilot program and end the tariffs.

“The purpose of the program was to evaluate the safety of cross-border, long-haul operations,” Marissa Padilla, a spokeswoman for the Federal Motor Carrier Safety Administration said.

But just prior to this most recent pilot program ending, Todd Spencer, executive vice president of the Owner-Operator Independent Drivers Association, wrote a letter to the FMCSA on October 1st saying that too few Mexican truckers participated in the program to meet congressional requirements for statistical validity. “Only two Mexican carriers accounted for more than 81 percent of inspections and 90 percent of border crossings. Further, safety regulations have largely been unenforced on Mexican carriers. But FMCSA staff gave the impression in July that it hopes to extend or make the program permanent”, Spencer said.

Mark Powers, vice president of NW Horticultural Council addressed the ongoing problem, which has yet to see a solution. “This is a very sensitive issue. The government conducted over 5,000 truck and driver inspections during the pilot and hopefully it gained what it was looking for and a regulatory decision can be made and we can move forward,” he said.

What do you think? Will there ever be a win-win solution for all sides?

Thurston Milligan
Obama did something right by letting this end!
Oct 21, 2014 9:12am