What started as stand-off between two truck drivers at Love’s Truck stop Tuesday night, ended with 50 year-old Zachary Pender from Shrevport, Louisiana being subdued with a Taser gun and charged with aggravated assault of a police officer. 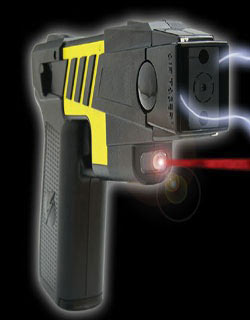 According to the police, the officer was called to the Love’s Truck Stop along Route 11 at 8:47pm, after reports of an accident that was also causing a traffic hold-up. The officer arrived on the scene and began investigating the auto accident in the rear parking lot of the truck stop. He found that two tractor-trailers were involved and that the drivers were engaged in a heated argument, both refusing to move their trucks. The stand-off and their refusal to move their trucks was causing traffic to back-up along Harrisburg Pike.

When the officer tried to intervene, Pender began arguing with him and displayed “threatening behavior” that included jumping on the other driver’s truck, according to the police. When the officer attempted to detain Pender and place him under arrest for disorderly conduct, Pender reacted by swinging around and punching the officer in the face. The officer then used the Taser to subdue Pender and he was taken into custody with the assistance of a deputy from the Cumberland County Sheriff’s Office.

Police say the officer suffered “a concussion, blunt trauma to the head and internal contusions” and was treated at the Carlisle Regional Medical Center, then later released. According to police, Zachary Pender is being charged with felony aggravated assault on a police officer and disorderly conduct. He is currently being held in the Cumberland County Prison and his bail is set at $30,000.

It isn’t known whether Pender was under the influence of alcohol or drug or what other factors might explain his behavior. He is scheduled for a preliminary hearing Oct. 20 before Magisterial District Judge Paul Fegley.

What do you think about police using Tasers to subdue aggressive behaviour?