A tanker truck driver died instantly Friday morning after a hit by a wrong way SUV caused an explosion that sent flames shooting hundreds of feet in the air. The tragic incident occurred near a gas station located at the intersection of Franklin and North Claiborne Avenues in New Orleans. 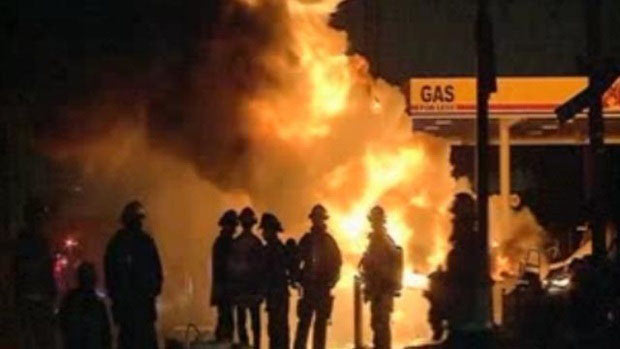 The New Orleans Fire Department was called to an auto fire at Quicky's Discount Store around 2:30 a.m. and a spokesperson for the department said that when the first crew arrived at the scene, the cab of the diesel truck was already completely engulfed in flames. Before the firefighters could even get the water hose hooked up to a nearby hydrant, the fire had already spread to the tanker and caused the entire truck to explode. It was a 3-alarm fire that sent flames shooting high into the sky.

Officials say that their preliminary investigation reveals that an SUV had been driving the wrong way down a one-way street and ran into the tanker-truck, causing the truck driver to lose control. The tanker-truck then crashed into the sign at a nearby 24-hour gas station/convenience store and immediately caused the truck’s cab to catch fire, impeding the driver’s ability to free himself from the wreckage. Meanwhile, the 24-hour gas station was evacuated, as well as residents within a half-mile radius of the location. Police also closed off traffic to the area.

When the firefighters were finally able to get the flames under control enough to get to the cab of the tanker truck, they determined that truck driver did not make it out alive. The female driver of the SUV had fled the scene and was later located by police at her home. Police say she had minor injuries and that she took a blood and breathalyzer test. As the results of the tests have yet to be confirmed and the crash investigation is still ongoing, the charges against the woman are still pending.

The victim’s name has not yet been released, nor has the name of the SUV driver. While no fire fighters or other nearby people were injured, more than 500 residents lost power during the fire, but it is already being restored.

Obviously the real tragedy in what occurred today is that a truck driver lost his life while simply doing his job.