After what may seem to many as a year-long waiting period for the unveiling of the electric semi-truck, Tesla officially announced the release of the commercial trucking vehicle during a presentation at the Hawthorne Municipal Airport in Los Angeles Thursday evening.

According to Musk’s presentation, the semi has the ability to haul up to 80,000 pounds and can run for 500 miles between charging periods at maximum load, as well as a semi-autonomous feature that was explored in Tesla CEO Elon Musk’s presentation last night.

Musk also reported that the tractor features a great deal of speed, with the semi being able to make it from zero to 60 miles per hour in just five seconds without the trailer attached.

In regards to the electric component of the truck, Wired reports that the truck will charge at a faster and efficient rate, with the ability to charge 400 miles of drive time in one half hour, due to “hyperchargers” which are more powerful than the standard “supercharger.”

Musk also reported that the trucks will come with auto-pilot, a system that utilizes two screens in the cab for monitoring auto-braking systems and an “autopilot” function, though both concepts still require a driver to control them. 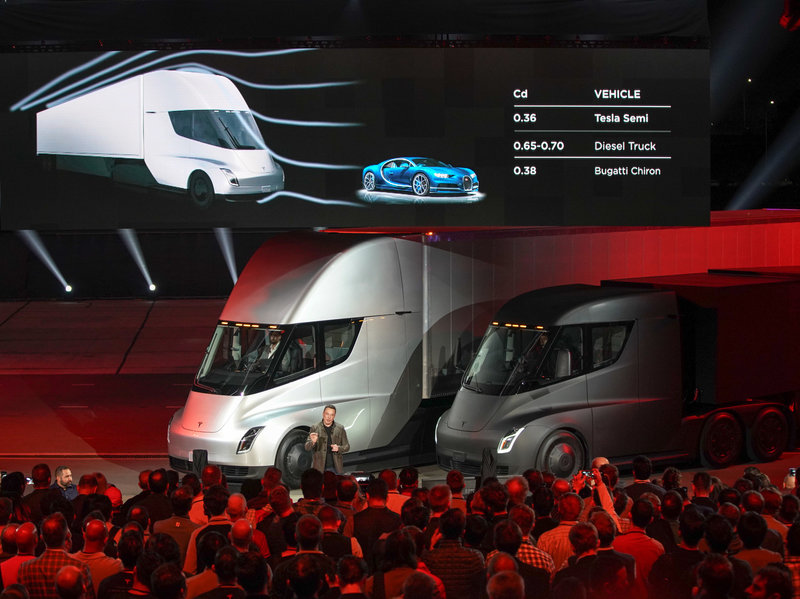 Wired reports that Musk did not necessarily touch upon fully autonomous driving, though some sources in the trucking industry speculate that a more autonomous option is on the horizon.

In the wake of the Tesla semi unveil, trucking company J.B. Hunt announced in a news release that the company has placed a reservation in order to buy "multiple Tesla Semi tractors" which will reportedly be used primarily on the West Coast.

J.B. Hunt President and CEO John Roberts reported in the company’s press release that the eventual purchase of Tesla semi trucks will add to the company’s sustainability initiatives as well as company plans to use new technology.

"Reserving Tesla trucks marks an important step in our efforts to implement industry-changing technology," said Roberts. "We believe electric trucks will be most beneficial on local and dray routes, and we look forward to utilizing this new, sustainable technology."

NPR reports that Tesla has not yet released a price point for the semi truck, however, in Musk’s presentation, a estimated cost of operating the electric tractor-trailer would be approximately $1.26 per mile, as compared to the price of operation of $1.51 per mile in a diesel truck.

NPR’s Emily Sullivan reports that electric motors may be advantageous for commercial driving in some respects, while it may present some challenges that traditional commercial vehicles do not present.

More information regarding Tesla’s semi-truck is expected to be released in the coming months.