President Trump is now targeting truck drivers to sell his tax reform plan to America’s low and middle-income earners. While the tax plan has been criticized for mostly catering to high-income earners at the expense of lower- and middle-class earners, the White House is saying otherwise. 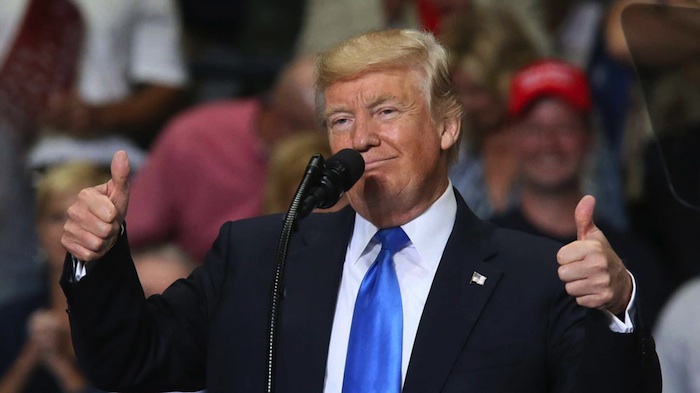 “Truckers will be the No. 1 beneficiaries of President Trump’s tax plan,” White House Press Secretary Sarah Huckabee Sanders said during a press conference Tuesday. “They keep our economy moving, literally, and they are excited about the president's tax reform plan, which will create more jobs and empower workers and families to keep more of their hard-earned money.”

On Wednesday, the President will be touting his tax plan to a crowd of Pennsylvania workers, including hundreds of truck drivers, attending his scheduled appearance in Harrisburg, Pennsylvania at 5:45 pm EST. As the “the lifeblood of our economy” he plans to address truck drivers specifically and will highlight ways the trucking industry will benefit from his proposed tax plan.

"When your trucks are moving, America is growing. That is why my administration is taking historic steps to remove the barriers that slow you down. America first means putting American truckers first,” reads the speech excerpts released by the White House. "Trucking is the number one employer in about 29 states around the country. And truckers will be major beneficiaries of the president's tax reform plan in several different ways."

Trump plans to explain how the GOP tax-reform framework will benefit truckers by lowering their tax rates, boosting manufacturing and making it easier for families to pass their trucking businesses onto their children. He will also highlight how the plan will simplify tax filing for truck drivers and benefit them through a larger standard deduction, as well as cuts to the small business tax rate, which he says would benefit those who file their taxes as pass-throughs.

In addition to appealing to truck drivers, Trump will also make the case that the typical American family would get a $4,000 pay raise under the tax plan.

"We will eliminate the penalty on returning future earnings back to the United States, and we will impose a one-time low tax on money currently parked overseas so it can be brought back home to America where it belongs. My council of economic advisers estimates that this change alone would likely give the typical American household a $4,000 pay raise,” the president will say according to excerpts.

Jeff Spriet
I didn't realize there was a shortage in diesel Paul. If there is a shortage maybe we should stop making so much gasoline, since it is so much cheaper (must be making too much via your theory. I wonder where this kind of demand was ten years ago when the price of diesel was cheaper than gasoline. Must have been moving freight a different way then.
Oct 12, 2017 5:37am

Kenneth P. Kelly
Supply and demand! Remember when there weren't as many diesel picks and 4 wheelers out on the road? It was a lot cheaper back then.
Oct 14, 2017 4:01pm

Timothy Gulledge
It's not so much a supply/demand issue as it is an epa, California, and uncle Sam limiting the emissions on those dirty dirty diesels. Cost of production goes up, the consumer eats the cost.
Oct 15, 2017 2:01am

Grayson K Eyster
Mr. President...I voted for you. I believe in you. I believe that together we can make America great as it once was. If you truly believe that trucks keep America running then please call off the DOT dogs. Cut their budgets, roll back their mandates and ALLOW the truckers of this country to do what we are meant to do...DRIVE AMERICA FORWARD!!!
Oct 14, 2017 2:39pm

JimSharon Kangas
He is saying whatever will keep people amused and afraid of checking things out ...its called critical thinking. He claims all kinds of shit and delivers nothing. Except money to himself and to those who line his pockets. Listen to a multitude of outlets vs just his favorite.
Oct 14, 2017 9:35pm

David Hess
You're an idiot. PPE deal alone he did a saving this country billions. A deal he did for beef selling to China is putting our cattle farmers back in business and hiring hundreds and hundreds and hundreds of people. You need to quit listening to the evening news they don't put nothing on there have all the good he's already done for this country. I keep your close-minded head and live your life under a rock
Oct 15, 2017 9:34am

Jaroslav Nehyba
State and local police need to take care of real job instead of harassing us hard working truckers...500 pounds over all overloaded resulted in $2500 fine for being oveloaded between 3rd and 5th axel!!!
Oct 15, 2017 1:07pm

John Thomas
Drivers are still being used and rushed to get their loads on time even carrying oversized and overweight loads
Oct 14, 2017 1:55pm

Martin Groseclose
Funny he is talking about a plan that isn't even a plan yet. No truck driver you don't make enough to worry about estate tax. I'm gonna give you 4000 and my family and I are going to get billions. Fair trade.
Oct 15, 2017 11:21am

Ronney Tucker
If you watch any other news than Fox News you will never hear anything good about this president. Democratic are mad because they don't have there free ride on American dollars any more. Thanks be to God that hears our prayers.
Oct 15, 2017 9:02am

Samuel L. Hughes Jr.
It's not the Democrats or republicans getting free rides it's those who are less fortunate, and that is not polical it's economic...someone in your family even extended family has needed help...anyone in your family needs help...dont wine...just sign over your paycheck ...all who voted for that shithead will eventually get what they deserve.
Oct 15, 2017 10:46am

Ronney Tucker
There has never been a time like this it our history that a president has been attacked for wanting to help the people of this great country. God is involved in giving every person in this country an opportunity for a better life for every family 👪. For to long the democratic have partied on our money and they are on the attack mode. During the election was watching the news and I said,Lord I believe that Mister Trump could and would help this country and that would be great but it doesn't look good and l had said that out loud.And about 3 seconds later I heard this, Do horses eat hay!!!!; I started laughing 😆. I know now God you can and will if that is your plan. I haven't voted for forty years but I sure did this time. We have needed this president for along time, Thank God his timing is perfect 👌 Ron Tucker I have over thirty years in trucking and planning to start a new company!!!;
Oct 14, 2017 2:35pm

Thomas Martinez
Got has nothing to do with humans electing a very confused man as you too are. Attacking even his own party and appointees. Yes God help us. No disrespect meant.
Oct 14, 2017 3:03pm

Larry Lane
Cori Youngblood: So your check was not on time agan. Maybe you should try working. That wsy you would get a check every week. Not everg 30 days. The trantys are out and killer Hillary will never be in office. So get over it.
Oct 14, 2017 7:01pm

David Hess
Thomas Martinez you're a fucking idiot. Reasoning taxes on parties cuz they're against him to. Because he's taking the money out of their pockets and taking away their free ride. Which is all the Democrats want. The pp deal alone as save this country billions of dollars. Not to mention what he did was clean coal in Virginia thousands and thousands of jobs. He's done this all on his own without any support from anybody
Oct 15, 2017 9:34am

Laura Hickey
You are a religious freak that will believe anything the giant orange tells you.
Oct 15, 2017 6:14pm

Tom Posel
Thomas Martinez, you are right. When God looks down on Earth, he doesn't see political parties, much less nation's. God only sees those who accept and reject His Son, Jesus Christ. Christians in America are decieved by following men who belong to Luciferian secret societies that do not exault the Name of Jesus Christ. President John F Kennedy warned America about the dangers of secret societies in the US Government. Yet, Christians still continue seek leadership in Men who own strip bars and casinos, grabbing women by their lower private body parts. We have become a society that labels men by soft spoken words for the moment, rather than measurement according to the Gospel of Jesus Christ, the Word of God. We have become a land of hypocricy judging those who have sinned against humanity as Adolf Hitler who murders 6 million Jews, yet America has murdered over 54 million unborn children in Government funded abortion clinics. This country kills 1,300 unborn babies weekly in abortion clinics, yet we point a hypothetical finger at Islamic terrorists for murdering 34,000 Christians. AMERICA WILL NEVER BECOME GREAT UNTIL THE NAME OF JESUS CHRIST IS PUT INTO THE VERY GOVERNMENT THAT HAS BECOME A HONEY BEE FOR SATAN. In "God" we trust? What God? Satan is a God. This country failed to implement the Name of Jesus Christ into its historical founding. The Masonic Order doctrine of "Freedom of Religion". The Bible clearly states in the 1st Commandment, Thou shall have no other God's before me. That's not Freedom of Religion. Yet we continue to seek leadership in men who belong to the very secret societies President Kennedy warned America about. My all men seek the Lord Jesus Christ in their hearts and rid their lives of sin that separates them from the Heavenly Father of Jesus Christ. The change starts with YOU.
Oct 22, 2017 4:29pm

David Adams
Truckers would get payrais by doing away with elogs, trying to stay awake an be ontime on elogs = rollover,trump if you wont to shin doaway with elogs then i promis youll have the trucker on your side. Ps, lower fuel cost
Oct 14, 2017 4:16pm

Thomas Kirkpatrick
Don't get me wrong I appreciate anything Mr. Trump can do for my pay check, but I think the industry could benefit from someone really looking into the problems with the HOS.
Oct 16, 2017 7:48am

Abdul Waheed
What a crock of bullshit coming from the worst administration this nation has ever seen. Wants to divide Americans!
Oct 14, 2017 2:39pm

David Riggleman
No the Obama administration has been the worst
Oct 14, 2017 4:06pm

John Thomas
Some construction zones are way to fast to drive through, and what is the deal with the concrete pillongs that stretch for 5 to 10 miles with onloy one lane open, plus there needs to be more rest areas for drowsy drivers
Oct 14, 2017 2:00pm

Allen Manning
Trump we need you to get the dumb ass regulations especially elogs taken off of the truckers
Oct 14, 2017 1:28pm