Trucking Company Gets Tough Against Texting


Note to our readers: Apologies for any misunderstanding regarding the accident involving the Colorado woman. There are a number of outlets reporting that particular story and while some indicate the woman was driving a truck, a few others indicate that it was a car. The report this article initially cited indicates "truck" in the headline, but throughout the video both terms "truck" and "car" are used. The only footage of the vehicle appears to be the interior of a small truck.

At no point did this article intend to misrepresent or offend commercial truck drivers in any way. Our intention is to report the facts and provide a forum to express your views.

The original story as follows:

Certainly nobody wants to end up like the latest “story gone viral” character that was texting while driving and ended up with a guardrail in her butt.The Colorado woman crashed her truck over the weekend while texting and driving, causing part of the metal guardrail to pierce through the hood of her truck, through part of her thighs and buttocks, and then into the back of her seat. 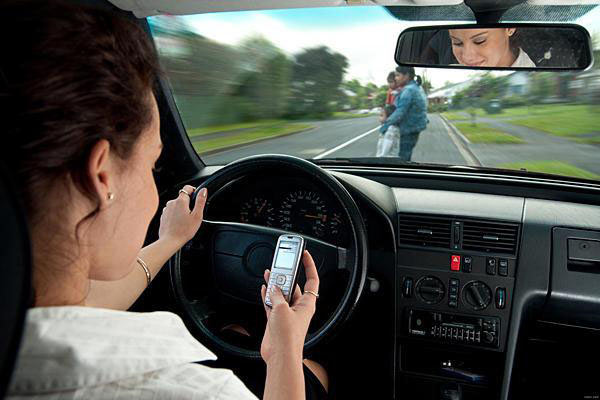 While the FMCSA have already implanted rules specifically prohibiting truck drivers and bus drivers and drivers who transport placardable quantities of hazardous materials from texting or using mobile phones while operating vehicles, the threat of fines and/or driver disqualifications don’t seem to be doing enough to deter many drivers from distracting themselves with their phones.

Now, a Mechanicville based company, DeCrescente Distributing Co., has decided to take matters into their own hands by implementing technology that block texts, calls and Internet use while their drivers are on the road. The device automatically impedes cell phone and tablet use while their company trucks are in motion. Too much?

The company Vice President Tom Turcotte, doesn’t think so. “When a call or text the natural, human nature is to grab it and see who it is. The bottom line is we want to get everybody home safe and to keep everyone on the road safe,” he explains. The company that provides DeCrescente with the call-blocking technology is called Cellcontrol. Cellcontrol charges DeCrescente $70 per vehicle for the hardware and a $65 annual fee for each truck using it.

Jerry Woitkowski supervises the company’s drivers and says that although they didn’t like it when the changes were first implemented over a year ago, everyone seems to have adjusted to the change and understand the reasons behind it.“Whenever you institute something like this, you expect to get some pushback from the drivers, but they are happy,” he said.He also says that they just didn’t realize how often they were getting bothered by calls and that he himself has had to make adjustments as well. Instead of contacting drivers as soon as a reason comes up, he’s had to learn to wait until they’re off the road.

Tom Turcotte agrees that everyone in the company has had adjust to the fact that they can’t get a hold of their drivers right away. “I have to be patient as well,” he says. He also explains that the company transports beverages over a territory covering 11 counties, which means drivers can be as far as an hour away. But drivers also make between18 to 20 stops a day, which means there is plenty of time for them to return phone calls and texts. The point is that they’re doing and not risking their lives and the lives of others by being distracted when they’re on the road.

What do you think?