With Hurricane Irma set to strike Florida on Sunday, Gov. Rick Scott has issued a state of emergency and mandatory evacuation zones in major coastal areas that include Broward County, Miami-Dade County, Monroe County and Collier County. But with thousands of residents trying to flee the storm’s deadly path, the state is also now dealing with gas shortages and traffic back-ups on major routes.

On Thursday, more than 41% of stations in Gainesville were already out of gas, 35.8% of stations in the Miami-Fort Lauderdale area were also reported to be completely out of fuel, 34% in West Palm Beach-Fort Pierce area and more than 30% in the Fort Myers-Naples area were also running dry. Since Florida has no refineries and relies on fuel to be shipped and trucked in, the problem is made worse with evacuation traffic causing major delays and forcing trucks to wait in long lines at fuel racks. Mr. Scott announced Thursday that in order to help replenish the supplies at a faster rate he has directed Florida Highway Patrol to escort fuel trucks along their delivery routes. 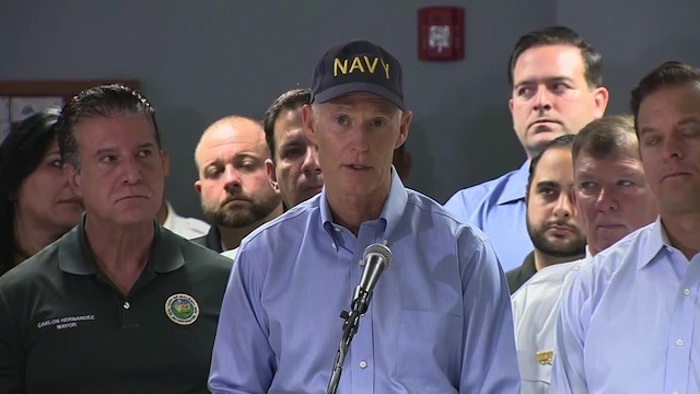 “We know fuel is important and we’re absolutely devoting every state resource to addressing this,’’ Scott said at a press conference. He also announced that Transportation Secretary Elaine Chao has lifted federal regulations to get gas into Florida quickly and he has called upon the governors of Alabama, South Carolina, Georgia and North Carolina to lift their state weight and driver regulations for commercial vehicles making deliveries to Florida.

While there is still fuel being shipped into Florida’s ports, the window for those deliveries is also fast closing as the storm nears. The U.S. Coast Guard announced it plans to close south Florida ports by Saturday and major fuel terminals that supply Miami are also expected to begin shutting down Thursday and Friday.

Irma is a Category 5 hurricane that has already devastated communities across the Caribbean and killed at least 10 people. Weather analysts predict it will hit southern Florida early Sunday. Gov. Rick Scott has urged Florida residents to follow evacuation orders but reminds everyone that it's better to travel short distances to find shelter within their county rather than traveling hundreds of miles out of state.

“We have traffic cameras on every major roadway and are clearing traffic issues in real time to keep people moving,” he said.